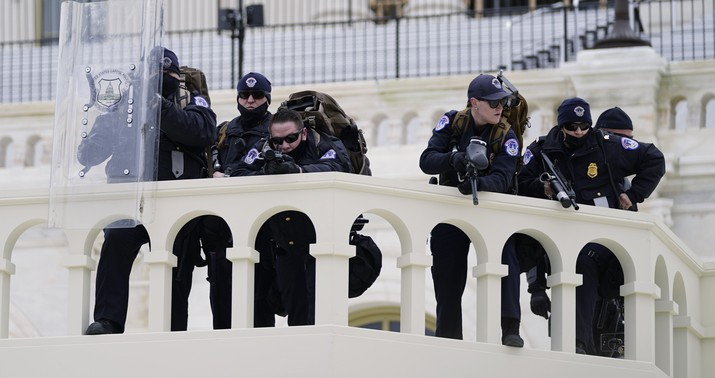 Former President George W. Bush left no doubt about how he feels about what took place today at the Capitol. He issued a statement comparing it to something you would see in a “banana republic” and also labeled it an “insurrection.” In case there’s any doubt based on his statement below, the title given to this on his website was “Statement by President George W. Bush on Insurrection at the Capitol.”

Laura and I are watching the scenes of mayhem unfolding at the seat of our Nation’s government in disbelief and dismay. It is a sickening and heartbreaking sight. This is how election results are disputed in a banana republic – not our democratic republic. I am appalled by the reckless behavior of some political leaders since the election and by the lack of respect shown today for our institutions, our traditions, and our law enforcement. The violent assault on the Capitol – and disruption of a Constitutionally-mandated meeting of Congress – was undertaken by people whose passions have been inflamed by falsehoods and false hopes. Insurrection could do grave damage to our Nation and reputation. In the United States of America, it is the fundamental responsibility of every patriotic citizen to support the rule of law. To those who are disappointed in the results of the election: Our country is more important than the politics of the moment. Let the officials elected by the people fulfill their duties and represent our voices in peace and safety. May God continue to bless the United States of America.

Bush wasn’t the only person using that word today. His brother Jeb used the same word, but didn’t leave President Trump out of his statement.

The President has provoked the disgusting events at the Capitol today. He has gone from creating chaos to inciting insurrection. Mr. President, accept your defeat, go home to Florida and let our elected officials do their jobs and rebuild confidence in our democracy.

We gather today due to a selfish man’s injured pride and the outrage of his supporters whom he has deliberately misinformed for the past two months and stirred to action this very morning. What happened here today was an insurrection, incited by the President of the United States. Those who choose to continue to support his dangerous gambit by objecting to the results of a legitimate, democratic election will forever be seen as being complicit in an unprecedented attack against our democracy. They will be remembered for their role in this shameful episode in American history. That will be their legacy.

President=elect Biden also used it in his remarks today:

The president-elect described the conduct of the pro-Trump extremists on Wednesday as an “insurrection” and said the behavior “borders on sedition.”

As did Sen. Merkley:

The building is now secure, and Senators are heading back to the chamber to complete our democratic duties. We will not let violent insurrection derail our democracy. The votes will be counted, and the American people's choice will become president on January 20. pic.twitter.com/gtwXo3JWsX

What happened today was an insurrection, an attempt to overthrow the government by people who claim to love America but obviously do not.

Donald Trump incited this mob, and his loyalists in Congress helped enable it. They should all be held accountable for this national tragedy.

Is this, technically, an insurrection? It certainly was violent at times with people breaking windows and charging toward police. Some of the people who stormed the Capitol were allegedly armed. I didn’t see anyone pointing a weapon (except for police and Secret Service) but some may have been carrying.

One woman was shot and killed by police in the midst of all of this. There’s also the matter of the three pipe bombs found at various locations including the Capitol today. We don’t know who left those yet but it certainly sounds like scenes from an insurrection.

If you still think that word is too strong, consider that many, many people on the left have jumped right over insurrection and are instead using the word “Nazis.” I’m not going to provide examples but that’s trending on Twitter now with 175k tweets about it so far.