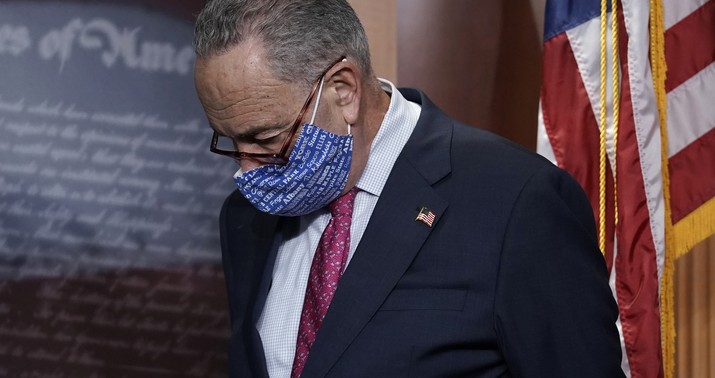 The Georgia special elections are a week from tomorrow and officially Democrats are enthusiastic about the chances for Jon Ossoff and Raphael Warnock to win their elections and hand Democrats control of the Senate. But according to NBC News, Democrat are struggling with fundraising for the two races and behind the scenes Sen. Schumer is pessimistic about the Democrats’ chances:

Outside Democrat groups and high-dollar donors spent big to try and help Democrats regain control of the Senate in the last election — pouring in hundreds of millions of dollars in the weeks leading up to November 3rd. Now, after the party performed poorly in down-ballot races, Senate Minority Leader Chuck Schumer, D-N.Y., is no longer meeting with donors, a source familiar with the matter told NBC News.

Schumer is “pessimistic” about Warnock and Ossoff’s chances in Georgia next week and doesn’t want to ruin donor relationships, the source adds.

“This is absolutely not true and this anonymous ‘source’ has no idea what they’re talking about, and it’s really sad NBC published it. Schumer has diligently made calls and fundraised for both Georgia candidates and is optimistic about their chances in January,” said Justin Goodman, a spokesperson for Schumer.

Give the strong pushback from Schumer’s office, NBC News must have had a lot of confidence in the source to publish this anyway.

So with the outside money spigot turned off (or at least turned down) Ossoff and Warnock are warning they need more donations. There’s no doubt about that part of the story because NBC News got hold of a memo written by the campaign managers from both camps which stated, “To win this election in 8 days, we need to continue our historic efforts to turn out every single voter — but we won’t be able to do that if our fundraising revenue continues to fall.”

Both Warnock and Ossoff have raised big money, significantly more than their GOP rivals. Here are the totals published by Politico this morning:

Ossoff led the pack in fundraising, raking in $106.8 million from Oct. 15 through Dec. 16. He spent $93.5 million in that same time period. (Here’s Ossoff’s filing.) Warnock, who is running in the special election, followed him at $103.4 million and spent $86.1 million (Warnock’s filing). The Republicans were massively outraised by their Democratic challengers: Sen. David Perdue brought in $68.1 million, spending $57.9 million (Perdue’s filing) and appointed Sen. Kelly Loeffler raised $64 million, with almost none of that coming from self-funding, with $48.6 million in expenditures (Loeffler’s filing, which was submitted on Wednesday).

Despite this glut of money, both campaigns are now crying poverty. According to Sen. Chris Murphy, he got a call saying the campaigns yesterday saying they need $5 million for the final get-out-the-vote effort.

Hey @brianschatz and @CoryBooker – got a call from the Ossoff/Warnock campaigns yesterday. They are about $5 million short on meeting their final week GOTV budget. Can we do one last, final final 2020 fundraising drive tomorrow?

Crooked Media’s Jon Favreau is also saying the two campaigns need money to stay on TV in the last week:

Yes, Ossoff and Warnock have raised a lot. But the GOP dark money is pouring in this last week, just like it did right before the general, and we need to make sure these guys can stay on TV everywhere in Georgia for the final days.

Overall it sounds like the Democrats are worried about their chances which is good news for those of us who would like to see both Warnock and Ossoff lose.