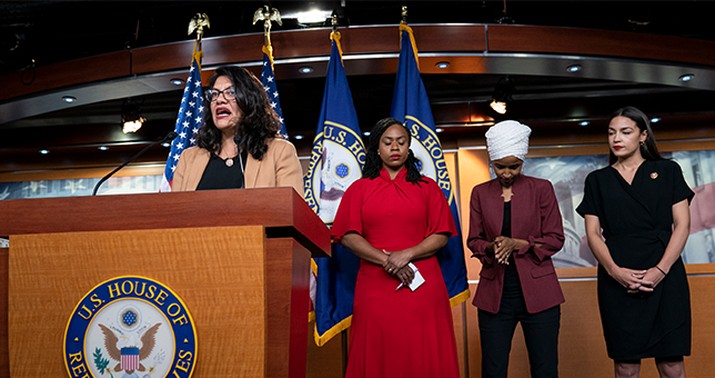 In the past two days I’ve written about Democratic moderates’ criticism of the far left wing of the party, in particular AOC and the Squad. Rep. Conor Lamb said that messages in support of “defunding the police and banning fracking” made it very difficult for him to win re-election in Pennsylvania. Lamb said, “the rhetoric and the policies and all that stuff — it has gone way too far. It needs to be dialed back.”

Yesterday, House Majority Whip James Clyburn joined in that criticism: “Stop sloganeering. Sloganeering kills people.” The slogan he was referring to was “defund the police.”

But the far-left wing of the party is not backing down. Both AOC and Squad member Rep. Rashida Tlaib fired back at the moderates. Last night Politico published a story focused on Rep. Tlaib’s pushback:

Rashida Tlaib isn’t apologizing for wanting to yank money away from bad police departments. She has no second thoughts about her embrace of the Black Lives Matter movement, or for wanting to aggressively fight climate change…

“We are not interested in unity that asks people to sacrifice their freedom and their rights any longer,” said Tlaib, whose Michigan district is among the poorest in the country. “And if we truly want to unify our country, we have to really respect every single voice. We say that so willingly when we talk about Trump supporters, but we don’t say that willingly for my Black and brown neighbors and from LGBTQ neighbors or marginalized people.”

Tlaib and other top progressives have been circulating a memo with their takeaways from the election results. The memo was prepared by Justice Democrats, the Sunrise Movement and other far left groups. It opens by acknowledging that progressives are being blamed for poor results:

As we speak, Congressional Democrats are debating why they underperformed and some have been quick to blame progressives. There is no denying Republicans levied salient rhetorical attacks against Democrats, but these will continue to happen as they do every cycle. We cannot let Republican narratives drive our party away from Democrats’ core base of support: young people, Black, Brown, working class, and social movements who are the present and future of the party…

Scapegoating progressives and Black activists for their demands and messaging is not the lesson to be learned here. It was their organizing efforts, energy
and calls for change needed in their communities that drove up voter turnout.

This is a clever attempt to create a common enemy, i.e. “Republican narratives” but what the memo overlooks is that the Republican narrative is effective because it’s true. Saying that the left wants to “defund the police” is considered an unfair attack by moderates Dems because Biden is against it. But it’s a completely accurate description of what the Squad wants. Voters simply aren’t on board with that and the result is that the far left creates an uphill battle for Democrats in swing districts.

Also, I’d like to see the authors of this screed tell Rep. Clyburn to his face that he’s “scapegoating…Black activists.” I think he’d have a strong reaction to that.

The memo goes on to highlight this NY Times piece advising progressives how to combine race-baiting and class warfare to create more effective attacks. I mention it because the left is really invested in this idea so I think you’re going to see a lot more of this in the future.

Finally, we come to what I consider the truly clueless part of the memo. In this section, the progressives argue that, hey, it’s not progressives losing seats in the House, it’s the moderates:

This brings us to AOC who has turned some of these talking points into memes which she posted on her Twitter feed yesterday:

I just want to highlight this one particular meme. Notice that claim in the upper right corner:

The claim that 2/3 of Americans support Medicare for All is intentionally misleading. As the Kaiser Family Foundation pointed out, that’s only true until people learn about the actual trade-offs, including the fact that they won’t be able to keep their current insurance:

KFF polling finds more Democrats and Democratic-leaning independents would prefer voting for a candidate who wants to build on the ACA in order to expand coverage and reduce costs rather than replace the ACA with a national Medicare-for-all plan (Figure 12).

Not even Democrats say they are eager for another remake of the health system. AOC’s meme is intentionally trying to mislead people in that regard.

So pointing out that 8 Democrats who oppose M4A lost their seats is not an argument for M4A. It’s actually an argument in support of what Rep. Clyburn and Rep. Lamb have been saying, i.e. when the far left talks up these extreme positions it’s the moderates who take the hit. And this meme shows exactly that. AOC is using the losses of moderates because of her rhetoric (and others) as proof that moderates are just losers.

What AOC is implying (upper left portion of the meme) is that if these moderates had only embraced M4A (and defunding the police), they’d have survived. It would help to know exactly what swing districts she’s talking about but I don’t think that’s going to work in every case.

This really is the crux of the issue. AOC runs in a far left district in New York and thinks that someone with her views could waltz in and win Conor Lamb’s reddish district in western Pennsylvania. I don’t think that’s likely and her very mixed results in the primaries suggests it’s far from a given but that’s what she’s pushing on the party.

This battle within the party between the left and the far left will continue until AOC and the Squad have wiped out all of the moderates. By that point, Republicans may control the House again.