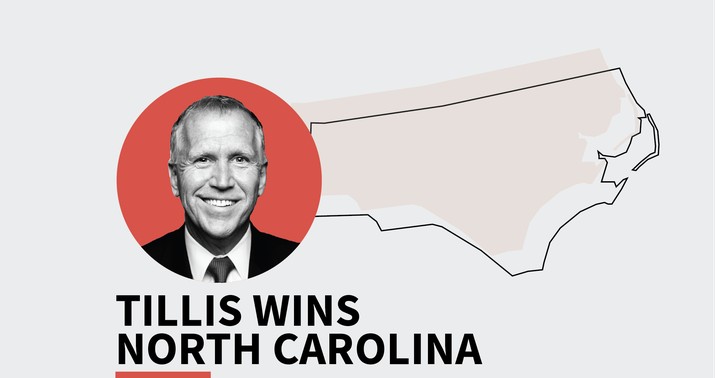 This race was called by Decision Desk HQ earlier today but it appears no one else called it:

However, a couple hours ago, Democrat Cal Cunningham conceded, so now the AP is reporting a win for Tillis in what is now the most expensive Senate race in history:

Democrat Cal Cunningham conceded to incumbent Republican U.S. Sen. Thom Tillis in North Carolina on Tuesday, saying “the voters have spoken” and it was clear Tillis had won…

In North Carolina, Tillis led Cunningham by 94,500 votes, from among more than 5.4 million votes counted so far. Additional absentee and provisional ballots are being counted. Counties finalize their results on Friday.

“I just called Sen. Tillis to congratulate him on winning reelection to a second term in the U.S. Senate and wished him and his family the best in their continued service in the months and years ahead,” Cunningham said. “The voters have spoken and I respect their decision.”

Cunningham accepted defeat after outraising Tillis during what became the most expensive U.S. Senate race in history. All together, the two campaigns and outside groups spent $282 million on the general election, according to the Center for Responsive Politics.

My statement on the results of this race: pic.twitter.com/dWo5gipxw8

Sen. Tillis called in to Fox News to talk about his win. He said that Cunningham had conceded graciously and blamed the tight race on the vast spending involved. He did not mention the elephant in the room which was the affair that was discovered between Cunningham and a public relations consultant in the final month of the race.

Our race in North Carolina is over now, but we’ve got to keep working to defend the American dream by holding the US Senate. Join me in fighting to re-elect @KLoeffler and @Perduesenate in Georgia. pic.twitter.com/6EHbvvcOYk

Here are some of the messages congratulating Tillis:

Congratulations to @ThomTillis on a hard fought win! Thank you to the great people in my sister state of North Carolina! Now let’s go win Georgia! pic.twitter.com/onQ4o8RoX5

With Tillis’ victory, Republicans now hold 49 seats to 48 for Democrats. The outstanding seats are the two in Georgia which will be going to a special election and the race in Alaska. Republican Dan Sullivan is expected to hold the Alaska seat. He currently leads 62.3% to 32.1% with 61% of the votes in.

Finally, it’s worth noting that Decision Desk has also called the state for President Trump but again it seems no one else has done so yet.