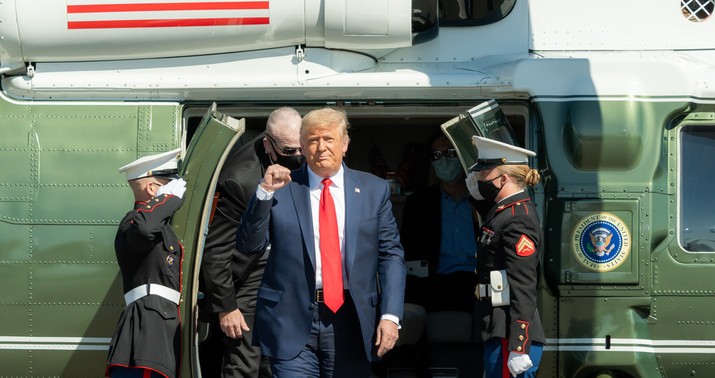 The final NBC/Marist poll before the election shows a tie between Trump and Biden in Arizona:

In Arizona, which Trump won by more than 3 points in 2016, the candidates are tied at 48 percent each among likely voters, with a combined 4 percent undecided or voting for someone else.

(Among all registered voters in the state, it’s Biden 48 percent, Trump 47 percent — down from Biden’s 5-point lead in July.)

Most other recent public polling in Arizona shows Biden with a slight lead, though within the margin of error…

In Arizona, 76 percent of likely voters say they have already cast ballots, and Biden is ahead with them, 56 percent to 42 percent. But among the 24 percent yet to vote in the state, Trump leads, 66 percent to 26 percent.

A couple of other recent polls, Reuters and Emerson, have shown Biden with a slight advantage (+2) in Arizona. The Real Clear Politics average which includes the new NBC/Marist poll now shows Biden at +0.5.

All of these results suggest a toss-up which will largely depend on whether or not Republicans really turn out election day. The Senate race is also looking tighter than it did in the last NBC/Marist poll but Mark Kelly still holds a 6 point advantage in this final poll:

McSally is widely viewed as one of the most vulnerable Senate Republicans on the ballot Tuesday, and her contest with Kelly may decide whether Democrats are able to retake control of the chamber. The RealClearPolitics average of recent Arizona Senate polling has Kelly ahead by 5.8 percentage points.

The NY Times also published a story about the contest in Arizona today. There’s lots of hope expressed by people on the left that this is the year the state will go blue but here’s how the story opens:

For months, for years, Democrats have said that 2020 is when Arizona goes blue. But Patti Thompson, who joined fellow Republicans on Saturday in a state party office decorated with cardboard cutouts of Presidents Trump and Ronald Reagan, was not hearing it.

Even before state G.O.P. leaders urged the volunteers to ignore the polls showing that Democrats were ahead in Arizona, Ms. Thompson, a 72-year-old party activist, professed nothing but optimism.

“I’ve never seen energy like we’re seeing now,” she said, dressing to reflect her confidence in a Women for Trump T-shirt emblazoned with an image of a stars-and-stripes stiletto and holding a bedazzled mask in her hand. “People care about saving our country. You can’t let the liberals take power. We cannot let them run our country.”

We’ll find out tomorrow (hopefully) if Ms. Thompson was right.