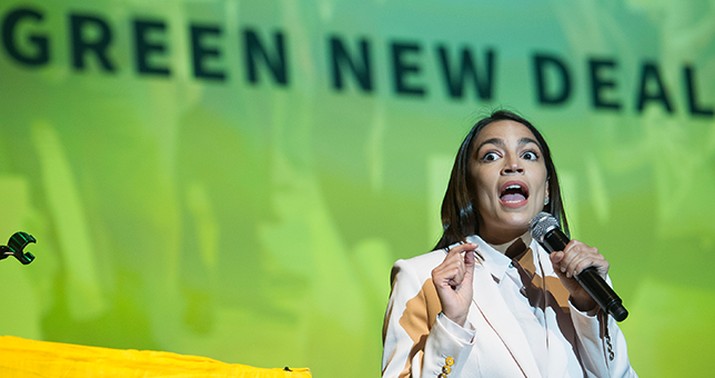 Today Vanity Fair published a profile of Rep. Alexandria Ocasio Cortez which has to be one of the puffiest puff pieces ever written. It’s like a ball of cotton candy floating on a cloud. The entire thing from start to finish presents AOC as a uniquely talented candidate without any discernible flaws. Every detail of this piece is crafted to present her as a kind of icon, or as the piece itself dubs her a “neopolitical icon,” who is at once ready for the White House and yet still just “Sandy” from the block to her friends:

Most of Ocasio-Cortez’s family and close friends call her Sandy. A few, like Representative Ayanna Pressley, go with “Alex.” But becoming AOC—and @AOC—has simultaneously vaulted her into a pantheon of triple-initialed legends and, alternately, given a handy tagline to the right’s worst nightmare. Her beatific face is commodified on twee Etsy greeting cards (“I AOC It’s Your Birthday”) and stamped alongside those of RBG and Frida Kahlo on “feminist prayer candles” and “Latina icon stickers.” Conservative attack ads depict her as socialist villainess. One especially disturbing spot shows a photo of her face on fire before cutting to a pile of skulls.

“It’s very dehumanizing in both ways, strangely, both the negative and the positive,” the congresswoman tells me one afternoon from behind the desk of her Bronx campaign office.

And with all of the adulation comes a lot of threats. In fact, threats are really the only opposition to AOC that gets any real attention to this piece:

A month into Ocasio-Cortez’s first term, a Coast Guard lieutenant and self-described white nationalist was arrested in Maryland with a stockpile of guns and a plot to kill Ocasio-Cortez, Senator Kamala Harris, Pelosi, and others. His internet search history included “where in dc to [sic] congress live.” He eventually pleaded guilty to federal drug and gun charges…

The death threats seem to spike in concert with Fox News rhetoric. “I used to wake up in the morning and literally get a stack of pictures that were forwarded by Capitol police or FBI. Like, ‘These are the people who want to kill you today,’ ” she says.

But the piece is quick to suggest none of that can stop her from fulfilling her destiny as a future candidate for President:

Ocasio-Cortez’s charisma and raw talent are often compared to Barack Obama’s. Not three years into her congressional career, speculation abounds about a future presidential run, with everyone from Howard Dean to Cardi B rooting for it. No sooner had Kamala Harris been chosen as Joe Biden’s running mate than chatter began bubbling about a 2024 primary between Harris and Ocasio-Cortez, who turned 31 in October and would only narrowly make the 35-year-old age requirement.

“I’ve told her, I fully expect that she’s going to run one day, and that she should,” former Housing and Urban Development secretary and 2020 candidate Julián Castro told me. “She absolutely has the talent, the dynamism, and the leadership ability.”

AOC is cagey about her future goals but it’s already clear her stardom goes way beyond politics:

AOC is the perhaps the only member of Congress who moonlights as a beauty influencer: Sharing her go-to red gloss—Stila’s Stay All Day Liquid in Beso—translated to a sales spike. “Every time I go on TV, people ask for my lipstick,” she says.

The only negative thing the piece can find to say about AOC is that she lacks enough votes in Congress to be effective. So it ends with her vow to help more far-left progressives get elected. And who knows, maybe she’ll have some success. The success of Bernie Sanders certainly shows there is an appetite for socialism among young people. But I think there are still a lot of people in America who don’t support AOC’s views and, contrary to the Vanity Fair piece, they aren’t limited to crazy people making death threats.

At some point “Sandy” is going to have to deal with the real costs of her agenda. Even with the media eagerly rolling out the White House red carpet for her, I don’t think she can get there on icon status alone. Yes, I know people will argue that’s exactly what Trump did but even if you think that’s true, how has it worked out for the last four years? If she did make it to the White House the resistance to AOC would be every bit as strong as it was to Trump from day one. There’s just no way she breezes through this in the way Vanity Fair seems to imagine she could.