HuffPost: After Ginsburg died, I joined the Satanic Temple to fight for abortion rights 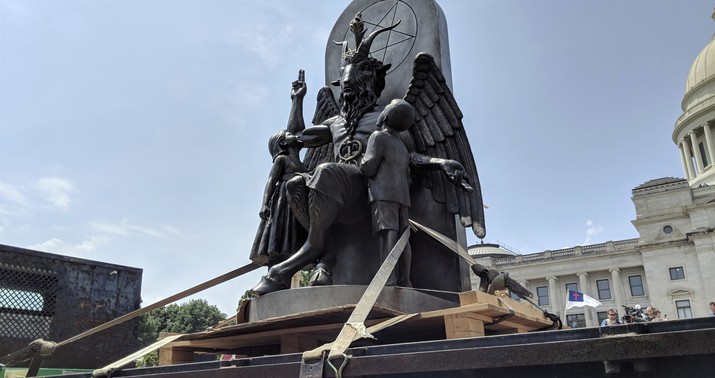 Maybe you’re thinking this is a gag but it doesn’t seem to be. A guest writer at HuffPost says that in the wake of Justice Ginsburg’s death she’s decided to join the Satanic Temple to protect abortion rights:

I am a 40-something attorney and mother who lives in a quiet neighborhood with a yard and a garage full of scooters and soccer balls. I often walk with my children to get ice cream and spend weekends hiking through a national park. I am not the type of person who would normally consider becoming a Satanist, but these are not normal times…

When Justice Ginsburg died, I knew immediately that action was needed on a scale we have not seen before. Our democracy has become so fragile that the loss of one of the last guardians of common sense and decency in government less than two months before a pivotal election has put our civil and reproductive rights in danger like never before. And, so, I have turned to Satanism.

As the author goes on to explain, the Satanism she’s joining is essentially a group of litigious atheists, not people sacrificing goats:

The basic argument here is that with Ginsburg gone and Trump likely to replace her with a far more conservative judge, such Amy Coney Barrett, Roe v. Wade could be on its last legs. So she wants to support a group that is going to more aggressively use the law to undermine that outcome. The author highlights a Rolling Stone article last month about the Satanic Temple’s efforts to argue abortion restrictions can by bypassed under the Hobby Lobby exemption. Essentially, the Temple is arguing that abortion is a sacred ritual, but so far their track record with their argument isn’t very impressive:

The Satanic Temple has made these claims in multiple state and federal court cases on behalf of members who were pregnant and sought an abortion at the time the lawsuits were filed. So far, it has been unsuccessful. It lost in 2019 before the Missouri Supreme Court, which ruled that the challenged Missouri abortion law does not require any patient to actually have an ultrasound (though one must be offered) or read the state pamphlet (though it must be provided). In June this year, the federal appeals court that covers Missouri ruled that the Satanists cannot be exempt from generally applicable and neutral state laws just because their religious beliefs disagree with the law.

The Satanic Temple, who may wind up appealing this to the Supreme Court, isn’t backing down, and it issued a press release earlier this month again claiming that it is exempt from state abortion restrictions. The church is clearly reading the tea leaves about how the Supreme Court is treating religious liberty. It’s also counting on the Court ultimately being evenhanded with its religious liberty jurisprudence — if it benefits the country’s dominant religion, it should benefit all religions. There’s reason to doubt whether the Court will apply these principles neutrally, but if it does, The Satanic Temple may eventually win.

To be clear, the win the Temple is seeking isn’t really to exempt its members from abortion laws so much as to prompt the Supreme Court to reconsider the religious exemption itself. This is the same approach the group used to fight a 10 commandments display in Arkansas. The group claimed it had a right to put a statue of a Satanic figure on state grounds in the hopes that authorities would remove the 10 commandments display to prevent that from happening.

What the group is doing is somewhat similar to what conservative speakers have been doing for the past few years by showing up at places like Berkeley to hold speeches. It’s a test of free speech in a real world environment. But obviously no one dies at a Ben Shapiro speech on a college campus (though activists often suggest they will). Abortion is fundamentally different which is why people oppose it in the first place. Countries around the world, including those that are far more secular than ours, limit when and where abortions can take place.

I wonder if pushing this could backfire on the left. There’s already an argument out there that woke politics operates exactly like a religion, albeit one without a belief in any genuine divine being (just like the Satanic Temple). Should people be able to declare themselves exempt from laws instituted based on woke politics as well as abortion restrictions?

Finally, if you thought I was exaggerating about the Temple claiming abortion is a ritual, well, here they are making that argument. This is creepy but again these folks are aren’t Satanists, they’re atheists using this imagery to troll people.