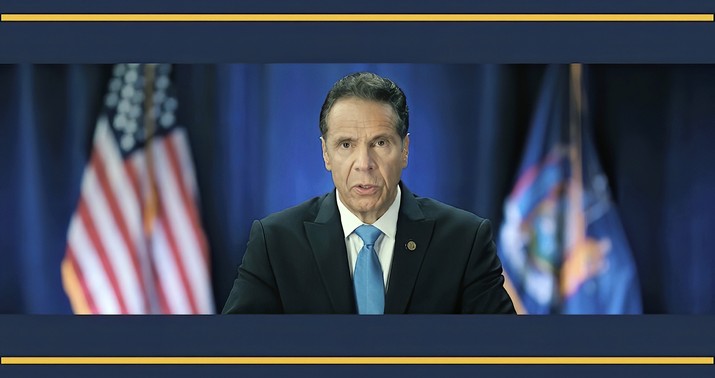 It’s incredible this guy is still seen as a coronavirus hero by the left. Here’s the governor of New York giving the media a soundbite to use against President Trump despite the fact that this version of history is spectacularly misleading in a number of ways. Watch the clip and we’ll go over these claims below:

Did Trump cause the COVID outbreak in New York as Cuomo claims by refusing to close the border to Europeans soon enough? I guess that’s one argument you can make but it sure leaves out a lot of relevant detail. Note that Cuomo says people with COVID were coming into the state from Europe in January, February and until mid-March when a travel ban from Europe was put in place. Would Cuomo himself have done better? That’s the implication, right?

Actually we know when the first diagnosed case of the virus hit New York from overseas. That case didn’t arrive from Europe and when it did arrive, Gov. Cuomo was still confident that the state was in no danger from the virus:

A 39-year-old woman took Flight 701 from Doha, Qatar, to John F. Kennedy International Airport in late February, the final leg of her trip home to New York City from Iran.

A week later, on March 1, she tested positive for the coronavirus, the first confirmed case in New York City of an outbreak that had already devastated China and parts of Europe. The next day, Gov. Andrew M. Cuomo, appearing with Mayor Bill de Blasio at a news conference, promised that health investigators would track down every person on the woman’s flight. But no one did…

For many days after the first positive test, as the coronavirus silently spread throughout the New York region, Mr. Cuomo, Mr. de Blasio and their top aides projected an unswerving confidence that the outbreak would be readily contained…

“Excuse our arrogance as New Yorkers — I speak for the mayor also on this one — we think we have the best health care system on the planet right here in New York,” Mr. Cuomo said on March 2. “So, when you’re saying, what happened in other countries versus what happened here, we don’t even think it’s going to be as bad as it was in other countries.”

Furthermore, in mid-March when Trump instituted the travel ban which Cuomo considers too little, too late, New York had yet to shut down a single county or institute any kind of stay at home order. A former CDC director told the NY Times that if Cuomo (and de Blasio) had acted sooner the number of deaths might have been cut in half:

Dr. Frieden said that if the state and city had adopted widespread social-distancing measures a week or two earlier, including closing schools, stores and restaurants, then the estimated death toll from the outbreak might have been reduced by 50 to 80 percent.

Cuomo did get around to shutting down the state but not until March 22, more than a week after Trump’s European travel ban. Even Vox agrees Gov. Cuomo was slow to act:

According to experts, Cuomo and other New York leaders were initially slow to react to the coronavirus, letting the pathogen spread rapidly through the population before the state closed down. Some of that was due to a lack of understanding of the disease early on, but there were also steps Cuomo and others, experts argued, should have known to take even back then…

“It did take us a while to focus on the strategies that we really needed to implement, given the threats that we faced in New York,” Denis Nash, an epidemiologist at the City University of New York, told me. “It’s hard to expect our elected officials to get everything right from the beginning in such an unprecedented situation. But I still think that some of our elected officials in New York — I’m thinking of Gov. Cuomo and Mayor de Blasio — really waited a little bit too long to make some hard decisions.”

Cuomo was vocally skeptical of a stay-at-home order. Asked about de Blasio’s comments advocating for a “shelter-in-place” order, Cuomo on March 19 suggested such a move was unnecessary, arguing, “I’m as afraid of the fear and the panic as I am of the virus, and I think that the fear is more contagious than the virus right now.” Behind the scenes, the mayor and governor reportedly bickered about the order, with Cuomo remaining resistant.

Again, I’m not suggesting that a global travel ban in January wouldn’t have helped, but it would have been untenable at the time to tell American citizens they couldn’t return from Europe when there were no known cases of the disease in the U.S. If you want to discuss things which might have helped slow the virus, a statewide shutdown of New York on March 1st would have been pretty effective too. But as you can see, Cuomo was still skeptical about that even after the travel ban was in place.

And all of that is not to mention the order Cuomo put in place requiring care homes to receive COVID patients. Even if you believe it was entirely Trump’s fault for not keeping COVID out of New York, once it was here, it was Gov. Cuomo’s job to keep it out of nursing homes where we already knew from events in Europe the most vulnerable patients were to be found. Instead, his order actually sent patients with the disease to nursing homes.

You may recall that New York had a special approach to reporting the number of nursing home deaths that was different from most other states. It only counted as a COVID death in nursing homes if the person died on the premises. So if an ambulance was called and took them to a hospital and they died off-site a few hours later, that didn’t count.

Riverdale Nursing Home in the Bronx appears, on paper, to have escaped the worst of the coronavirus pandemic, with an official state count of just four deaths in its 146-bed facility.

The truth, according to the home, is far worse: 21 dead, most transported to hospitals before they succumbed.

“It was a cascading effect,” administrator Emil Fuzayov recalled. “One after the other.”

Cuomo has actually bragged about these artificially low numbers:

“Look at the basic facts where New York is versus other states,” Cuomo said during a briefing Monday. “You look at where New York is as a percentage of nursing home deaths, it’s all the way at the bottom of the list.”

In another briefing last month, he touted New York’s percentage ranking as 35th in the nation. “Go talk to 34 other states first. Go talk to the Republican states now — Florida, Texas, Arizona — ask them what is happening in nursing homes. It’s all politics.”

Cuomo is right about one thing. This is purely about politics. He’s trying to hand the Biden campaign and the media a soundbite they can use to go after the president a few weeks before the election. No doubt the goons at the Lincoln Project will be happy to turn this into another commercial, but it’s a spectacularly misleading claim. Blaming the spectacular failure in New York entirely on the president is just partisan nonsense. But don’t hold your breath waiting for a fact-check.

Meltdown City: Dems Threaten to ‘Burn It Down’ After RBG News, One Drinks on Live TV After McConnell Statement