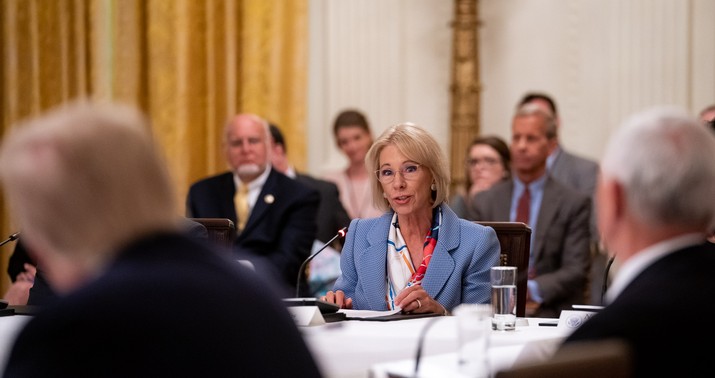 This has been a long time coming. Education Sec. Betsy DeVos announced plans to reconsider Obama-era Title IX guidance to college administrators on dealing with incidents of sexual assault back in 2017. The proposed revision to the rules appeared in 2018. This week two different courts refused last minute efforts to block the new rules so they will take effect on Friday. The Trump administration’s first win in court came over the weekend:

In a Sunday order, U.S. District Judge John G. Koeltl refused to grant a preliminary injunction, which would have halted the rule’s implementation while he heard arguments in the case, brought by school boards for the state of New York and New York City against DeVos and the U.S. Department of Education.

Today’s ruling on our #TitleIX rule out of the Southern District of New York is a true victory for students. So pleased to see the court agrees that civil rights cannot wait. pic.twitter.com/OA20arj4Hy

However, there was still one case remaining which could have potentially blocked the new rule. That final hurdle was cleared today when a court in Washington, DC refused an effort by 17 states to strike down the rule:

A circuit court judge in the District of Columbia released an order Wednesday denying a request to stop the new rule and to block it as legal action continues. Attorneys general in 17 states and the District of Columbia have brought the lawsuit challenging DeVos’ policy change, which mandates how colleges and K-12 schools must respond to reports of sexual misconduct…

District of Columbia Circuit Court Judge Carl John Nichols wrote that, while state leaders have raised “serious arguments” about the rule, “they have not established a likelihood of success on their claims, nor have they established that they are likely to suffer substantial irreparable harm pending further litigation.”

The new rule makes several changes to the Obama-era guidance which are intended to create a more level playing field for the accused. For instance, the new rule gives the accused the right to cross examine the accuser in some form, i.e. through an attorney or in writing. This step was frequently absent from many campus kangaroo courts which used a single investigator and often gave the accused no chance to question the accuser’s story.

The new rule also allows campuses to choose a higher standard of guilt when making decisions. Instead of a “preponderance of evidence” standard (51%) they can now choose to use the more rigorous “clear-and-convincing” standard of proof. Schools aren’t required to use this but as Reason pointed out they are expected to apply the same standard to everyone, meaning cases involving professors too.

There’s a breakdown of some of the other differences here.

While “rape culture” activists uniformly hate the new rule, it will be a big improvement. There are many cases in the last few years where the lack of due process and low standard of guilt used in these cases has resulted in punishment for the accused despite evidence contradicting the accuser’s story. One of the best takedown’s of the Obama-era guidance was this one at the Atlantic by Emily Yoffe. That’s just part one but the other two sections are linked near the top. Here’s my discussion of part 3 which deals with the racial aspect of these allegations.