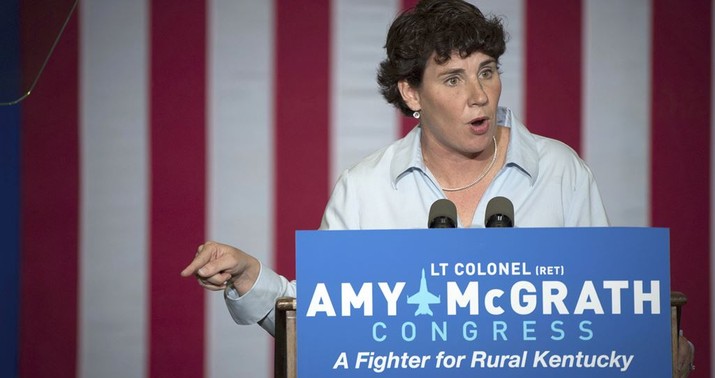 Last Tuesday Rep. Alexandria Ocasio-Cortez won her reelection primary in a blowout. But that wasn’t the only primary contest in which a moderate was facing off against a progressive. In Kentucky, former fighter pilot Amy McGrath was the establishment standard-bearer but she faced a serious challenge from progressive Charles Booker. Today, with a couple of Kentucky counites finally releasing their vote totals, the Associated Press has called the race for McGrath:

Booker’s long-shot Senate bid surged amid the national eruption of protests against police brutality. He joined demonstrations in his hometown of Louisville to demand justice for Breonna Taylor, who was fatally shot by Louisville police in her own home. Booker gained the backing of leading national progressives as he supported a universal basic income and Medicare for All — ideas that McGrath resisted.

McGrath charted a more moderate course inside Democratic politics. She supports adding a public health insurance option as part of the Obama-era Affordable Care Act and supports expanded access to Medicare for people 55 and older.

Booker was basically running in the Bernie Sanders lane and picked up endorsements from national figures on the far left:

Winning the support of local newspapers and out-of-state liberal leaders like Senator Bernie Sanders of Vermont and Representative Alexandria Ocasio-Cortez of New York, Mr. Booker tapped into fury over the killings of Breonna Taylor and David McAtee to jolt what had been a quiet race conducted mostly under the radar until the last month.

There are two ways to look at this. On the one had Booker lost and the endorsements from Sanders and AOC obviously weren’t enough to get him over the line. So this looks like a pretty clear signal that what works in Brooklyn doesn’t necessarily translate in Kentucky. On the other hand, it was a pretty close race. As I write this, the NY Times has only about 15,000 votes separating the candidates. That’s a pretty solid showing for someone who is very progressive in a red state.

But Booker was probably helped by the fact that McGrath really didn’t run her campaign against him:

Most of her spending focused on McConnell, as McGrath essentially ran a general-election campaign against him for months, even after Booker joined the race in January. She focused some of her late advertising more directly to the state’s Democrats, a concession to the rapidly tightening race, and outspent Booker heavily in the final week. Even then, her advertising leaned on many Democrats’ belief that her campaign is best suited to challenge McConnell this fall.

The reason Booker performed well in the closing weeks was the current national moment connected to Black Lives Matter. We’ve seen a lot of dramatic reactions from mayors and city councils around the country, everything from plans to disband the police to the CHAZ. Booker benefited tremendously from that progressive surge and still it wasn’t enough.

So does Amy McGrath have a shot at unseating cocaine Mitch McConnel? The NY Times says it’s an uphill battle:

She will still have ample cash for her race against Mr. McConnell, who is seeking a seventh term, but her uneven performance as a candidate, first in 2018 and again in this primary, has raised doubts about how strong of a campaign she will run in the general election.

Here’s a report of the win from MSNBC. Steve Kornacki makes a good point near the end of this. What we saw in this drawn out contest in Kentucky is probably what we’re going to see around the country this November. Voting day election results can be dramatically different from mail-in-votes and that can create early results that are misleading. In this case, a 50 point lead for Booker in one county was whittled down to 6 points after mail-in ballots were counted.

Probably not for everyone, no