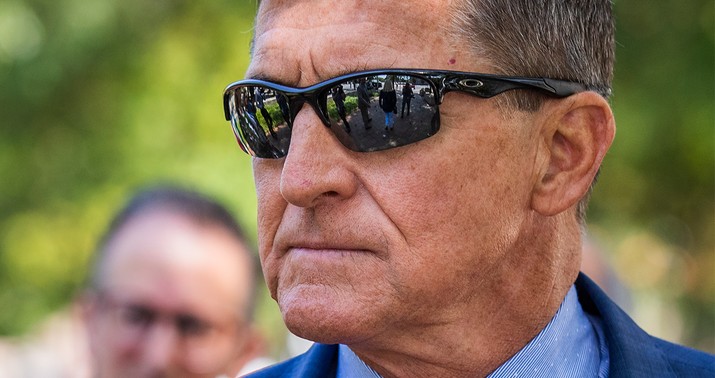 With everything else going on right now, the ongoing battle over Michael Flynn’s case has been relegated to the background. However, there were some developments yesterday. Judge Emmett Sullivan’s attorney asked the Appeals Court to give him time to reach his own decision about dismissing the case:

Beth Wilkinson, a former Justice Department lawyer appointed to represent Judge Sullivan, said the appeals court should give the judge a chance to rule first.

“If Judge Sullivan’s decision is anything short of what the parties sought, this court will have a chance to review it, without writing on a blank slate,” she said. “There is no reason for this court to enter the fray now.”

After pleading guilty twice, Flynn reversed course and said he didn’t lie to the FBI about his conversations with Russia’s ambassador to the US. But Wilkinson asked, what about Flynn’s separate false statements in which he denied that he did lobbying work for Turkey? They were part of his plea agreement.

And she said the judge wanted to examine the fact that the career prosecutors who worked on the Flynn case did not sign off on the motion to drop the charges, a fact that she called unusual.

The full document filed on behalf of Judge Sullivan is here. Meanwhile, the DOJ filed new documents with the same court asking that they order Judge Sullivan to dismiss the case now.

“Instead of inviting further proceedings, the court should have granted the government’s motion to dismiss,” top DOJ officials, including at least three career prosecutors, wrote in a 45-page filing to a three-judge appeals court panel.

The DOJ lawyers unveiled a muscular argument in favor of virtually unbridled executive branch discretion in criminal charging decisions. They argued that Sullivan had no business standing in the way of a dismissal favored by both the government and a defendant.

The Justice Department’s new filing represented a major coup for Flynn’s defense. Indeed, in one respect the government went even further than the retired general’s attorneys did: It essentially asked the appeals court to foreclose Sullivan or any other judge from launching contempt proceedings against Flynn over seemingly contradictory statements he made under oath when affirming his plea and later withdrawing it.

“Nor, under the circumstances of this case, may the district court assume the role of prosecutor and initiate criminal charges of its own,” the Justice Department added, declaring unambiguously that Sullivan has “no authority” to move forward with a contempt proceeding, as he suggested he might.

It’s not clear when the appeals court panel will decide how to respond to the conflicting claims. They have a choice between letting judge Sullivan reach a decision in his own time knowing that decision can be appealed to them later. Or they can simply agree with the DOJ that Sullivan is out of his depth already and order him to dismiss the case now.

I have no clue of how the Court of Appeals will rule but when they initially gave Judge Sullivan 10-days to explain himself, the sense of the order was that they thought he was doing something out of the ordinary and needed to explain himself. It wasn’t a friendly request it was an order. We’ll have to wait and see if Sullivan’s attorney has changed their mind.

However this turns out, this is only a 3-judge panel from the DC Court of Appeals. So if either side is unhappy with the decision, they can appeal it to the full court. Whichever way this goes, it could drag on for several more weeks unless one side or the other blinks.