NY Times: Now is the time to feel the Bern and embrace ‘activist government’ 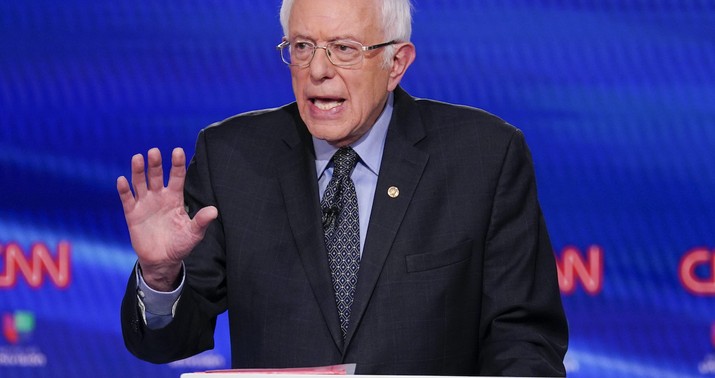 Today the NY Times editorial board launched the first part of a two-month project titled “The America We Need.” Since this is only the opening chapter in that effort, it’s not possible to spell out all of the details at this point, but the tone is clear enough.

It’s a coincidence that this is being launched one day after Bernie Sanders announced he was dropping out of the race but that coincidence highlights the impression the NY Times’ editorial board is picking up where he left off. Which candidate does this sound like?

The coronavirus pandemic has necessitated extraordinary sacrifices, but the distribution is profoundly unequal.

The wealthy and famous and politically powerful have laid first claim to the available lifeboats…the billionaire David Geffen posted on Instagram that he planned to ride out the crisis on his 454-foot yacht, Rising Sun, adding, “I’m hoping everybody is staying safe”

What is needed, according to the Times, is less reliance on markets and more on “a just and activist government.”

A major reason for the faltering response is a chimerical expectation that markets will perform the work of government. The White House has for the most part refused to mandate or coordinate production of critical medical supplies. Indeed, the federal government has bid against states for available supplies and encouraged states to bid against one another. It is an embrace of markets so extreme it might seem farcical if it wasn’t resulting in unnecessary deaths.

Corporate action and philanthropy certainly have their places, particularly in the short term, given President Trump’s feckless leadership and the tattered condition of the government he heads. But they are poor substitutes for effective stewardship by public institutions. What America needs is a just and activist government. The nature of democracy is that we are together responsible for saving ourselves…

The multi-trillion-dollar scale of the government’s response to the crisis, for all its flaws and inadequacies, offers a powerful reminder that there is no replacement for an activist state.

The top paragraph is referring to the Defense Production Act, a 1950s act which allows the president to compel companies to produce needed materials (under contract). Trump has used the act on several occasions (3M and GM) but has hesitated to use this power more broadly. By contrast, Gov. Cuomo has said, “Yes, it is an assertion of government power on private sector companies. But so what. This is a national emergency.”

Two points about this. First, the media has been fond of quoting Gov. Cuomo’s frustration with the president’s reluctance to use the DPA. The same media has rarely mentioned that the very same week, after talking to Trump, Cuomo softened his stance and said, “The president and his team, I think, are using the DPA well.”

Secondly, this editorial seeks to lay all the blame for the “faltering response” on Trump at the federal level. However, as the Times pointed out yesterday, that’s not where all the blame belongs. A lot of it belongs with failures at the state level. Certainly that’s the case in New York, where the worst outbreak in the nations is currently located.

But beyond these footnotes, it’s one thing to suggest federal control of production may be necessary in a crisis. It’s quite another to argue this should be a model for the future. Even Gov. Cuomo’s statement about the DPA assumes this is for national emergencies only. I think the Times will find the idea that corporations need constant guidance from government a tough sell outside the socialist far left.

Eventually the Times’ editorial board makes clear that the kind of activist government they envision:

To give Americans a fair chance in the race of life, the government must begin from birth. The United States must reclaim the core truth of the Supreme Court’s seminal decision in Brown v. Board of Education: So long as Americans are segregated, their opportunities can never be equal. One of the most important steps the United States can take to ensure all children have the opportunity to thrive is to bulldoze enduring patterns of racial and economic segregation. Zoning laws that limit residential development in the very areas where good jobs are most abundant are one of the most important structural obstacles to a more integrated nation.

And the nation’s tattered social safety net is in desperate need of reinforcement. Americans need reliable access to health care. Americans need affordable options for child care and for the care of older members of their families, a growing crisis in an aging nation. No one, and especially not children, should ever go hungry. Everyone deserves a place to call home.

Bernie lost the race to be his party’s nominee because his proposals were judged to be too far left (and too expensive), but the NY Times’ editorial board doesn’t have to answer to voters and has decided to take up Bernie’s platform. The Times’ editorial board is going to keep pushing forward a vision of America the voters have already rejected.