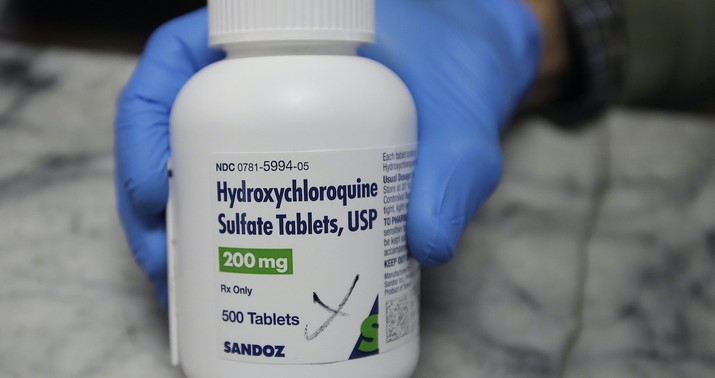 The story of this drug has involved a mixture of small studies and anecdotes which is really all we have while we await the results of larger trials. Yesterday, a small French study of the drug, which showed extremely positive results, was retracted. On the other hand, Monday of this week, a doctor in Los Angeles claimed he was seeing remarkable results after treating patients with a combination of hydroxychloroquine and zinc:

Dr. Anthony Cardillo said he has seen very promising results when prescribing hydroxychloroquine in combination with zinc for the most severely-ill COVID-19 patients.

“Every patient I’ve prescribed it to has been very, very ill and within 8 to 12 hours, they were basically symptom-free,” Cardillo told Eyewitness News. “So clinically I am seeing a resolution.”…

He said he has found it only works if combined with zinc. The drug, he said, opens a channel for the zinc to enter the cell and block virus replication.

But the anecdotal pendulum swings both ways and today NBC News reports on several doctors from New York to Washington state who are using the drug on very ill patients but who say they haven’t seen evidence it’s working:

“We’ve been using it,” said Dr. Hugh Cassiere, a pulmonologist and medical director of Respiratory Care Services at North Shore University Hospital in Long Island, New York, a hot spot for the pandemic in the United States. “But we really haven’t seen any efficacy.”

“I’m not convinced it works,” said [pulmonologist Dr. Ken] Lyn-Kew, adding, “I’ve not seen anybody have anything near what I would call a miraculous recovery because of hydroxychloroquine.”

In Louisiana, Dr. Josh Denson, a pulmonary medicine and critical care physician at the Tulane University Medical Center in New Orleans, said that “many patients do fine and tolerate it, but I don’t think it’s making a difference.”…

“I can’t honestly say that I think that it’s necessarily an effective agent at this point,” said [infections disease specialist Dr. George] Diaz, of the Providence Regional Medical Center in Washington state. Diaz was involved in the treatment of the first patient in the U.S. diagnosed with the coronavirus.

Despite the lack of clear information, a significant number of doctors around the world have been using the drug on patients. An international survey of 6,000 doctors found that hydroxychloroquine was judged the most effective treatment from a list of 15 options. The fact that many doctors believe it’s effective presumably means they have seen something that makes them believe that.

However, there are a couple of caveats to this. The first is that apparently only about a third of the doctors in the overall survey (2,171) responded to this question. Secondly, the percentage who feel the drug is effective varies widely between regions. For instance in Italy and Spain 62% of doctors who had prescribed this or seen it used said it was the most effective treatment, but in the U.S. that figure was just 23 percent. That’s a huge difference. If this works, why don’t more American doctors see it?

The Morning Briefing: MSM Really Earning 'Enemy of the People' Status During Riots

In NYC, the riots have shown that the lockdown is over

Throw in the lockdown towel

Non-sequitur? Floyd autopsy shows evidence of drug use, but …

“…Sullivan has “no authority” to move forward with a contempt proceeding, as he suggested he might.”

Julian Assange is allegedly too ill to extradite

Biden: Police reform is “long overdue” and shouldn’t wait for my presidency

“No more excuses, no more delays.”