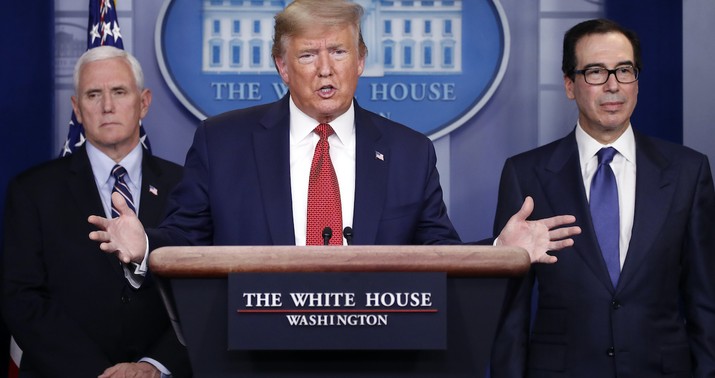 Left-wing journalists have suddenly realized the real downside of the coronavirus crisis. No, it’s not that thousands of people will likely die. It’s that President Trump is getting a lot of TV time. Here’s Vox explaining the problem:

For as much as Trump evidently wants to force the country back open for business, no matter how inadvisable that plan may be, he’s getting exactly what he wants as the crisis drags on. He’s on TV all the time. He’s got a captive audience. He can say whatever he wants and the news networks will cover it.

And with the shutdown of almost all TV and film production in the face of the coronavirus threat, as well as the cessation of live sports, it’s not difficult to imagine a world where Trump is just on TV all the time and there’s not much we can do to shut him off.

Eventually, near the end of the story, Vox admits what the real concern is:

There’s been some concern among those who pay close attention to presidential approval ratings that despite Trump’s bungling of America’s response to the coronavirus from the first, his numbers continue to tick up a little bit with every new poll. The worst days of the virus’s sweep through the US are almost certainly still ahead of us, as the number of infections and deaths continues to rise, so there’s no guarantee those approval ratings will hold. But I would argue that as Trump continues putting himself in front of TV cameras to act like he’s taking charge and driving this narrative forward, he might still benefit. Even if things are falling apart, he’s still “taking charge,” whatever that means.

Today the NY Times has a piece which opens with the high ratings the briefings are getting and then asks whether the media should be airing them at all:

Since reviving the daily White House briefing — a practice abandoned last year by an administration that bristles at outside scrutiny — Mr. Trump and his coronavirus updates have attracted an average audience of 8.5 million on cable news, roughly the viewership of the season finale of “The Bachelor.”…

“I would stop putting those briefings on live TV — not out of spite, but because it’s misinformation,” the MSNBC host Rachel Maddow declared to her viewers last week.

Yes, I’m sure that noted non-partisan Rachel Maddow has no other reason for wanting the briefings to be pulled off the air. This is the equivalent of citing Sean Hannity for why Nancy Pelosi shouldn’t be allowed to appear on television.

All of this has been bubbling up through the left-media for at least a week. Last Saturday, Margaret Sullivan wrote a media column titled simply “The media must stop live-broadcasting Trump’s dangerous, destructive coronavirus briefings.”

Radical change is necessary: The cable networks and other news organizations that are taking the president’s briefings as live feeds should stop doing so…

Jay Rosen, a journalism professor at New York University…wrote on his PressThink blog that the media needs to switch into “emergency mode”for covering Trump and clearly communicate that change to its readers and viewers.

“We are not obliged to assist him in misinforming the American public about the spread of the virus, and what is actually being done by his government,” Rosen wrote.

Today, Vanity Fair’s Gabriel Sherman upped it a notch claiming Trump was “literally” turning the cable networks into state TV. Ironically, he’s saying this to convince networks to do something actual State TV could never do: Choose not to air the broadcasts.

Trump is literally turning all 3 cable news networks into State TV. Live daily campaign rallies for the president to strengthen his hold on power. Unprecedented departure from American norms.

And of course, CNN’s Brian Stelter is sounding the same alarm:

Over the last two weeks, Trump has turned "the all-but-abandoned briefing room into the set of a largely unscripted television series that has gripped, worried and (depending on one’s political affiliation) infuriated viewers," @michaelkruse writes https://t.co/2psj5zQU8f

And as of today it appears all of this shrieking has worked as intended. Networks are now saying they will not air the press briefings.

NBC and CNN producers say they're through airing Trump's virus pressers. “We might take it from the top and then cut away after the first lie, and return when the lies stop.” https://t.co/kNhwJGhVe3

Trump’s greatest strength, over and over, is the overreach of his opponents. There is plenty of material to criticize in these daily briefings if that’s what you’re looking to do. The left-leaning media should not be hard-up for material at this point. But Trump is still the president and these briefings do include a lot of good information, especially from Dr. Birx and Dr. Fauci. So please, just stop pretending this is about ethics and admit this is about politics. It’s really not a coincidence that all of this is happening as Trump’s polling seems to be rising in an election year.

I find it very strange that there a mass upswing of journos and cable news people screaming about how you can't televise Trump's COVID-19 briefings just as his poll numbers are seeing a surge. It's such a curious coincidence.

“You tell yourself that you didn’t know for sure and you never really saw anything, but that’s all just rationalization.”

Meghan McCain: I’ve supported reopening, but I’m disheartened by these scenes of mass gatherings with no precautions

“I think I’m just confused at the insensitivity.”

“The State has not identified any additional interests allegedly served by the pay-to-vote system.”

“Are you better off than you were four months ago?”

They defeated a superpower!

No boat ride for you, buddy.

“…they don’t even see differences between individuals as having any role to play in success.”