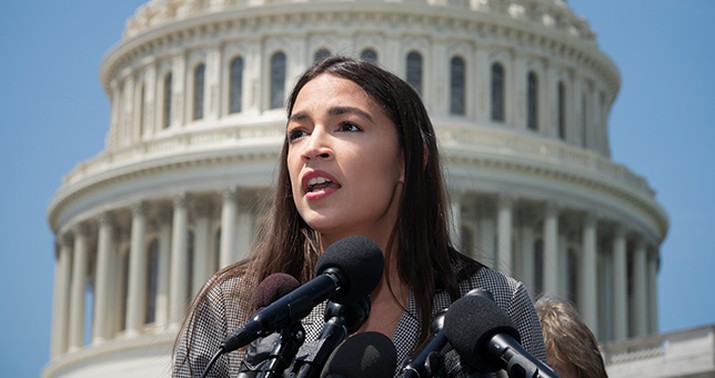 Today, AOC announced her Courage to Change PAC would be endorsing and supporting a slate of progressives, some of whom are challenging more moderate Democrats:

Today @CouragetoChange is announcing its first endorsements of newcomers to Congress:

NBC has the details on the candidates who are attempting to defeat Democrats:

Eastman is challenging Democratic Rep. Don Bacon in Nebraska and Newman is trying to defeat Democratic Rep. Dan Lipinski in Illinois’ primary. On Newman’s campaign website, she slams Lipiniski for voting against Obamacare and coverage for pre-existing conditions. Cisneros is trying to primary Democratic Rep. Henry Cueller in Texas and said on her website that Cueller is “Trump’s favorite Democrat.”

This is just the first slate of candidates AOC intends to support. The NY Times calls it an attempt to reshape the Democratic Party:

The endorsements of the congressional candidates — including one who is challenging Senate Democrats’ preferred candidate in Texas — amount to a powerful stamp of approval for a diverse group of newcomers. They also are a clear sign that Ms. Ocasio-Cortez, a celebrity of the liberal left, intends to leverage her influence among activists to try to reshape the Democratic Party.

The move also underlines the struggle among Democrats that is defining the race for the presidency, which is pitting Senator Bernie Sanders, the self-described democratic socialist, against more moderate candidates who are presenting themselves as better able to appeal to a broad section of voters in taking on President Trump. Ms. Ocasio-Cortez has traversed the country to campaign for Mr. Sanders, and her efforts to pull Congress to the left parallel his bid to deploy his progressive message to emerge as the Democratic nominee, an effort that has instilled fear in many centrist lawmakers who believe it could cost them their seats.

Well, you can’t say that she lacks conviction. I actually think this could be a good thing in the long run…for Republicans. The Democratic Party is an increasingly uneasy bargain between relative moderates like Joe Biden and far left figures like Sanders and AOC. What AOC wants to do is drag the party left by electing more socialists. She may succeed in a few places but I suspect she also going to turn off moderate voters and make it more difficult for the party to elect moderates.

The important point is that it was moderates who gave Democrats control of the House. Driving those people out or forcing them to move left is going to open up opportunities for Republicans to take back some of those seats.

Ms. Ocasio-Cortez said she saw her role as breaking down the barriers to entry for the kinds of Democrats who should be serving.

“It’s important for us to create mechanisms of support because so much of what is happening in Washington is driven by fear of loss,” she said in the interview. “We can really create an ecosystem that makes people more comfortable into making the leap to make politically courageous choices.”

The thing about fear of loss is that, sometimes it may limit your options but it also helps protects you from getting way out over your skis. I don’t think AOC appreciates that yet. She’s imagining all of these new candidates are going to be swept into office on Bernie’s socialist coattails. And if that happens, she’ll be even more powerful than she is now.

But there are lots of experienced Democrats out there (Hillary Clinton and James Carville come to mind) saying what’s more likely to happen is that Bernie is going to be seen as too extreme by swing voters and will not only lose but could create problems for down ballot Democrats. (Hillary actually suggested that things could be equally bad if Sanders somehow wins because he won’t be able to deliver on any of his promises.)

To be fair, Sanders and his campaign are well aware of this potential problem. Their bet has always been that a new wave of far left voters will show up at the polls to make up for the moderates that tune out. It’s a theory but it’s one that hasn’t been proven yet. And that makes AOC’s decision to double down on it pretty risky.

What I think looks likely at this moment is that Sanders wins the nomination and then loses the race in a Corbyn-style blowout that costs Democrats seats in the House. If that happens, I think a lot of Democrats are going to have not nice things to say to Rep. Ocasio-Cortez for driving the party over the cliff.