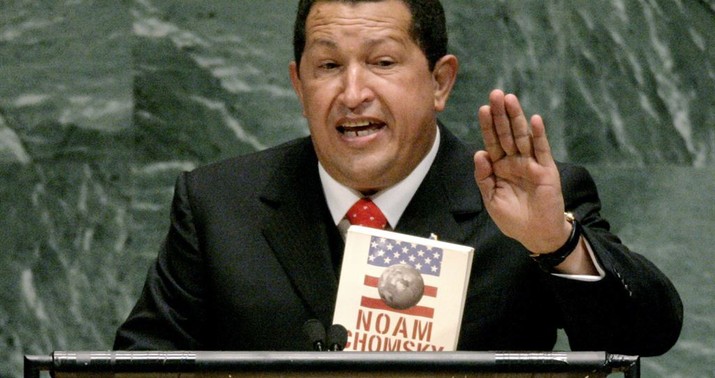 Democrats have a serious problem. Nearly a third of Latino voters support Trump despite his support for a tough stance on illegal immigration. Priorities USA, the largest Democratic super PAC, has a plan to try to limit Latino support for Trump. The Miami Herald reports the group has launched a new ad aimed at making the case Trump acts like a “caudillo” and comparing him to socialist dictators Hugo Chavez and Fidel Castro.

The largest Democratic Super PAC in the U.S. is launching a new series of attack ads starring a group of Florida Latinos who’ve fled oppressive governments in their home countries, featuring footage of President Donald Trump alongside images of Fidel Castro, Nicolás Maduro and Augusto Pinochet…

The digital commercials will begin to publish on social media platforms on Monday with the hashtag “#CaudilloDay,” a nod to the Presidents’ Day holiday.

“What is a caudillo? An authoritarian. A demagogue. A dictator,” the campaign’s introduction ad says in bold white letters on a black backdrop while suspenseful music plays in the background. “Donald Trump does not act like a president. He acts like a caudillo. (It’s not a compliment).”

Donald Trump vilifies the press. He threatens his opponents. He says he wants to run for a third term. That sounds more like an authoritarian dictator than a U.S. president. So today, we must ask ourselves: Is it #PresidentsDay or #CaudilloDay? pic.twitter.com/iX59KNFQj3

Many Democrats seem eager to nominate a Democratic Socialist as their candidate for president, but the pitch to Latinos is that Trump is too much like Chavez and Castro. That seems counter-intuitive to say the least. There is only one person in the presidential race who has praised the Castro regime and his name is Bernie Sanders.

🚨Uncovered video🚨@BernieSanders in 1985 praising the Communist Castro regime in Cuba and admitting on camera that he traveled to Nicaragua to advise the Ortega regime on how to successfully fight the United States. pic.twitter.com/qYtpvbVvCS

But if all of this seems a bit desperate, it’s not hard to understand why it is happening. A former spokesman for the Congressional Hispanic Caucus says Democrats should be very worried about Trump’s consistent support from about a third of Latino voters.

President Donald Trump has done almost everything he can to anger Latino voters. And yet, his support among this crucial portion of the electorate remains surprisingly consistent. After the 2016 election, exit polls analyzed by the Pew Research Center showed that 28 percent of Latino voters supported Trump; today, 30 percent support him…

Democrats lost the 2016 election with about 66 percent of the Latino vote. Today 65 percent of registered Latino voters who are Democrats have a positive view of the party’s presidential candidates. Based on exit polling from the past three election cycles, I estimate that Democrats need about 70 percent of this vote to take back the White House…

In an election that will likely come down to the smallest margins of victory, the consistent support for Trump from a small, but vocal, subset of Latino voters is a real threat to Democrats. If unchanged, this dynamic could have devastating repercussions for Latinos, and for the country as a whole.

As for why Trump has a solid hold on these voters, the author raises a couple of points. First, America has a strong economy under Trump, which is why most Latinos came here in the first place. Second, the author alludes to strong support from Latinos who fled communist states such as Cuba:

Being able to provide for one’s family is one of the main reasons many people—from any country—immigrate to the United States, so the fact that Trump’s rhetoric on a growing economy has found an audience is not surprising. In Florida, for example, a poll by Equis Research showed that 57 percent of Latinos supported the way the president handled the economy. If you look at only Cuban voters from the state, that number jumps to 71 percent.

Suggesting billionaire capitalist Trump is the person who will put us on a path to a socialist dictatorship like the ones in Cuba and Venezuela doesn’t make much sense. In fact, you have to wonder if this ad is being put out there by moderates in the party as a kind of desperate cry to avoid nominating Bernie Sanders. Sure, the ad is attacking Trump, but it’s also implicitly attacking socialism after all. It’s going to backfire if the party picks Sanders because he clearly has a lot more in common with Castro and Chavez than Donald Trump does.