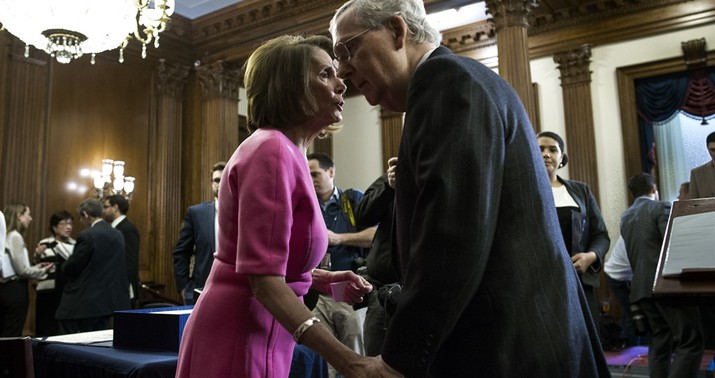 After weeks of delay, Nancy Pelosi is planning to finally send the articles of impeachment to the Senate tomorrow.

The House upheld its duty to #DefendOurDemocracy by passing two articles of impeachment against the President. Tomorrow, we will transmit those articles & name impeachment managers. The Senate must choose between the Constitution & a cover-up. https://t.co/tcPdHeMUGp pic.twitter.com/ebqA3Z1oBi

Pelosi’s strategy on withholding the articles from the Senate was to force McConnell to negotiate but McConnell didn’t have to negotiate and eventually even Senate Democrats began saying this was a losing strategy.

As you can see in statement above, Pelosi is calling the decision to dismiss the charges “a pure political cover-up.” But in a private meeting with Democrats she went beyond this, suggesting that the Senate Majority Leader might be secretly working on behalf of a foreign power:

Pelosi raised concerns to her caucus at the closed-door meeting about the Russian hack into Burisma, the Ukrainian energy company that Trump asked Ukraine to investigate over the hiring of Vice President Joe Biden’s son Hunter. Pelosi said the Gang of Eight was not briefed on the matter and that she learned about it through news reports, according to multiple sources.

The sources also said Pelosi laid into McConnell, saying, as she’s said before, that he is acting like a rogue Senate leader. She mused that sometimes she wonders whether McConnell has Russian connections, the sources said.

Mollie Hemingway referred to this as “worrisome behavior.”

Seriously — is she OK? This is worrisome behavior. And unfortunately, too much of our media enable and contribute to this type of spiraling and delusional thinking. https://t.co/9tWzevAxWq

This does seem pretty out of touch with reality. It’s almost as if Pelosi didn’t get the message from the Mueller report and now she’s ready to spread the collusion smear to new partisan targets. Perhaps she could get the FISA Court to approve some surveillance of McConnell’s associates? All she needs is some salacious rumors from a partisan source and the FBI will probably push it through three or four times. It’s not like the FISA Court was serious about reforming the process.

I realize Russia, Russia, Russia was good for ratings at CNN and MSNBC and for Democrats who made a cottage industry out of media appearances, but it’s time to move on. Yes, Russia is still our adversary and Putin is still up to no good and yes they would like to sow more chaos in the coming election but the Senate Majority Leader is not involved. This casual McCarthyism from Democrats is doing more damage than any Russian Facebook posts ever could. It’s long past time to knock it off.

People Are Zaprudering a Video That Appears to Show Chuck Schumer Gesture to ... an Invisible Person (Watch)