Today’s Twitter dispute: Did the US kill Muammar Gaddafi? 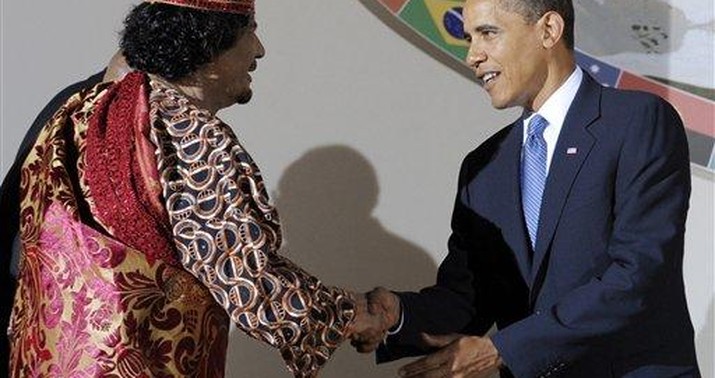 Soleimani was, in fact, planning "imminent attacks." While Democrats and the media quibble over its definition, quick point: When Obama killed bin Laden, al-Awlaki and Gaddafi, without Congressional approval, there were NO "imminent attacks" and Democrats did not ask or care.

But lots of people jumped in with a correction on this point:

Gaddafi wasn’t killed by the US https://t.co/y87kUXOCoi

Hey Hogan, long time no see. Bin Laden and Awlaki were senior, operational Al Qaeda leaders. Congress authorized war against AQ back in 2001. Gaddafi was killed by members of the NTC – not by US forces. But wrt imminence – you have agency here. Release the intelligence. Prove it.

Obama did not kill Gaddafi. What? https://t.co/K9iWIbgmys

Dude, can you do the basic level of homework to know that "Obama" didn't kill Gaddafi? He was caught by a rebel militia and executed, you ridiculous goof.

Is this true? Well, technically yes. Gaddafi’s last moments didn’t come at the hands of Americans. However, his death did follow an airstrike led by a US predator drone being operated from Las Vegas. Here’s a detailed account published in Oct 2011 by the Telegraph:

Gaddafi had been under surveillance by Nato forces for the past week after an intelligence breakthrough allowed them to pinpoint his location.

The Predator drone, flown out of Sicily and controlled via satellite from a base outside Las Vegas, struck the convoy with a number of Hellfire anti-tank missiles. Moments later French jets, most likely Rafales, swept in, targeting the vehicles with 500lb Paveway bombs or highly accurate £600,000 AASM munitions.

Gaddafi survived the attack on the convoy but was captured by rebel forces a few hours later. So to sum up, we invaded Libya, helped track Gaddafi to where he was hiding, isolated him, realized he was making a run for it, and fired missiles at his convoy such that he wound up hiding in a drain pipe. But it was locals who shot him. Some argued that it was disingenuous to pretend the US wasn’t responsible given the events leading to his death:

Gidley argued his critics were missing the point:

…Emails (the ones Hillary didn’t delete) showed her advisers urged her to own it. Obama’s authorization of a bombing campaign and his Administration’s assistance in the overthrow of the Libyan government led to Gaddafi’s death…everyone knows this. We all saw how he died…

…Bottom line: For Democrats, this is not about the power of the Presidency this is about who the President is. Democrats rush to criticize this President – even when he takes out the world’s most dangerous terrorist, simply because the President is @realDonaldTrump.

It’s worth noting that Gidley is correct about then-Secretary of State Hillary Clinton. She was much less careful about Gaddafi’s cause of death during a break between interviews back in 2011: “We came. We saw. He died,” she said, an obvious reference to “Veni, Vidi, Vici,” (I came, I saw, I conquered) attributed to Julius Caesar.

At the time she said this she had just gotten word of Gaddafi’s capture which was still unconfirmed. Still, it’s fair to say she wasn’t averse to the idea the US was responsible.

Update: Twitchy has some more context from 2011.

MT @AnnCurry US officials tell NBC News a US Predator drone fired hellfire missile at convoy carrying Khadafy, who was then captured.

Steve Clemons of The Atlantic on Libya–"I have no doubt someday there will be a Barack Obama Square"/Monument in shape of Predator Drone?

The US drone connection to Gaddafi’s death didn’t seem as obscure then as it does today.

Come ON! Sen. Chris Murphy already has the next article of impeachment all ready to go for House Dems

CDC to Cornell Professor: Those Aren't Our Guidelines, You Know.

ESPN analyst: Get real. There’s not going to be any football this year.

“Next thing you know you got a locker room full of guys that are sick.”