Corbyn’s loss is a warning to Sanders, Warren, and the Squad about the limited appeal of socialism 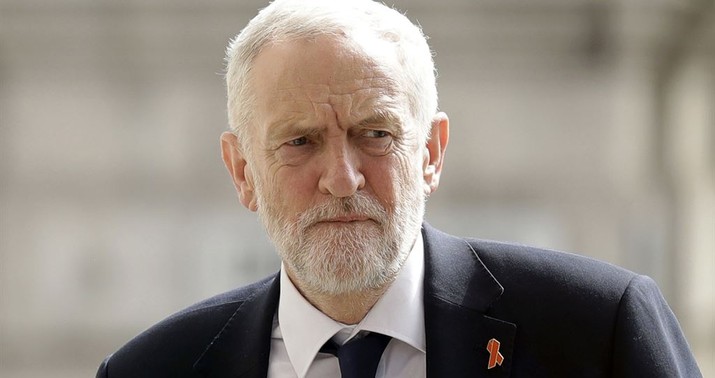 NBC News deserves some credit for publishing this story despite the fact that I’m certain it will make a lot of Bernie Bros angry. Looking at last night’s wipe out of the Labour Party under Jeremy Corbyn, the piece concludes there might be a lesson there for the American left about the limits of socialism’s appeal:

The results in Britain last night were bad news for Bernie Sanders, Elizabeth Warren and America’s left — just 52 days before the Iowa caucuses.

On Thursday, unpopular Prime Minister Boris Johnson and his Conservative Party trounced even more unpopular socialist Jeremy Corbyn and the Labour Party, with Labour having its worst general-election performance in three decades…

Beyond unpopularity and Brexit, last night’s election showed the limits of campaigning and winning on ideology. A socialist or very left-leaning message — inspired to turn out young voters and unite the working class — simply didn’t work.

The fact that Corbyn ran and lost as a Democratic Socialist was pointed out by MSNBC’s Chris Hayes last night on Twitter. After being heckled for a while, Hayes deleted the tweet. His audience clearly didn’t want to hear that Corbyn’s loss might have any bearing on US politics.

Granted there are any number of differences one could point to for why those lessons don’t apply here. The one I saw floated most frequently last night was the centrality of Brexit. But over at New York magazine, Jonathan Chait helpfully points out that people on the left have been pointing to Corbyn as a model for socialist success here in America for years. To demonstrate that this was so, Chait offered a series of excerpts from writers making this point. I’ll offer samples of just two of these here.

The first is from the Washington Post back in 2017: “Corbyn’s success provides a model for U.S. progressives in 2018, 2020 and beyond: If you need turnout to win — as liberals in the United States do — you need a bold, uncompromising platform with real solutions.”

And this second one comes from HuffPost UK: “As ‘Chapo’ put it, Corbyn was ‘proof of concept’ that a candidate offering uncompromising policies, and faced with a hostile media, would not sound the death knell for a political party. Labour now riding high in the polls, and Sanders becoming the most popular politician in the U.S., has only added weight to their argument.”

Surveying this optimism, Chait concludes there has been a lot of wishful thinking going on:

On the whole, the arguments extrapolating from the “success” enjoyed by Corbyn and Sanders suffered from delusional wishful thinking. Proceeding from the erroneous Marxist view that capitalism is growing more oppressive, and a working-class backlash is therefore inevitable, they glommed onto bits of data and ignored and large and growing array of evidence to the contrary.

In the U.K., this delusion created a bitter argument between the left and center-left. The former insisted on maintaining Corbyn as Labour leader, based on the idea not only that he could and would win, but in some cases that his Labour critics opposed him precisely because they feared he would. Their moralistic fervor made any sober political calculation impossible.

If you’ve been paying attention to the ongoing battles between the Clinton/Biden establishment and the enthusiastic Bernie Bros, this dynamic should sound familiar.

As a result of the blowout yesterday, Corbyn will be stepping aside as leader of the party early next year. So will the far left in the UK get the message? This morning, some in the party are warning that if Labour refuses to listen, the party will die:

Ian Murray, a Labour legislator who won re-election in Scotland, said the party’s existence will be threatened if it doesn’t learn from the across-the-board defeats. “This party must listen, this party must respond, or this party will die,” he warned.

He said the party needs not just to replace Corbyn but also to change the world view he brought to the leadership.

Murray is right the the smart thing for Labour to do would be to kick Corbyn to the curb and send the socialist horse he rode in with him. Democrats should do the same here in the US but I think we all know they won’t. Instead, they’ll get louder and meaner, just as they did last night when Chris Hayes raised this point. But anyone who tells you socialism will do better here than it did in the UK yesterday needs professional help.