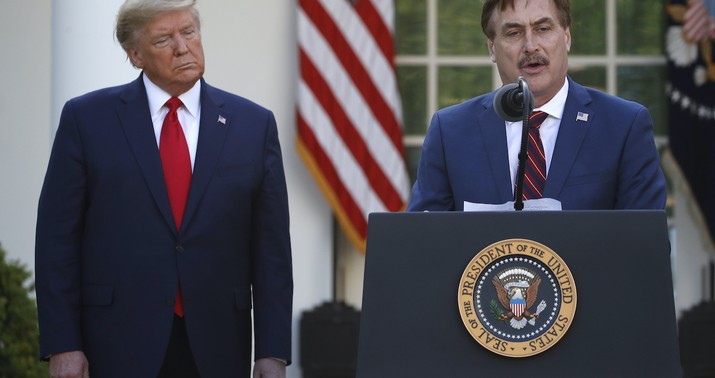 Mike Lindell commented last month that he hoped to get the chance for discovery in a Dominion defamation lawsuit. “I want them to sue me,” the founder and CEO of MyPillow told CBS five weeks ago. Looks like he got his wish, and Dominion Voting Systems apparently looks forward to a little discovery of its own by including Lindell’s company as a respondent:

Dominion Voting Systems sued Mike Lindell, chief executive of Minnesota-based MyPillow Inc., and his company in the U.S. District Court for the District of Columbia, seeking more than $1.3 billion in damages.

In its complaint, the company cites a number of statements made by Mr. Lindell, including in media appearances, social-media posts, and a two-hour film claiming to prove widespread election fraud. Mr. Lindell said he helped produce the film, which he released online in early February.

The complaint alleges that Mr. Lindell made false claims about the integrity of Dominion’s voting machines and that he knew no credible evidence supported his claims that the company had stolen the election from Mr. Trump—what Dominion has called the “Big Lie.”

“He is well aware of the independent audits and paper ballot recounts conclusively disproving the Big Lie,” the complaint states. “But Lindell…sells the lie to this day because the lie sells pillows.”

They don’t mean that figuratively, either. The lawsuit alleges that Lindell has marketed his company’s product directly from his claims of election fraud. Dominion wants to open his books and take a good look at his sales:

Dominion's complaint notes that Lindell's company has offered a number of election-related discount codes, and that he has increased sales of HisPillows by 30-40% by making things up about non-existent election fraud. pic.twitter.com/8uvslR4mTn

There’s a lot in the complaint about past allegations of misleading advertising, plus very specific attempts to tie Lindell and his product to Fox News and Newsmax. Both are respondents in other defamation actions Dominion is already pursuing, which makes this look like an attempt to tie the whole thing to a conspiracy. However, some of this looks like a reach; the lawsuit claims that “MyPillow’s success is due to a gamble Lindell made on Fox News years ago,” and adds that Lindell has bet heavily on Newsmax too. All that claim does is to make Fox and Newsmax look like pretty good bets for advertising. It also overlooks the fact that, whether or not Lindell used questionable marketing, he makes a very good product. (Full disclosure: I own three of his pillows and am very satisfied.)

The attempt to bring in previous complaints about Lindell’s advertising is an attempt to paint a picture of a modus operandi. There is also a bizarre detour through Lindell’s purported career as a card-counter in casinos, although what that has to do with any defamation claim is anyone’s guess:

25. Over the course of three decades, Lindell was a professional card counter with a penchant for solving real-time mathematical equations necessary for beating the odds. While hunkered down at the blackjack table, he would feign a drunken stupor while hundreds of different number combinations ran through his mind like a “computerized algorithm,” enabling Lindell to calculate his bets based on the patterns he observed coming from the dealer’s hand. Lindell “especially loved game theory—the idea that success in making choices depends on understanding the choices of others.”

26. Lindell’s success is due in part to his aptitude for understanding the choices of others—in particular what can motivate others to buy MyPillow products.

27. As a former professional card counter and self-described “numbers guy,” Lindell “look[s] at numbers every single day” at MyPillow.

You know who also looks at numbers every single day? Chief executive officers. This seems to be an attempt to publicly humiliate Lindell, as it has nothing to do with either Lindell’s alleged defamation or his marketing of such.

That’s really just a short aside, however, in a very detailed and potent defamation complaint. Most of the rest of the lawsuit does focus on those allegedly false and defamatory statements and actions, which go on for pages and pages. One has to wonder why Dominion’s attorneys didn’t just focus strictly on those and their use in marketing Lindell’s product. They certainly have plenty of those statements in the complaint; it gets recounted in dozens of paragraphs, interspersed with Dominion’s demands that he stop defaming them or face civil action.

There seems little doubt that Lindell used his stolen-election narrative to market his product, even after being warned to stop. Dominion’s last warning to Lindell apparently got served on February 4th. This is what happened afterward, according to the lawsuit:

102. Later that day, after receiving and reading Dominion’s letter, Lindell appeared for a televised interview on FlashPoint and claimed he was being attacked “because I have all this evidence coming out … When I went on there, the Dominion people had threatened Newsmax. Nobody could go on there and talk about all this evidence that I have or talk about the machines. … Well, everything that’s been attacking me in my whole life right now is because I’ve got this documentary coming out with all the evidence. … They’ve threatened networks … to suppress what actually happened in our country that was attacked from another country. And it’s all coming out tomorrow.”156 Later in the program, the host promoted MyPillow, saying, “We want to put up a promo code. … We want you to go support Mike Lindell. MyPillow.com use promo code ‘FLASH.’ … You want to make sure you go there and support. We’ve got to support patriots, folks. This is where, when I said earlier in the monologue, ‘We have to stand up’ – this is part of standing. I don’t care if you don’t need a pillow. Go order one and give it to somebody else. But we’ve got to support each other because this is the life and death of America….” …

104. The next day, on February 5, 2021, Lindell broadcast the sham “docu-movie” that he had previously advertised on Newsmax and FlashPoint, and for which he was an executive producer. Lindell posted the “docu-movie” to his own website, michaeljlindell.com, and posted directly beneath the embedded video an ad for viewers to purchase his book, Against All Odds, with the “Promo Code PROOF.” The ad linked directly to the MyPillow website, where visitors were met with a “$10 OFF” coupon and could receive 40% off a MyPillow by using the promo code “Proof.”

If Lindell really has “proof,” well, he’d better be organizing it now — or looking for a settlement and a massive retraction. Either he’s got the goods, or Lindell may end up losing everything — and unlike Sidney Powell and Rudy Giuliani, Lindell can’t hide behind a litigator privilege. In blackjack terms, Lindell has spent the last several weeks doubling down on his stolen-election claims, even while most of Dominion’s rebuttal has been in public view for two or more months. Lindell has repeatedly insisted that he will use the discovery process to uncover the “proof” he needs, but he’s about to find out that discovery works in both directions. And as has been noted repeatedly, usually the plaintiff in these lawsuits is the party least concerned about the discovery process.