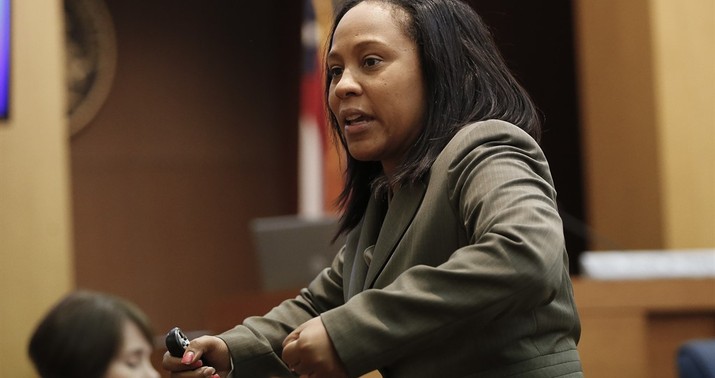 Not unexpected, especially given the drama taking place in Washington, but certainly unwelcome news in Mar-a-Lago. Prosecutors at various levels in Georgia have investigated complaints filed over Donald Trump’s January 2nd phone call to Brad Raffensperger, in which the outgoing president pressured the secretary of state to find the votes that would reverse the election results in the state. Fulton County DA Fani Willis has decided to start the process of opening a criminal investigation on that basis:

Prosecutors in Fulton County have initiated a criminal investigation into former President Donald J. Trump’s attempts to overturn Georgia’s election results, including a phone call he made to Secretary of State Brad Raffensperger in which Mr. Trump pressured him to “find” enough votes to help him reverse his loss.

On Wednesday, Fani Willis, the recently elected Democratic prosecutor in Fulton County, sent a letter to numerous officials in state government, including Mr. Raffensperger, requesting that they preserve documents related to Mr. Trump’s call, according to a state official with knowledge of the letter. The letter explicitly stated that the request was part of a criminal investigation, said the official, who insisted on anonymity to discuss internal matters.

The inquiry makes Georgia the second state after New York where Mr. Trump faces a criminal investigation. And it comes in a jurisdiction where potential jurors are unlikely to be hospitable to the former president; Fulton County encompasses most of Atlanta and overwhelmingly supported President Biden in the November election.

The Fulton County investigation comes on the heels of a decision Monday by Mr. Raffensperger’s office to open an administrative inquiry.

This was the risk Trump created with this phone call. The phone call took place in overlapping areas of jurisdiction, including in the very-blue county in which the capitol rests. Raffensperger may or may not have decided to pursue this as a way to settle matters with Trump, but his Republican base might have otherwise given him pause. Willis has no such problems; in fact, her electorate will cheer her along if she decides to file criminal charges against Trump.

Willis could choose among three charges, or combine them all, the New York Times notes:

Former prosecutors said Mr. Trump’s calls might run afoul of at least three state laws. One is criminal solicitation to commit election fraud, which can be either a felony or a misdemeanor; as a felony, it is punishable by at least a year in prison. There is also a related conspiracy charge, which can be prosecuted either as a misdemeanor or a felony. A third law, a misdemeanor offense, bars “intentional interference” with another person’s “performance of election duties.”

None of these are an easy dunk, however. Fraud is difficult to prove, and Trump would no doubt argue that he really believed voter fraud in the general election had occurred and wanted it reversed. That would tend to negate a fraud charge, or at least create some reasonable doubt about the necessary mens rea with jurors.

The biggest risk in the call was an abuse of power in alluding to potential criminal liability for Raffensperger if he didn’t play ball, but that would have been a matter for Congress. In fact, it is part of the article of impeachment on which Trump is being tried by the Senate, although it’s not the focus of the case. (It also should have been a separate article.) No one in Georgia has the jurisdiction to charge Trump on that basis directly, although it might come into play if they decide to press the “intentional interference” charge.

This seems more like a stunt than a real threat, but at least it’s within the law. If Democrats really want a Plan B when the Senate acquits Trump and takes disqualification off the table, a felony conviction in Fulton County would firmly and legally fill the bill. Trump’s legal team should take this seriously enough to prepare for this eventuality better than it did for the impeachment trial.

Here's why Rep. Kathleen Rice's call for Andrew Cuomo to resign is significant