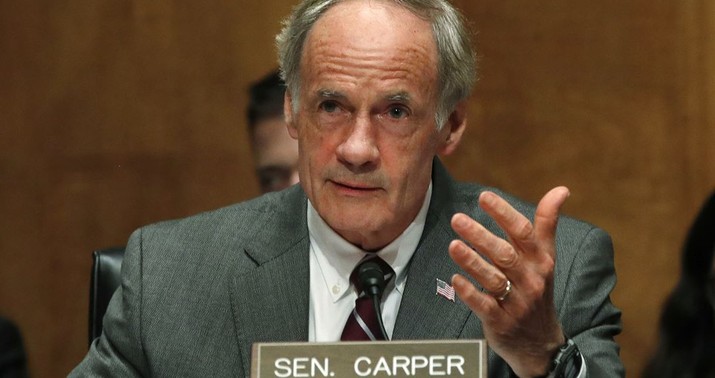 It’s great to get back to the old traditions, no?

For years, I have fought alongside @EleanorNorton and @MayorBowser to make #DCStatehood a reality and to give the over 700,000 D.C. residents a voice, vote, and full representation in Congress.

Today, I'm proud to introduce #S51 to make D.C. the 51st state in our Union. pic.twitter.com/PFBHULC6lj

The media usually needs material between the ceremonial opening of Congress and the State of the Union speech and are tempted to play along. This time, however, NBC News is less than impressed — and less than accurate:

While the bill could pass again in the House, which remains in Democratic control, its chances of clearing the Senate are nil. Democrats control the Senate because, with a 50-50 split, Vice President Kamala Harris can cast tie-breaking votes. But Democrats would need to overcome a filibuster, requiring 60 votes, for the legislation to pass, meaning they would need at least 10 Republicans to join them. Many GOP lawmakers have expressed opposition to statehood for D.C. because its congressional representation would almost certainly be Democratic.

That would be true of adding almost any other territory as a state. For instance, Congress could authorize admitting Puerto Rico as a state under Article IV Section 3, and that may also come up in this session of Congress — assuming Puerto Rico wants to become a state rather than an independent nation. But the District of Columbia has already been defined as a not-state, if you will, in the Constitution’s Article II Section 8 and more explicitly in the 23rd Amendment’s Section 1. That amendment made clear that DC is not a state under the Constitution. To reverse that, the Constitution would have to be amended again, and the special assignment of presidential electors repealed.

Carper and Holmes Norton are attempting a sleight-of-hand around this:

Those opposed to making D.C. a state have argued that statehood for D.C. can’t happen without a constitutional amendment. They say the founders intended the entire District to serve as the seat of the federal government, not as a state. But legislation put forth by nonvoting Del. Eleanor Holmes Norton (D) every year since 1991 would not eliminate the “seat of government” that the Constitution calls for. Instead, H.R. 51 would shrink the national capital to a small complex of federal buildings, while allowing the rest of the District to become a state.

Proponents of statehood argue that this plan preserves the federal enclave — whose only requirement is that it can’t exceed 10 square miles — and escapes the need for a constitutional amendment.

That’s absurd, and would almost certainly be challenged in court even if it passed. Even if it were possible, the retrocessed territory should go back to Maryland, not form an entire state out of the remnants around the Mall. Declaring a new state out of part of a city is so ludicrous that it’s impossible to believe that anyone would take it seriously. What is to prevent Texas from splitting Austin off from Dallas, and Houston off from all of them, in order to get two senators and a representative for each? Every state would start fragmenting to gain advantage in that scenario.

In reality, DC statehood requires an amendment to end its distinct constitutional definitions, and that would get two-thirds majorities in both the House and Senate to pass. After that, it would require three-quarters of the states to ratify the amendment. How many states would agree to give the federal bureaucracy its own state? A few, maybe, but let’s not forget which party controls a majority of state legislatures.

For that matter, Republicans wouldn’t even need a filibuster to kill this bill. Would Joe Manchin vote to give the Beltway two Senate seats and eliminate his leverage? What about other red-state Democrats like Arizona’s Mark Kelly and Kyrsten Sinema, who would have to explain why the federal bureaucracy deserves its own representation in Congress?

It’s going nowhere for lots of reasons. DC already has a city council to run their own business, and that’s all it needs, just like every other city in America. But Carper will get some fundraising mileage out of the effort, and that’s really all that matters in DC anyway.