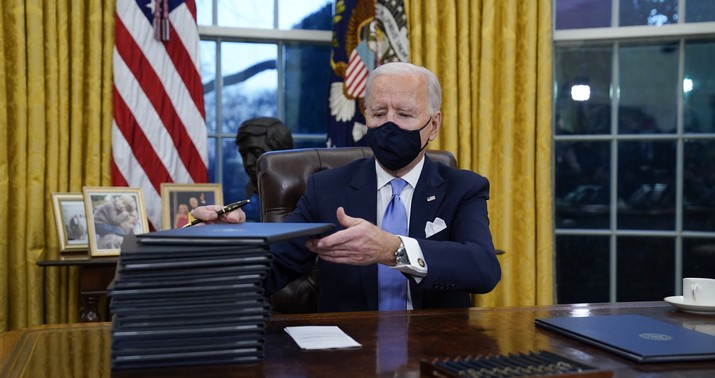 The answer is … yes. Democrats repeatedly pledged over the last two years that they would immediately repeal the 2017 tax-reform bill once back in control of Washington. That included Joe Biden in the earlier part of the primary cycle. Now, however, Biden’s signaling a more cafeteria approach:

Democrats have spent years promising to repeal the 2017 Tax Cuts and Jobs Act, which Republicans passed without a single Democratic vote and was estimated to cost nearly $2 trillion over a decade. President Biden said during a presidential debate in September that he was “going to eliminate the Trump tax cuts.”

Mr. Biden is now in the White House, and his party controls both chambers of Congress. Yet he and his aides are committing to only a partial rollback of the law, with their focus on provisions that help corporations and the very rich. It’s a position that Mr. Biden held throughout the campaign, and that he clarified in the September debate by promising to only partly repeal a corporate rate cut.

In some cases, including tax cuts that help lower- and middle-class Americans, they are looking to make Mr. Trump’s temporary tax cuts permanent.

In fact, those moves to permanency might be as significant as any rollbacks Biden proposes, Jim Tankersley reports. And that might make it difficult to use budget gimmicks to pass other parts of his agenda:

Mr. Biden could end up cementing as much of Mr. Trump’s tax cuts as he rolls back. To meet a budget constraint that was necessary to pass the 2017 law with no Democratic votes, Republicans set tax cuts for individuals to expire at the end of 2025. On Thursday, in follow-up answers to written questions from Senator Charles E. Grassley, an Iowa Republican, Ms. Yellen said she would work with Congress to make tax cuts permanent for families earning less than $400,000 a year.

Such a move would most likely reduce the tax revenue that Mr. Biden could otherwise claim to raise from his proposed changes to the Trump tax by at least half and as much as two-thirds, according to calculations by The New York Times. The calculations used analyses from the congressional Joint Committee on Taxation, the Tax Policy Center, the Committee for a Responsible Federal Budget and the University of Pennsylvania’s Penn Wharton Budget Model.

And that has implications of its own. Senate Democrats plan to make use of the reconciliation mechanism to pass more sweeping legislation in order to avoid Republican filibusters. In order to do that, Democrats have to make those measures deficit-neutral at least, and arguably at least slightly deficit-reducing. The easiest way to do that is to parcel in the tax hikes that would come from repealing the components of the 2017 tax-reform bill. Biden’s new plan puts a $1.5 trillion hole into those strategies.

The problem for Democrats is that Biden recognizes the political reality of a 50/50 Congress and a 50/50 nation, even if the leaders on Capitol Hill do not. He also belatedly realizes that hiking corporate taxes in the middle of an economic crisis is akin to shooting himself in the foot at the very beginning of his presidential term. He needs corporations to invest their money in the US, not go back to sheltering it off-shore. If Biden moves too quickly to jack up corporate rates and penalize foreign earnings again, the recovery will get delayed or canceled altogether as corporations go back to sheltering capital and income.

That’s why, as Tankersley reports, there won’t be any widespread repeal. There will only be incremental changes to tax rates, not tax structure. Biden wants to move up the corporate rate to 28%, still far short of the 35% in the pre-2017 tax law (even if it does incentivize more offshoring in the future). That means that even the parts of the Trump tax reform that aren’t made permanent are still going to remain in place for some time to come.

That won’t make Biden’s progressive wing happy at all. And it might set up a fight in 2022 on the Left that will further challenge incumbents in a cycle that should be tough for Democrats, historically speaking.