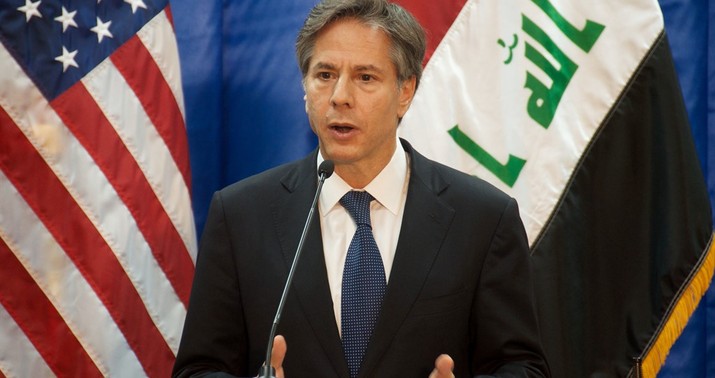 Is it time to say auf Wiedersehen to the two AUMFs that have underpinned our foreign wars for a generation? It’s not the first time Democrats have tried to repeal the 2001 and 2003 authorizations for the use of military force, and Barack Obama and Joe Biden both campaigned for changes to them — while at times arguing that they didn’t matter anyway. Members of both parties have at times wondered when these blank checks will be withdrawn, and occasionally challenge them, but nearly twenty years later, they have withstood all repeal efforts.

With Biden coming back to the White House, Democrats want to try again. And they have new support from Biden’s incoming secretary of state:

Top Democrats are hounding President Joe Biden to bless their mission to revoke war powers that three previous presidents have used as free passes to charge into conflicts around the globe.

The last time lawmakers fulfilled their constitutional duty in voting to authorize military force, Biden was a senator, Osama bin Laden was at large and Saddam Hussein still sat in his Baghdad palace. Some two decades later, support is finally building to yank the outdated war powers that were predicated on the Sept. 11, 2001, terrorist attacks and the fear of weapons of mass destruction. …

“We did try to do this a few years ago, and it’s not easy to get to yes,” said Blinken, who served as deputy national security adviser and deputy secretary of State during the Obama administration. “For some the porridge is too hot. For others the porridge is too cold. And can we get a consensus around what’s just right? But I would be determined and committed to working on that.”

The irony here, of course, is that Donald Trump nearly mooted them during his single term in office. Trump off-handedly opposed changes to the AUMFs for obvious reasons, as that would have created all sorts of restrictions in his ability to operate in the Iraq and Afghan theaters. However, Trump also tried repeatedly to leave those theaters altogether, which would arguably have ended the applicability of those AUMFs. His near-departure from Iraq prompted James Mattis’ resignation, and the blowback from that convinced Trump to reverse that decision. Trump also tried to get out of Afghanistan before the election to fulfill a campaign promise. And of course, one of the more notable achievements Trump had in his term was not starting any new foreign military adventures, even if he did roll the dice on one with the hit on Qassem Soleimani.

That’s not to say that these efforts were wise; Republicans certainly didn’t think so when Obama tried exiting both theaters. But the end of those engagements would have accomplished what Congress has wanted to do for a long time, which is to force any president to come to Congress to seek a new AUMF for any new military engagement overseas.

And that seems pretty reasonable, especially after nearly twenty years of warfare based on those two authorizations. The blank-check aspects of those AUMFs have left Congress with almost no way to check new military actions in these areas. It’s very likely that Congress would replace the old AUMFs with new authorizations that would apply to ongoing operations in both Afghanistan and Iraq, but with far more limitations and likely some deadlines that would force the executive to request renewals. That might lead to the dangers of having 535 commanders in chief, as opponents of repeal have argued at times, but it’s not as if Congress’ role in oversight is illegitimate. The authority to declare war belongs with Congress, not the executive, and the de facto transfer of that authority in those AUMFs is an illegitimacy that matters more.

The consequences of that failure of foresight are not insignificant. Had Congress written these AUMFs better, we might not have had a failed state where Libya used to be, for instance. That might have avoided some if not most of a massive refugee problem in Europe, which might not have destabilized the EU, and which might have kept the UK within the EU. Or at least, Congress would have broadly shared the responsibility for that disaster.

For all these reasons, it seems a lot more likely that Biden will want Congress to overhaul those authorizations. It also seems much less likely that Republicans will actively oppose those efforts, not with an antiwar populist movement still fulminating on the Right. The appetite for these blank checks has been exhausted, politically and popularly, and it’s time for Congress and the White House to recalculate.