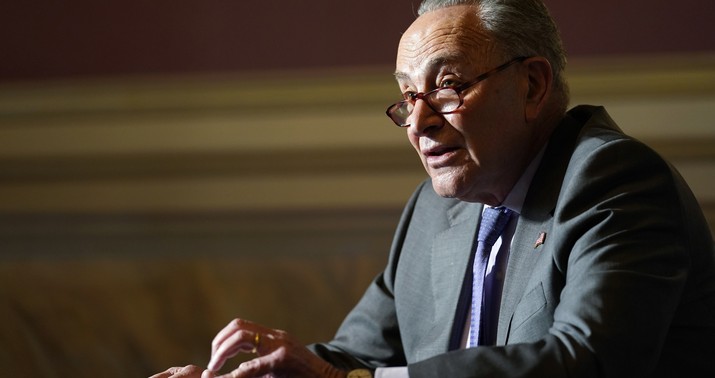 So much for the fierce urgency of now, at least as far as Andrew Cuomo’s concerned. Democrats fought for months with Republicans and kinda-sorta Donald Trump over the scope of COVID-19 relief. Now that they have nominal control over both chambers of Congress and the White House, and Joe Biden calling for “immediate action,” when can we expect it to happen?

There is no time to waste when it comes to tackling the crises we face. That's why today, I am heading to the Oval Office to get right to work delivering bold action and immediate relief for American families.

Apparently, “immediate” is a term of art. Punchbowl’s Jake Sherman reports that Democrats will have their proposal ready for Joe Biden by, um … March?

In @PunchbowlNews AM — Democrats do not expect to be able to send @JoeBiden a Covid relief bill until early March.

Seriously? The Biden administration has already sent its proposal to Nancy Pelosi and Chuck Schumer. Supposedly, that’s part of their ready on Day One agenda. Not that it had to be, since we just passed a trillion-dollar relief package less than four weeks ago. However, Democrats ever since have complained that it was insufficient, and those insufficiencies amounted to a crisis.

CNet followed up this morning by reading tea leaves in Schumer’s floor speech yesterday. What has become a “little clearer,” as CNet puts it, are Schumer’s priorities — and right now Donald Trump is Priority One:

Now that Joe Biden has been officially sworn in as US president, his framework for a $1.9 trillion stimulus package has taken on a new, official gravity. When could it pass, and when could the IRS send the third stimulus check, which Biden has proposed for up to $1,400 per qualified adult? The answers became a little clearer on Tuesday, after incoming Senate Majority Leader Chuck Schumer reaffirmed his agenda for the new Senate.

“Over the next several weeks, the Senate must accomplish three essential items: A second impeachment trial of Donald Trump. The confirmation of President Biden’s cabinet and other key officials. And legislation to provide much-needed, almost desperately needed COVID relief,” Schumer said from the Senate floor. …

Right now, Biden’s stimulus proposal is just that — a framework. It will have to begin to transforming into a law, with all the legal language that can come under extraordinary scrutiny and debate. We know that Biden’s first 10 days in office will focus on a raft of executive actions. Biden can’t send stimulus checks by executive order.

According to a Jan. 19 newsletter from Punchbowl News, a Capitol Hill-based publication founded in January by former Politico journalists: “House Democrats now tell us they are aiming to pass Joe Biden’s massive Covid relief package by late February or early March, according to multiple sources involved in the effort.”

To put it gently, this is nutty. First off, even if one accepts the necessity of an impeachment trial, the emergency has expired on it. Trump no longer is in office and no longer has any official authority, so the Senate no longer needs to remove him. Schumer wants to prevent Trump from running for office again, which won’t even become an issue until the 2024 primary season begins. (Trump’s not going to run for the House or Senate, and Congress only has the authority to disqualify an impeached person from federal office.) Finally, it’s all but certain to be futile anyway, as there aren’t going to be seventeen votes to beat a dead horse in the GOP caucus, now or in the future. Schumer can easily push off the trial to get to issues that matter a lot more to voters.

Furthermore, Biden’s plan was not much more than repackaging the leftovers from Pelosi’s post-election relief bid. He basically just added back in what Pelosi left out of the bill that passed in the final week of December, plus a couple of other hobby-horse items like the $15/hour minimum wage rule. That will certainly create a big fight, especially in the Senate, that might hold up the works — but Democrats could get around that by stripping that provision out of the bill. And note that the “early March” timeframe is just for the House — not the Senate, apparently, which means that the final bill might sneak down toward April Fool’s Day.

This seems a bit off message, considering Biden’s pledge today. Democrats already appear to have learned nothing about setting expectations properly. That bodes ill for the next couple of years, at least for those Democrats.