Axios co-founder: Some Republicans think Trump is sabotaging the Georgia runoff elections, but … 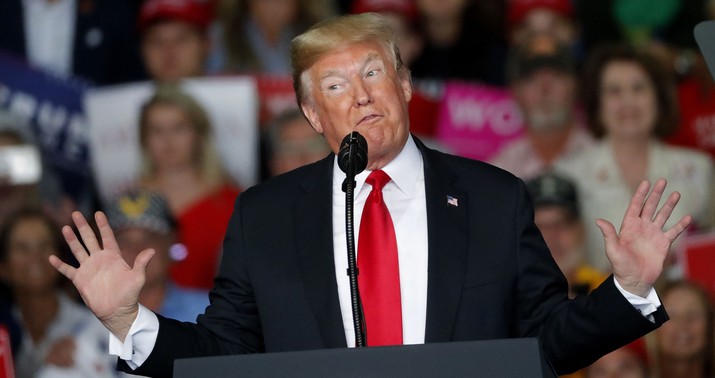 Was Rahm Emanuel right about Donald Trump’s post-election strategy, or is this just a sign of Republican frustration in Georgia? The former mayor posited that Trump would want Republicans to feel as though they had no choice but to stand by him or lose elections in the future, as Axios co-founder Mike Allen tells CNBC’s Becky Quick on Squawk Box. Some Republicans in Georgia think Trump might be trying to set up his argument for renomination in 2024, Allen reports, by tanking the two Senate runoffs next week.

“Every hour that goes by,” Allen says, “Republicans get more worried, more pessimistic.” And that is in large part due to Trump, Allen says:

“There’s a big strain of thought among Republicans that President Trump is sabotaging this race. He’s done so much to be unhelpful to those candidates,” Allen said on “Squawk Box,” referring to GOP Sens. Kelly Loeffler and David Perdue.

“I talk to Republicans and they look at what’s happening, and they say, ’You know, he must be thinking, ‘I want to send a message, If I’m not on the ballot, Republicans are in trouble,’” added Allen, a longtime political reporter in Washington.

I guess one can make that argument, but it doesn’t quite fit the facts at hand. Trump has already held a rally for David Perdue and Kelly Loeffler, and plans another on January 4th. While he hasn’t entirely distanced himself from boycott organizers Sidney Powell and Lin Wood (although that might be coming after Wood’s latest insane rants), Trump has repeatedly urged his followers to vote in the runoffs, even while attacking the voting system and the Republicans running it.

Let’s game this strategic-planning idea out. What happens if Republicans lose the two races in Georgia? Does that allow Trump to argue that they need him on the ticket in 2024? That doesn’t make a whole lot of sense, although we can grant that this is more emotional than rational. After all, Trump lost Georgia when he was on the ticket, and Perdue didn’t get to 50%+1 with Trump atop him on the ballot. Perhaps if the GOP pull out wins in the runoffs, one could make the argument that Trump’s absence actually helped and that’s why Trump doesn’t want them to win … but Republicans routinely win these runoffs anyway. Besides, four years is an eternity in politics, and let’s not forget that we have a midterm in between, too. A win in Georgia with his help would boost Trump a lot more than a loss would, especially if it’s perceived as a deliberate strategy.

Team Trump pushed back against this idea later in the morning:

“Keeping a Republican majority in the Senate has been a priority for the President from the beginning,” Trump campaign spokesman Tim Murtaugh said in a statement Thursday to CNBC. “He will be rallying voters to support Senators Perdue and Loeffler and warning that their opponents are leftist extremists who support higher taxes, the job-crushing Green New Deal, and amnesty for 11 million illegal aliens.”

The sabotage idea is probably nonsense, but the damage Trump is doing is likely real enough even without that intent. By clinging to conspiracy-theory explanations of his loss and by linking himself to Powell and now especially Wood, Trump is certainly doing the GOP no favors in Georgia and is handing Jon Ossoff and Raphael Warnock some pretty good arguments in the final hours. Maybe Wood’s rants about John Roberts and Jeffrey Epstein (covered by Allahpundit earlier) will finally push Trump to throw the pair under the bus, firmly and publicly. If this doesn’t do it, nothing will:

My information from reliable source is that Roberts arranged an illegal adoption of two young children from Wales through Jeffrey Epstein.

I think we can all agree that Epstein knows pedophilia.

If only Jeffrey Epstein was still alive . . .

Wouldn’t that be something? https://t.co/DwhgKO3gMp

I am fully aware of the onslaught of attacks being made against me based on my revelations about Chief Justice John Roberts. Before attacking me, maybe fair-minded people would first ask Roberts to tell the truth.

Or ask Jeffrey Epstein. He is alive.

That’s the thinking that Trump has implicitly endorsed in Georgia. Small wonder Republicans are wondering what in the name of all that’s holy Trump has to be thinking by keeping Wood in the loop.