Ben Sasse: I won’t participate in the January 6 project to overturn the election 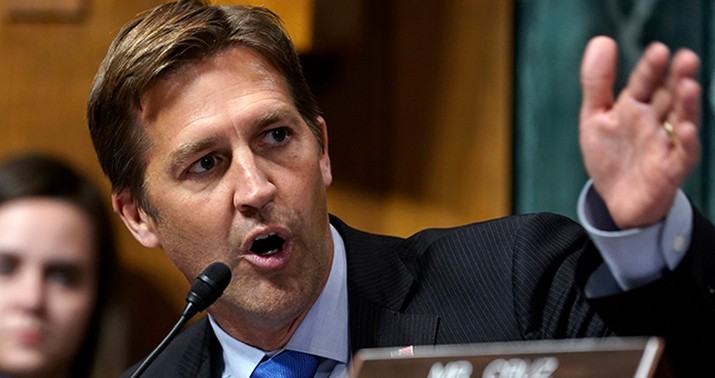 Reading this Facebook post from Sasse in tandem with Lin Wood’s latest tweets makes for a fine year-end snapshot of how far apart the two poles of the GOP are right now on fidelity to America’s traditional civic culture.

It’s also a reminder that, on the spectrum between Sasse and Wood, the president is much closer to the pole that thinks John Roberts is part of some secret child-trafficking cabal than the pole that doesn’t.

I suspect 2021’s going to be a momentous year in Wood’s legal career, although not for the reasons he supposes:

My information from reliable source is that Roberts arranged an illegal adoption of two young children from Wales through Jeffrey Epstein.

I think we can all agree that Epstein knows pedophilia.

If only Jeffrey Epstein was still alive . . .

Wouldn’t that be something? https://t.co/DwhgKO3gMp

I am fully aware of the onslaught of attacks being made against me based on my revelations about Chief Justice John Roberts. Before attacking me, maybe fair-minded people would first ask Roberts to tell the truth.

Or ask Jeffrey Epstein. He is alive.

“I don’t know who needs to hear this again, but voices inside your head don’t count as a reliable source,” tweeted Christopher Scalia, son of Antonin, upon reading that.

Sasse’s post is worth your time although there’s no disputing Matt Lewis’s point that Sasse would have been far more timid here if he were up again for reelection soon. Earlier this year, facing a primary in Nebraska, Sasse not only voted to acquit Trump at his impeachment trial, he declined to join Mitt Romney and Susan Collins in voting to call witnesses like John Bolton to testify. He’s finally found his voice — now that he no longer has anything to lose by doing so, an observation the president himself made not long ago.

The words “Josh Hawley” aren’t mentioned in his comments but it’s clear what drove him to publish this statement. Sasse was doubtless hoping that McConnell would convince his caucus not to object on January 6, sparing all of them from having to take a no-win up-or-down vote on whether to accept the election results from various swing states. Hawley blew that up yesterday. Sasse will now have to show his cards, so he’s showing them early. This bit about certain unnamed “ambitious politicians” who know the election wasn’t rigged but stand to gain by pandering to Trump voters about it has a bit of bite:

When we talk in private, I haven’t heard a single Congressional Republican allege that the election results were fraudulent – not one. Instead, I hear them talk about their worries about how they will “look” to President Trump’s most ardent supporters…

The president and his allies are playing with fire. They have been asking – first the courts, then state legislatures, now the Congress – to overturn the results of a presidential election. They have unsuccessfully called on judges and are now calling on federal officeholders to invalidate millions and millions of votes. If you make big claims, you had better have the evidence. But the president doesn’t and neither do the institutional arsonist members of Congress who will object to the Electoral College vote.

Let’s be clear what is happening here: We have a bunch of ambitious politicians who think there’s a quick way to tap into the president’s populist base without doing any real, long-term damage. But they’re wrong – and this issue is bigger than anyone’s personal ambitions. Adults don’t point a loaded gun at the heart of legitimate self-government.

The passage below is also clearly aimed at Hawley, although not just at Hawley, of course:

Right now we are locked in a destructive, vicious circle:

I can’t simply allege that the College Football Playoff Selection Committee is “on the take” because they didn’t send the Cornhuskers to the Rose Bowl, and then – after I fail to show evidence that anyone on the Selection Committee is corrupt – argue that we need to investigate because of these pervasive “allegations” of corruption.

“Millions of voters concerned about election integrity deserve to be heard,” Hawley tweeted yesterday in justifying his decision to object on January 6. He repeated the point last night in an interview on Fox News, saying, “Now, when Republicans, 74 million Americans have concerns about election integrity, we’re supposed to just sit down and shut up?” That’s dishonest in three different ways. First, Trump and his lawyers have had two months to raise those “concerns” in other forums and have failed at every turn. Trump’s own DOJ has looked for evidence of widespread fraud and can’t find it. Neither can courts. In some cases, Sasse notes, Trump’s team isn’t even alleging fraud in court because the evidence is so thin that they might be sanctioned if they tried. Georgia’s conducted two recounts, a security audit of voting machines, and a signature audit of mail-in ballots in Cobb County to try to ease people’s “concerns,” to no avail. The “concerns” have been ventilated. To the extent that they remain, they’re not in good faith.

Second, the reasons Hawley gave yesterday for why he plans to object have nothing to do with the “concerns” held by the president and most of his fans. Hawley says he wants to raise awareness about conflicts in Pennsylvania’s electoral statutes governing mail-in ballots and how Big Tech put a thumb on the scale in Biden’s favor. Trump doesn’t care about any of that. He wants to hear conspiracy theories about how massive vote-rigging changed the outcome of the election. Hawley’s trying to have it both ways, pandering to MAGA fans by objecting but maintaining a veneer of respectability by not indulging their wildest Lin-Wood-esque allegations. If he thinks widespread “concerns” about election integrity are sufficient to justify disrupting the vote certification on January 6, he should man up and go all-in on what those concerns are actually about — the crankery about Dominion changing votes, China stuffing ballot boxes, and all the rest of it.

And third, as Sasse says, the reason these “concerns” exist in the first place is because Trump and his allies have encouraged them. By Hawley’s logic, any smear campaign no matter how dubious is worthy of being taken seriously by Congress provided that it gains enough adherents. He might as well demand an investigation into Wood’s theories about John Roberts too. After all, millions of QAnon fans have “concerns” about elites feeding on Adrenochrome harvested from trafficked children. Hawley’s created a perverse incentive in which the president will be rewarded by the Senate for his willingness to make wild conspiratorial accusations against election officials. Where does that lead in future elections?

I think the Daily Beast is right, that the January 6 pageant is less about Trump believing that he can cling to power at this point than him wanting reassurance that most Republicans in Congress will still kneel before him when asked. Hawley knelt yesterday. The substance of his complaints next Wednesday will be trivial relative to that fact.