Loeffler: I’ll back $2000 relief checks — if funded by eliminating pork 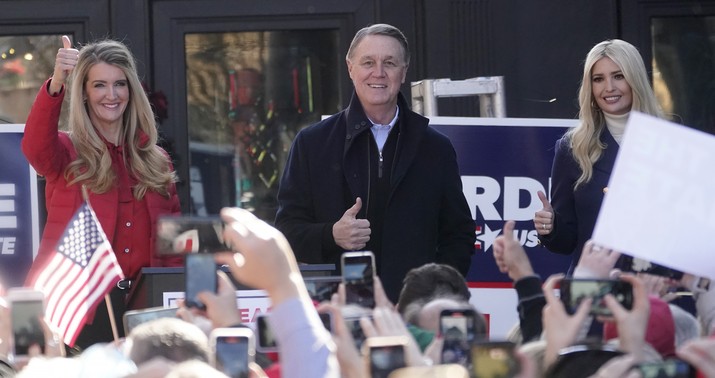 This might be the smartest play left to Kelly Loeffler and David Perdue in Georgia after Donald Trump stunningly blasted Republicans over the COVID-19 relief package. Both Republican incumbents had backed the relief plan passed by Congress after Nancy Pelosi capitulated on the HEROES Act, while their runoff opponents continued to complain about the low dollar amounts in direct relief for taxpayers.

Now that Trump has endorsed the positions loudly espoused by Jon Ossoff and Raphael Warnock, Loeffler doesn’t have much choice but to move — albeit with a caveat that at least puts a little scrutiny back on leadership:

Sen. Kelly Loeffler will consider President Trump’s call for Congress to amend the $900 billion COVID-19 relief bill to increase direct payments to eligible Americans from $600 to $2,000 — if it “repurposes wasteful spending.”

Loeffler (R-Ga.), who is in the political fight of her life in a race that will help decide which party holds the Senate — and has previously said $600 was sufficient — made the comment while speaking to reporters Wednesday at a campaign event with black business owners.

Asked about the commander-in-chief’s call for the amount to be raised, the Trump ally replied that she supports “redirecting any wasteful spending to be very targeted at families and businesses who have been impacted by this virus through no fault of their own.”

Pressed further on whether that meant she would back increasing the direct payments, she answered: “I’ll certainly look at supporting it if it repurposes wasteful spending toward that, yes.”

Well … what else was Loeffler going to say? She can’t contradict Trump, who undercut her and boosted the populism behind Ossoff and Warnock, but she can’t reverse herself completely on the issue without looking like a mindless tool of Trump’s either. This is the closest Loeffler can come to having it both ways, even if it’s still quite a reach.

But what wasteful spending does Loeffler want to cut? Most of that comes in the omnibus spending bill rather than the COVID-19 relief bill, which got pared down to the near-bone in its final form. It took months of negotiations to produce both bills, and to some extent the aid exists because both sides traded pork to get it. What Loeffler suggests would require going back to Square One as a multitude of safety-net programs in the pandemic crisis get shut down. Of course, that also means the odds of Loeffler getting tested on this new position are about nil. In that sense, Loeffler definitely can eat her cake and still have it as well.

But that’s cold comfort for Loeffler and Perdue, who now are at the mercy of Trump’s priorities, which don’t appear to include their elections. The Wall Street Journal editorial board castigated Trump today for his mercurial approach to both the budget and relief bills as well as his veto of the NDAA, warning that it could cost Republicans the Senate and the last chance to restrain the incoming Biden administration:

The NDAA isn’t perfect, but it extends hazard pay for U.S. forces that is set to expire at the end of the year. Mr. Trump’s statement called the bill a “gift” to China and Russia. But we doubt China will see it that way, since it establishes a Pacific Deterrence Initiative that authorizes $2.2 billion for, among other things, putting more military assets in China’s backyard and conducting exercises with allies. The bill also includes an overhaul of the aging U.S. nuclear deterrent, as well as cybersecurity provisions to protect command and control of U.S. nuclear systems.

The House and Senate probably have the votes to override the veto, but the event could still cause problems for GOP Sens. David Perdue and Kelly Loeffler as they try to win their seats in two weeks. They’ll now have to flip their previous votes in favor of the NDAA or put themselves at odds with Mr. Trump.

The same goes for Mr. Trump’s threat to veto the giant Covid relief and omnibus spending bill that passed Congress this week. If he objected to the bad policy in the bill, he’d have a point. But Mr. Trump is griping that the $600 direct payments to Americans in the bill are too small; he wants $2,000, which would cost another $350 billion or so. The President’s negotiators signed off on the $600, and now Democrats are echoing Mr. Trump’s new demand and putting the Georgia Senators in a second bind.

Losing control of the Senate would let Democrats take a machete to his legacy, but only one man knows what is really going on in the head of Donald J. Trump.

The best outcome would be for the House and Senate to add the $350 billion as a supplemental over the next couple of days in order to get Trump to sign off on the bills and avoid the shutdown and the safety-net collapse. That would also boost Loeffler and Perdue by allowing them to embrace both Trump and the overall result. Something tells me, though, that Senate Republicans won’t cooperate, just as they have blocked direct relief for months and only grudgingly budged on that after the election.

That will turn this into a disaster that will get blamed on Trump, and not for no good reason. However, the truth on direct aid is that Trump’s actually right on the politics of relief, even if he’s been disconnected and mercurial about it. Trump should have taken an active interest in this point long before now, but this is one time that Mitch McConnell should listen to what Trump is saying.

'Open the freaking schools!': This dad has had enough, BLASTS school board members over remote learning

Two can play at this game, apparently

Bipartisan Senate pitch: Let’s censure Trump instead of an impeachment trial; Plus: A bill of attainder instead?

The rewriting of history continues in support of Tom Cotton smear

They’ll do anything to cancel conservatives