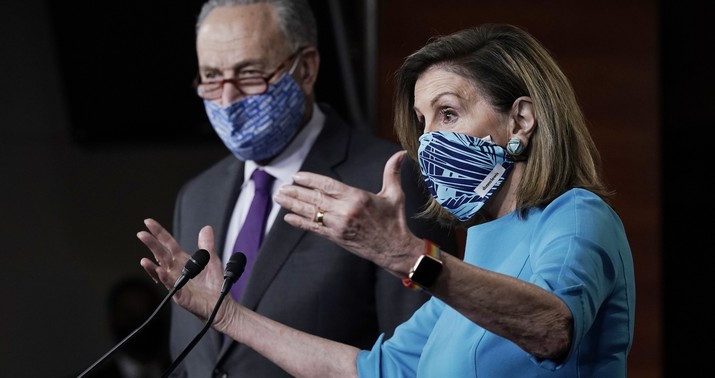 Which Republican wants to play the Grinch on Christmas Eve? After Donald Trump blew up weeks of negotiations over the COVID-19 relief bill last night by claiming the $600 per person check was a “disgrace,” Democrats from Nancy Pelosi to Bernie Sanders rushed to embrace his new proposal for more than three times that amount. According to CBS News, Pelosi and her caucus now plan to introduce a bill tomorrow on unanimous consent that will put money where Trump’s mouth is:

House Democrats will bring forward a bill to provide direct checks of $2,000 to individuals on Thursday, after President Trump called on Congress to amend a newly passed coronavirus relief bill to increase direct payments to $2,000, with $4,000 for a couple. Speaker Nancy Pelosi said the House will try to pass the bill by unanimous consent — meaning that only one Republican member opposing the proposal needs to be present in order to block the bill.

One has to wonder how Trump and Pelosi got to the $2000 per person figure … just as one has to wonder how Steve Mnuchin got to the $600 figure. Why not $4000? Why not $8000? Why not eleventy-thousand? All of this is imaginary money anyway, which is why this process has been absurd from the beginning. That’s especially true for Senate Republicans, who resisted the inclusion of any direct payments to taxpayers, even though a child could have explained how bad the political optics would be to send hundreds of billions in aid to corporations while taxpayers struggled to keep food on the table.

I hope Speaker Pelosi will agree with President Trump that Big Tech needs to be reined in by winding down Section 230 liability protections.

I have reason to believe this combination will lead to President Trump supporting the NDAA and COVID19 omnibus bills.

What in the world does Section 230 have to do with COVID-19 relief — or COVID-19 at all? Trump didn’t even bring up Section 230 in his complaints about the relief bill as passed on Monday. Why should this be a new condition on a completely unrelated issue? Does Graham really plan on blocking relief payments just to satisfy Trump’s demand on Big Tech issues? Other than maybe Trump himself, I’d love to hear Graham’s explanation on who he thinks that will impress.

Pelosi’s smarter than Graham. Let’s see if she’s smarter than Kevin McCarthy and the House Republican caucus. If House Republicans object to the bill tomorrow, Democrats can beat the hell out of them for the next couple of years over aid, especially with Trump’s castigation serving as a perfect foil. Even Donald Trump acknowledged that Republicans are uncaring cheapskates! Of course, this situation might have been avoided had Trump bothered to get personally involved in the negotiations weeks ago and pushed Mitch McConnell into a bigger package of direct relief.