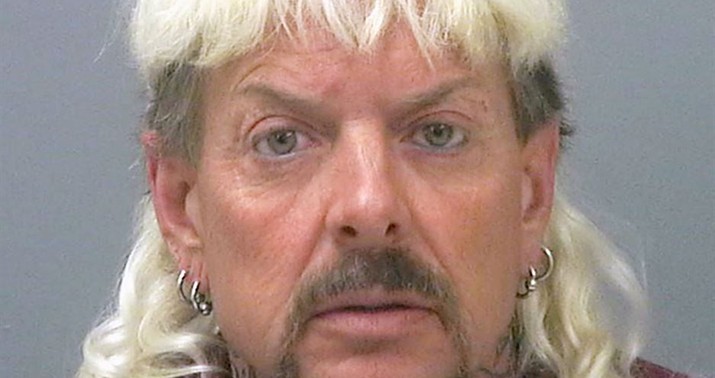 The answers seems rather obviously to be yes, but Joe Exotic has a lot of time on his hands … twenty-two years of it, in fact. That sentence for the Tiger King’s plot to kill rival and critic Carole Baskin is precisely why he wants a pardon. And Maldonado-Passage has filed suit to force the Office of Pardons to pass his application to Donald Trump:

“Tiger King” star Joe Exotic is suing the US Justice Department over the Trump administration’s rejection of his official pardon request, according to a report.

Exotic — whose real name is Joseph Maldonado-Passage — argues that the denial is not valid because the request was not presented directly to President Trump himself.

The suit names Acting Pardon Attorney Rosalind Sargent-Burns, according to a six-page complaint filed by Exotic’s lawyers and obtained by Courthouse News.

The big-cat aficionado first submitted a pardon application on Sept. 8 — and the Office of the Pardon Attorney emailed a response two days later denying the application.

On what basis is the Tiger King challenging the denial? The lawsuit cites 28 USC 1.6, which does seem to indicate that the Attorney General or his delegates have a duty to submit a recommendation to the president, and not just deny a petition outright:

That does make this suit a bit more interesting. Can the Office of Pardon be delegated to weed out the cranks, or do they have to report every petition to the president? The statute does seem to indicate the latter rather than the former, which means that Joe Exotic might have a case here.

It’s not clear from the suit, however, that this didn’t actually happen. The suit claims that the implication from the rejection letter is that this was never presented to the president. The Office of Pardon refused to clarify the issue, apparently:

15. On September 10, 2020, the Office of the Pardon Attorney notified counsel via email that they were denying the request for the waiver, and that their decision was final. Although the email conceded that the President had the ultimate authority to make a decision on the pardon, the email nevertheless implied that the Office of the Pardon Attorney was not sending a recommendation to the President and instead was usurping the role of final decision maker on the pardon.

17. The US Pardon Attorney Office has the ability to search the status of pending applications. 3 A brief search on the U.S. Pardon Attorney website does not reflect that Joe Exotic ever filed a Pardon, or Commutation of Sentence. It does not appear that the application was even considered.

It’s an interesting claim, but it might just be that Trump called up Sargent-Burns and told her no f’ing way after Exotic and his team made it clear that he was going to apply for a pardon. It’s tough to imagine that Trump was completely unaware of Exotic’s efforts, given the media coverage his clemency efforts generated. If it made the New York Post, it’s likely to have made the Oval Office.

Even more peculiarly, the lawsuit tends to undermine its own argument by claiming that Trump’s eldest son had advocated for a clemency action at some point:

13. Many people have come out and publicly expressed their disagreement with Joe Exotic’s conviction and subsequent sentence. Among those, are members of the President’s own family. Donald Trump Junior has been an advocate for Joe Exotic to be Pardoned. Others include, James Garretson, a government witness who testified against Joe Exotic. PostConviction Garretson believes the Government targeted Joe Exotic and that the sentence did not match the crime.

That’s not an entirely accurate characterization of Trump Jr’s position. His argument for a pardon of Joe Exotic was a pwn the media joke back in April, although Don Jr did express some criticism over the sentence:

Donald Trump Jr. said he watched the Netflix documentary “Tiger King” in only two sittings and joked that he could lobby for his father to pardon Joe Exotic simply to watch the mainstream media’s reaction. …

Roberts told him directly, “I feel you, Don, Jr., can go in, make a meeting with your dad and go, ‘Look, I know we’re all dealing with corona and there’s a lot going on right now, but at the same time, maybe a presidential pardon for poor Joe Exotic who’s in there?‘”

“Maybe not right now, but I can generally be for this just for the meme,” Trump Jr. said. “And just for frankly watching the media reaction to this thing. It would be pretty amazing to ultimately see that.”

In that sense, it is a bit amazing that Trump hasn’t issued a pardon or commutation for Joe Exotic. Why wouldn’t Trump Sr have done this “just for the meme,” too? Bear in mind, though, that the application got rejected in September, right in the heat of the general election campaign. A pardon for a dank celebrity like the Tiger King would have made Trump look ridiculous at the time. Now, however, it might give Trump a chance to thumb his nose at everyone … kinda. The outcome of this wouldn’t be so much media reaction as media profit over the coverage. Why would Trump want to give the media that kind of boost, especially while arguing that his departure will crash their business model?

Besides, Trump has bigger fish to fry with his outgoing pardons. He’s much more likely to pardon Edward Snowden and Julian Assange to thumb his nose at the intelligence community, and everyone in Russiagate (except maybe Paul Manafort) to thumb his nose at Congress and Robert Mueller.  The latter would also be all the nose-thumbing Trump would need for the media, too. Joe Exotic’s clemency suit is likely to have just as much chance as a revived clemency application no matter how the court rules on it.