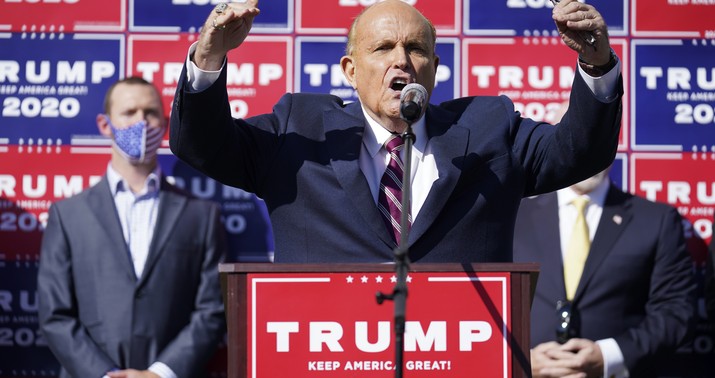 A faint glimmer of hope on the horizon, or just the headlight of another oncoming train bearing down on Team Trump? The Third Circuit agreed to an expedited review of the campaign’s appeal of their loss in Pennsylvania this weekend, which is good news. The bad news is that they’re only appealing the denial by the trial judge of their ability to refile the case that got aggressively quashed:

Read the application for emergency expedited review here. They’re claiming that they can redraft the lawsuit to cure all of the ills cited by the trial judge this weekend, and that the judge erred in not letting them amend the complaint a second time:

6. Further, Plaintiffs believe that the Second Amended Complaint cures any deficiencies noted by the District Court regarding, inter alia, standing, equal protection, and remedy because its allegations are very different than those in the Amended Complaint. Plaintiffs have specifically pled claims based on this Court’s decision in Marks v. Stinson. However, to be clear, Plaintiffs do not intend to waive any claim that any part of the District Court’s decision may have been wrongly decided, including, inter alia, the District Court’s denial of Appellants’ claim for standing and Equal Protection, and can provide supplemental briefing on any such issues if the Court requests.

7. Appellants request that the Court grant expedited briefing on its appeal from the District Court’s decision denying Appellants’ Motion to Amend to File a Second Amended Complaint solely on the basis of undue delay after dismissing Appellants’ Amended Complaint with prejudice. Appellants will, inter alia, request that this Court reverse denial of the Motion to Amend, direct the District Court to promptly decide it on the merits, decide Appellants’ motions regarding discovery (Docs. 118 and 171) and proceed expeditiously to a hearing to enjoin certification of the results of the Presidential Election (or order decertification of already certified) if the Second Amended Complaint is held to state valid claims.

The obvious question that the appellate court will ask is: why didn’t Trump’s lawyers get it right the first two times? After an unfavorable ruling in another court obviated a central argument in the original complaint, Team Trump shuffled its lawyers and amended the complaint to get around the obstacles. Judge Matthew Brann allowed that to take place, but balked the second time when Rudy Giuliani tried to get another delay to withdraw and refile after the hearing had already taken place.

In essence, this appeal will only decide whether to undo Brann’s decision to dismiss with prejudice, which means the same complaint can’t be refiled. It may not even touch on the substance of the complaint, but the state of Pennsylvania will no doubt ask the appellate panel to read Brann’s caustic analysis of the claims. Can a claim described as a “Frankenstein’s monster” be cured?

Plaintiffs’ only remaining claim alleges a violation of equal protection. This claim, like Frankenstein’s Monster, has been haphazardly stitched together from two distinct theories in an attempt to avoid controlling precedent. The general thrust of this claim is that it is unconstitutional for Pennsylvania to give states discretion to adopt a notice-and-cure policy. Invoking Bush v. Gore, Plaintiffs assert that such local control is unconstitutional because it creates an arbitrary system where some persons are allowed to cure procedurally defective mail-in ballots while others are not. …

In other words, Plaintiffs ask this Court to disenfranchise almost seven million voters. This Court has been unable to find any case in which a plaintiff has sought such a drastic remedy in the contest of an election, in terms of the sheer volume of votes asked to be invalidated. One might expect that when seeking such a startling outcome, a plaintiff would come formidably armed with compelling legal arguments and factual proof of rampant corruption, such that this Court would have no option but to regrettably grant the proposed injunctive relief despite the impact it would have on such a large group of citizens.

That has not happened. Instead, this Court has been presented with strained legal arguments without merit and speculative accusations, unpled in the operative complaint and unsupported by evidence. In the United States of America, this cannot justify the disenfranchisement of a single voter, let alone all the voters of its sixth most populated state. Our people, laws, and institutions demand more. At bottom, Plaintiffs have failed to meet their burden to state a claim upon which relief may be granted.

The problem for the Trump campaign’s lawyers will be explaining to the appellate court how an amended complaint would cure the myriad ills that Brann extensively documents in his 37-page opinion. They can’t argue that Brann doesn’t have authority to dismiss a case with prejudice — it’s a basic authority for all judges — so they have to convince the Third Circuit panel that they have a formula that answers all of Brann’s findings. Even then, the appellate court might well just take the path of least resistance and tell the Trump campaign that they should have hired better lawyers from the get-go.

At least the Third Circuit has given Team Trump an opportunity to make the argument, though. That’s at least a momentary win. We’ll see if the pleadings result in the court hearing oral arguments. If they don’t, it’s not likely to be good news for long.

Bro, put the Twitter DOWN: Blue-check journo blaming 'fascists, Trumpkins' for getting his NYT friend canceled in lame thread BACKFIRES

Could One of Pres. Trump's Enduring Legacies Be Exposing a Decline in Civilian Control of the Military