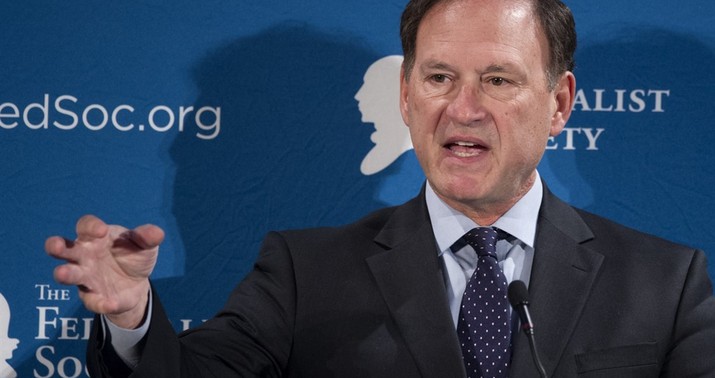 Perhaps gun owners might want to say to Samuel Alito Hold my beer, especially given the Supreme Court’s reluctance of late to take up Second Amendment cases. However, few would argue the justice’s point about the relatively recent hostility to free expression of religion guaranteed in the First Amendment, and not just in relation to COVID-19 shutdown orders.

The shutdowns and their arbitrary nature were the context cited last night in a speech Justice Alito gave to the Federalist Society, whose members might be surprised at just how much news they made last night. In fact, Alito made news on a variety of topics to which we’ll get in a moment, but religious liberty was clearly central to his concerns. Alito argued that it is “fast becoming a disfavored right,” as courts allow government to intrude even on religious worship, a place where they have rarely dared to venture in the past (via Newsalert):

“We have never before seen restrictions as severe, extensive and prolonged as those experienced for most of 2020.”

“The COVID crisis has served as sort of a constitutional stress test,” he said during his address over a video link for the conservative organization’s annual conference. …

“It pains me to say this,” Alito added, “but in certain quarters, religious liberty is fast becoming a disfavored right.”

True enough, because in some states, those shutdown orders imposed more stringent restrictions on worship services than on general commerce. No one had any firm data that one was a greater risk than the other, leading some to argue that perhaps church should be held in Wal-Marts instead. Unfortunately, the Supreme Court punted on this issue more than once this year, and Alito seems to hint that these “certain quarters” are within the court on which he currently serves.

If so, Alito will get another opportunity to test that theory. SCOTUSblog reported last night that the Catholic diocese of Brooklyn has filed for a grant of certiorari regarding New York’s new restrictions on in-person worship:

The Roman Catholic Diocese of Brooklyn asked the Supreme Court on Thursday to block limits imposed on in-person church attendance because of the coronavirus pandemic. The plea renews a dispute over restrictions on worship services while some secular businesses remain open. The Supreme Court rebuffed similar challenges over the summer, but this is the first one to come to the justices since Justice Amy Coney Barrett’s confirmation last month, and the diocese could find more success before the now more conservative court.

The order at the center of Thursday’s filing, issued by New York Gov. Andrew Cuomo (D) in October, limits in-person attendance at church services to either 10 or 25 people, depending on the number of COVID-19 cases in the areas in which a particular church is located. As a practical matter, the diocese contends, the order “effectively bars in-person worship at affected churches – a ‘devastating’ and ‘spiritually harmful’ burden on the Catholic community.” By contrast, the diocese noted, many secular businesses, including “everything from supermarkets to pet stores,” are allowed to stay open.

The diocese went to federal district court in New York, where it argued that Cuomo’s order violates the Constitution’s free exercise clause. Both the district court and the U.S. Court of Appeals for the 2nd Circuit declined to block the limits, leading to Thursday’s appeal to the Supreme Court.

I’ll discuss this case later today when I guest host on Relevant Radio from 3-6 pm ET. The two earlier cases in San Diego and Colorado went down to defeat on 5-4 votes on requests for emergency orders, but Amy Coney Barrett’s addition to the court might make a difference.

Alito wasn’t just talking in terms of COVID-19, however. The Washington Post’s Aaron Blake called his address “provocative [and] unusually political,” covering a wide range of subjects. Alito tied religious freedom to freedom of speech, lamenting that decisions like Obergefell have been twisted into silencing dissent and intruding on personal choice:

But it would be easy to put together a new list called “Things You Can’t Say If You’re A Student or Professor at a College or University or an Employee of Many Big Corporations.” And there wouldn’t be just seven items on that list; 70 times seven would be closer to the mark.

I won’t go down the list, but I’ll mention one that I’ve discussed in a published opinion: You can’t say that marriage is a union between one man and one woman. Until very recently, that’s what the vast majority of Americans thought. Now it’s considered bigotry.

That this would happen after our decision in Obergefell should not have come as a surprise. Yes, the opinion of the court included words meant to calm the fears of those who cling to traditional views on marriage. But I could see, and so did the other justices in dissent, where the decision would lead. I wrote the following: “I assume that those who cling to old beliefs will be able to whisper their thoughts in the recesses of their homes, but if they repeat those views in public, they will risk being labeled as bigots and treated as such by governments, employers and schools.” That is just what is coming to pass.

Alito then made a direct reference to Masterpiece Cakeshop:

Alito went on to take issue with the arguments in a number of religious liberty cases. He suggested there was no actual harm in a Colorado bakery refusing to make a cake for a same-sex wedding, noting the couple “was given a free cake by another bakery, and celebrity chefs have jumped to the couple’s defense.”

“For many today, religious liberty is not a cherished freedom; it’s often just an excuse for bigotry, and it can’t be tolerated even when there is no evidence that anybody has been harmed,” Alito said.

Alito even did get around to the Second Amendment, but more in the context of politicization of the judiciary and the flat-out attempts to bully the court by elected officials who should know better:

In another particularly political section, Alito went after five Democratic senators whom he accused of “an affront to the Constitution and the rule of law.”

Those senators, led by Sen. Sheldon Whitehouse (D-R.I.), argued in a 2019 brief that the court should drop a key gun rights case in New York and suggestively referred the idea that the court might need to be “restructured”:

After receiving this warning, the court did exactly what the city and the senators wanted. It held that the case was moot and it said nothing about the Second Amendment. Three of us protested, but to no avail. Now, let me be clear again: I’m not suggesting that the court’s decision was influenced by the senator’s threat, but I am concerned that the outcome might be viewed that way by the senators and others with thoughts of bullying the court.

This little episode, I am afraid, may provide a foretaste of what the Supreme Court will face in the future, and therefore I don’t think it can simply be brushed aside. The senators’ brief was extraordinary. I could say something about standards of professional conduct, but the brief involved something even more important: It was an affront to the Constitution and the rule of law.

Blake’s correct in describing this as provocative, but I’d also add “provoked.” It’s clear that Alito thinks the court needs to retrench on religious liberty. The Archdiocese of Brooklyn should see this as a very hopeful sign on their petition for certiorari.