Bush v Gore’s winning attorney: “I do believe the election is over” 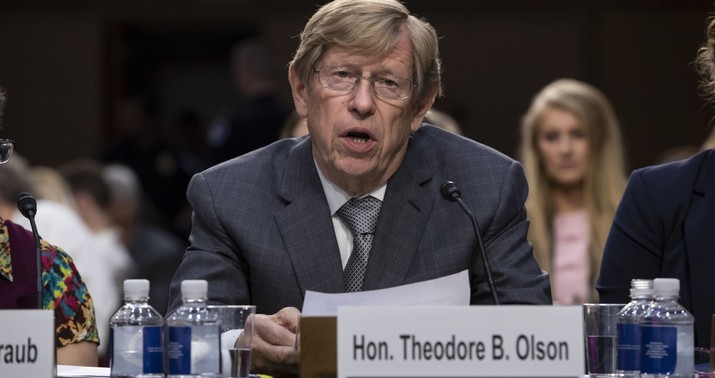 This message is notable for both the source and the venue. Speaking at The Federalist Society, which might have claim to the title of the most influential and successful of activist organizations in Donald Trump’s presidency, Ted Olson delivered the bad news. Having fought an election challenge battle twenty years ago and won in Bush v Gore, the former Solicitor General says this fight is over and we have a new president, like it or not:

Olson, a partner with Gibson, Dunn & Crutcher who went on to serve as solicitor general in the Bush administration, made the remarks during a panel on the powers of the presidency hosted by the Federalist Society, as he discussed checks against the president.

“And we do because a large number of people expressed disapproval, whether one agrees with that or not, of the manner, style and techniques of this particular president,” Olson continued. “So we do have a Constitution that works pretty well. At the end of the day, we are going to have flawed individuals holding that office, and the people ultimately have the responsibility and opportunity to make a change when they feel it’s appropriate.”

That had to be a bit of a buzzkill at the Federalist Society. They played a crucial role in assisting Trump in filling open seats in the federal judiciary for the past two years, perhaps Trump’s best gift to conservatives. It’s certainly going to be his most lasting legacy, thanks to both Harry Reid and Mitch McConnell, who combined to let Trump appoint conservatives with impunity during that period. If any outside group had a reason to want some sunshine blown up its skirts over the election challenges, it’s the Federalist Society.

And yet, here we are. Olson might not have the same draw among conservatives that he once did, after representing the same-sex marriage advocates in Obergefell, but he’s still a towering figure among more libertarian circles within the movement. No one doubts his expertise on election fights, either. But you don’t need a law degree to see the gaps in the states Trump’s challenging to know that this is an exercise in futility.

In fact, a New York Times report this morning suggests that Trump sees the futility as well. “He knows it’s over,” one source says, but he’s still spitballing on potential ways to test the system:

At a meeting on Wednesday at the White House, President Trump had something he wanted to discuss with his advisers, many of whom have told him his chances of succeeding at changing the results of the 2020 election are thin as a reed.

He then proceeded to press them on whether Republican legislatures could pick pro-Trump electors in a handful of key states and deliver him the electoral votes he needs to change the math and give him a second term, according to people briefed on the discussion.

It was not a detailed conversation, or really a serious one, the people briefed on it said. Nor was it reflective of any obsessive desire of Mr. Trump’s to remain in the White House.

“He knows it’s over,” one adviser said. But instead of conceding, they said, he is floating one improbable scenario after another for staying in office while he contemplates his uncertain post-presidency future.

So why fight it so hard? Three guesses:

By dominating the story of his exit from the White House, he hopes to keep his millions of supporters energized and engaged for whatever comes next.

That makes a lot more sense than actually taking the OANN Dominion story seriously. Team Trump clearly isn’t doing the latter, as there hasn’t been any legal filings on it, at least not yet. Trump’s playing out the legal string for as long as he can, and then will likely shift to whatever post-presidential project that suits him best. Trump News Network seems like the likeliest prospect, given his recent broadsides against Fox News. Get ready for paid-entry rallies and big book deals to help fund those projects in the near future.