Too good to check: Is Putin about to retire? 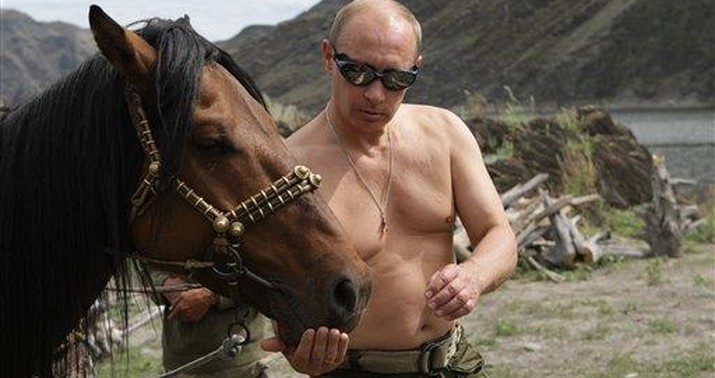 His lips say nyet nyet nyet, but Vladimir Putin’s flunkies in the Russian Federal Assembly have suddenly taken a big interest in lifetime presidential immunity from prosecution. The British tabloid The Sun reported on Thursday that the Russian strongman had started laying out plans for retirement, thanks to medical issues that might indicate Parkinson’s disease. Putin’s mistress and family are supposedly pushing him to leave office soon, according to their on-the-record source, possibly as early as January:

VLADIMIR Putin is planning to quit early next year amid growing fears for his health, Moscow sources claimed last night.

And informed analysts claimed that the Russian president’s glamorous ex-gymnast lover Alina Kabaeva, 37 – once dubbed ‘Russia’s most flexible woman’ – is begging him to release his grip on power.

Observers who studied recent footage of Putin noted his legs appeared to be in constant motion and he looked to be in pain while clutching the armrest of a chair.

His fingers are also seen to be twitching as he held a pen and gripped a cup believed to contain a cocktail of painkillers.

The Sun has a one-minute video embedded in their report that shows … nothing much at all. Putin appears to be paying homage to the  Russian military at a memorial and then chatting up young Russians without much more than some stiffness in a leg. He looks in this clip like a fairly healthy 68-year-old, whose age might become a worry but otherwise looks unremarkable.

The Kremlin called the report “pure nonsense” yesterday, but US News wondered why it got under their skin:

THE KREMLIN ON FRIDAY insisted that Russian President Vladimir Putin is in good health and has no plans to resign – a rare on-record comment about the guarded leader’s private life forced by a speculative report in a British tabloid suggesting he “has possible symptoms of Parkinson’s disease.”

“No,” spokesman Dmitry Peskov said Thursday morning when asked whether Putin has plans to resign. “He is in excellent health.” …

It was unclear why the Kremlin felt obligated to address the report and reference it through its heavily controlled state media service, though Putin has been notoriously image-conscious throughout his tenure and has long sought to project displays of his vitality.

The future of Putin’s tenure has indeed wrought international scrutiny in recent months. Having served for longer than any leader in Moscow since Josef Stalin, Putin consolidated power in early January through a series of forced reforms that essentially allows him to remain in power indefinitely.

That, however, raises questions about this new effort in the Federal Assembly. Among the proposals under consideration, the Moscow Times reported at about the same time as The Sun’s story went live, is a new law that would grant former presidents lifetime immunity from prosecution. Gee, whomever could they have in mind?

Under current laws, presidents cannot be held criminally or administratively liable for crimes committed while serving their terms. A parliamentary working group assessing Putin’s constitutional reforms proposed earlier this year to extend presidential immunity beyond their terms of office.

“The bill secures immunity guarantees for ex-presidents beyond the terms of their presidential powers,” Interfax quoted Senator Andrei Klishas, the group’s co-chair, as telling reporters.

“This expands the timeframe of immunity guarantees for a president who stops exercising their powers,” added Klishas, who chairs the upper-house Federation Council’s Committee on Constitutional Legislation and State Building.

Under the law, the assembly could strip former presidents of immunity on a case-by-case basis, but only with a two-thirds vote in both chambers of the bicameral body. This would be included with another Putin “reform” proposal that would grant a permanent seat in the upper chamber to ex-presidents. The presence of the ex-president in the body would certainly make such a vote awkward.

But that’s down the road. The main question at present is why Putin is working so hard on a golden parachute for former presidents. He’s literally the only other person to whom these reforms would apply. Dmitry Medvedev served one term as president as a placeholder for Putin, who was term-limited under the Russian constitution at that time … a limit that was later removed in an earlier “reform.” The only other president was Boris Yeltsin, whom Putin replaced in 1999 and who died in 2007. Perhaps the meaning could be stretched to include Soviet leaders, but that would only add Mikhail Gorbachev. And Radio Free Europe noted on Thursday that it doesn’t appear that Putin’s anxious to include his sometime-critic under an umbrella of immunity by equating him to the presidency. The only members of this club are Putin and Medvedev, and no one can think that Putin’s worried about his former lackey, who got demoted to a subordinate position in Putin’s last set of constitutional “reforms.”

Perhaps this is all a coincidence, but erecting a permanent bar to prosecution seems like an odd move for someone who foresees no clouds on his horizon. This looks like a plan with a purpose, and not a plan for a decade out.  To quote the inimitable Fred Dalton Thompson’s character in The Hunt for Red October, well … you know …