Deep thoughts: Can the Senate be un-nuked? 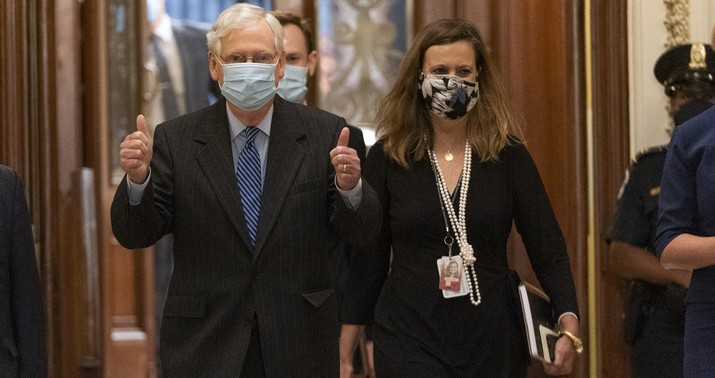 This might seem like a strange question to ask in the midst of all the insanity today. The idea, however, would be to figure out a way to dial some of it back, at least in some small measure. If the current results hold up in the election — meaning that Joe Biden wins the presidency and Republicans control the Senate — then Mitch McConnell becomes the biggest Republican power broker in Washington for at least the next two years.

This gives McConnell some room to negotiate on a lot of fronts, in the lame duck session and in 2021, assuming we ever get there. If McConnell wants to re-set the course for the Senate, he has a move to put on the table — restore the filibuster to presidential appointments.

So what should we call the opposite of a “nuclear option”? And can the Senate ever be effectively de-nuked?

Let’s step through the benefits first. If and only if Biden takes the presidency and McConnell controls the Senate, then Cocaine Mitch doesn’t need the filibuster anyway. He and his committee chairs can simply refuse to consider a nominee that is too radical, a helpful brake on the influence that progressives will try to use on Biden. For at least the first two years, Biden will have to nominate people closer to the center for all Senate-confirmable positions in order to get past McConnell.

Why restore the filibuster on presidential appointments if McConnell won’t need it? For one thing, Republicans won’t control the Senate forever. They will once again be at a numerical disadvantage in 2022, defending 22 seats to Democrats’ 12. A Biden midterm might provide some gains, but eventually Democrats will get control of the Senate at some point. It is in the GOP’s long-term interest to reset minority rights back to their pre-2013 status. It’s also better in terms of political messaging and PR to do it when it doesn’t come to the GOP’s immediate benefit.

But wait, people will object, Democrats can simply use the nuclear option again when they get control. And … that’s true. However, the backfire on Harry Reid’s stunt over the last four years might have made them cognizant of the risks inherent in majoritarian power plays. Politically speaking, it would reflect poorly on their motives to nuke the Senate all over again — and it would force them to do it rather than just simply follow along the rules that Reid established in 2013 and McConnell expanded in 2017 in retaliation. It would require an overt act that could very well cost them in a following election, which is exactly what happened to Senate Democrats after that 2013 power play. And they haven’t won control of the upper chamber since that time, if yesterday’s results hold up.

Even if Senate Democrats did re-nuke the Senate at some point, what’s the harm in the meantime? As long as Republicans keep a Senate majority in a Democratic administration, they won’t need the filibuster. And if Democrats go back to mindless obstructionism in a Republican administration, then the GOP can simply revive the nuclear option themselves using the simple-majority precedent that Reid conjured up out of thin air — but that would be a problem for another time.

At worst, it would do no harm. At best, it might restore a little bit of the comity necessary to get the Senate functioning properly again, and offer a bit of an olive branch in the generation-long judicial wars in the upper chamber. Those wars have done an enormous amount of damage to good people who got demonized simply for being nominated to the bench. It would also grant McConnell the moral high ground in the Senate, which would be about as Cocaine-Mitch-y as it could possibly get after scoring three successive Supreme Court confirmations in the last four years. If it doesn’t restore some comity or at least respect, again, we haven’t lost anything in the meantime.

So … who’s up for “Denuclearization Now!” as a slogan?