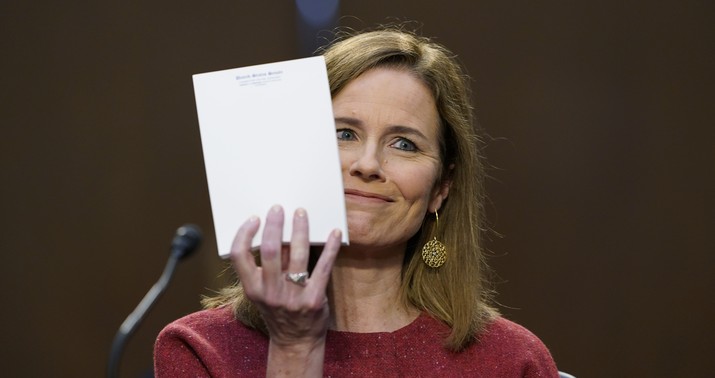 When the confirmation hearing ended on Thursday, I wrote that the smartest option for Senate Democrats would be to move to an immediate vote on Amy Coney Barrett. Their attempts to delegitimize Barrett and the nomination process failed so obviously, and Barrett performed so well, that her continuing presence in the news would only make Donald Trump look better. Instead, Senate Democrats keep making Barrett their focus, while half-heartedly going through the motions in an obviously futile effort to stop her confirmation to the Supreme Court.

Just how obviously futile has this effort been? Morning Consult’s new poll shows a majority of Americans now favor Barrett’s confirmation, matching Gallup’s latest results. And guess where that growth in support originates?

Following four days of hearings, 51 percent of voters said the Senate should vote to confirm Barrett to the Supreme Court, up 3 percentage points from the week before and an increase of 14 points since Trump announced her nomination on Sept. 26. It’s a higher level of support than Morning Consult measured at any time during the confirmation processes for Justices Neil Gorsuch and Brett Kavanaugh — the two other jurists Trump has tapped for the high court during his presidency. …

There’s been a slight uptick in support for Barrett’s confirmation among GOP voters, but the bulk of the movement was driven by independents, a 44 percent plurality of whom now back her confirmation, and Democrats. The share of Democratic voters who back Barrett’s confirmation (32 percent) is up 5 points from the previous week, and up 18 points from the day Trump nominated her, while the share who say she should be voted down has fallen to 48 percent.

So the net effect of the hearing was … to convince more Democrats and independents that Trump made a good choice for the Supreme Court. Helluva job, Senate Democrats!

To my point about political focus, more Americans paid attention to Barrett’s hearing last week than they did to the dueling town halls of the presidential candidates on Thursday. That makes Barrett the lead political story of last week, which puts her stellar performance foremost in voters’ minds at just the time that Democrats want Trump to be the focus:

Just over a third of voters (34 percent) said they’d seen, read or heard “a lot” about Barrett’s confirmation hearings, which garnered ample attention from cable news networks and the national press. It’s more than the 27 percent each who said the same of the dueling televised town halls for Trump and Democratic presidential nominee Joe Biden on Oct.15, but less than the 38 percent who’d heard a lot about Barrett’s nomination in the days after Sept. 26 or the 58 percent who’d heard a lot about Ginsburg’s death on Sept. 18.

It’s the worst of all worlds for Democrats. They raised the stakes enormously for this hearing, laid all sorts of traps, only to have Barrett perform brilliantly at the moment of greatest public interest. In doing so, they undermined their process argument, as a 45/34 plurality now believe the Senate should vote to confirm Barrett immediately — regardless of who wins the election. (Also interesting: A narrow plurality thinks Barrett will move the court in the correct direction, 32/25.)

Ironically, Mitch McConnell’s doing his best to bail Senate Democrats out of their own trap by fast-tracking the confirmation vote:

“With regard to the Supreme Court justice … we’ll be voting to confirm justice-to-be Barrett next Monday,” Senate Majority Leader Mitch McConnell (R-Ky.) said during a weekly press conference, confirming the timing of a final vote on her nomination.

“I think that will be another signature accomplishment in our effort to put on the courts, the federal courts, men and women that believe in the quaint notion that maybe the job of a judge is to actually follow the law,” McConnell added.

Top GOP senators and aides had previously indicated to The Hill that they were likely to set up the final vote for Monday, allowing vulnerable GOP senators to spend the final week before the election back on the campaign trail.

There are good reasons to do this, so it’s not a tactical mistake by McConnell. Far more Republicans are defending seats in the Senate than Democrats this cycle, so they need the upcoming recess more urgently. Also, the longer Barrett waits for the vote, the more time there will be for smear merchants to take their shots at her. By moving immediately on Thursday afternoon’s expected endorsement from the Senate Judiciary Committee and holding a Sunday session, McConnell will expedite Barrett and also leave room for passage of a Phase 4 bill, if an agreement comes to pass.

Still, Senate Democrats might be better advised to ask Lindsey Graham to call the meeting today and waive most of the debate on the Senate floor to get Barrett off of center stage. The longer she’s there, the more popular she’s becoming even among their own supporters.