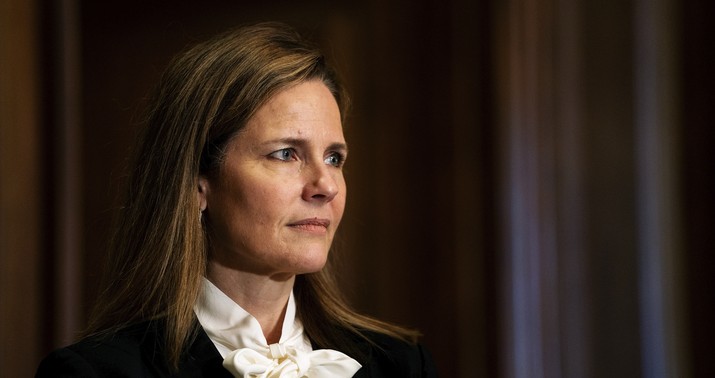 The good news: the circus is back in town! The bad news: it’s run by the same clowns that gave us the Brett Kavanaugh hearings. Starting at 9 am ET today, the Senate Judiciary Committee will officially open the confirmation hearings for Amy Coney Barrett’s nomination to the Supreme Court. The hearings will run through Thursday, and if the Senate Democrats are running the same playbook, that means the Traditional Unsubstantiated Smear should emerge by, oh, a week from tomorrow.

In the meantime, we can all enjoy the other traditions — the Kamala Harris smirk and self-triggered trap, the Maizie Hirono attack on faith, Cory Booker’s Inner Spartacus, Sheldon Whitehouse’s deep dive on Barrett-era high-school slang, and so on. Boof, boff, whatever it takes.

At least Barrett seems to take this seriously. Late yesterday, the nominee released her opening statement to the media. In it, Barrett mostly discusses her personal life and career arc in humble and grateful tones. However, she does also lay out her judicial philosophy and ties it back to the separation of powers in the Constitution. Judges apply the law, Barrett explains, the law that legislatures create:

This is nothing new for con-law students, or even those who had a decent civics class in high school. Barrett shrewdly countered the activist argument in the last paragraph; no doubt, some on the committee will lecture Barrett that her role is more than just applying the law but also siding with the less fortunate. That, however, is the role of legislatures and executives, not the judiciary. The other two branches handle policy, while judges deal with the law itself without fear or favor. What judges do owe the losing side is empathy when possible, and respect at all times. Nevertheless, expect to hear grave concern among the committee’s Democrats that Barrett expects legislatures to do their jobs rather than have courts do it for them.

The national poll finds 44 percent of registered voters say the U.S. Senate should hold hearings and vote on Barrett’s nomination, while 52 percent say filling this Supreme Court seat should be left to the winner of the presidential election and a Senate vote next year. Support for leaving the decision to the next president is down from 57 percent in a Post-ABC poll last month that asked whether the Senate should confirm Trump’s nominee, who had not yet been named.

Voters hold more lopsided views on the court’s ruling in the 1973 landmark abortion case Roe v. Wade, with 62 percent saying the Supreme Court should uphold the decision that guarantees a woman’s right to abortion, while 24 percent say it should be overturned and a sizable 14 percent have no opinion.

Popular support has little to do with this anyway, but I’m a little suspicious of the manner in which this question got polled. It comes at the very end of a lengthy poll that mainly focuses on Trump’s approval ratings, overall and on specific issues, and electoral questions. The tenor of the questions may have discouraged some participants to drop out before the end. Why not just poll on this specific question? It’s also interesting that the gap on the hearing is much smaller than that on Roe, and also slightly smaller than the 12-point gap in this poll between Trump and Biden.

Regardless, the circus will go on, starting at 9 ET this morning. The real high-wire act will come tomorrow and Wednesday for Barrett as the clowns try to knock her off by throwing anything they can find at her. CBS has a live stream available to watch it right here, and feel free to bring peanuts to toss to the elephants … who have long memories about what happened to Kavanaugh.

Update: The questions begin tomorrow, not this afternoon. I have corrected the paragraph above to reflect that.