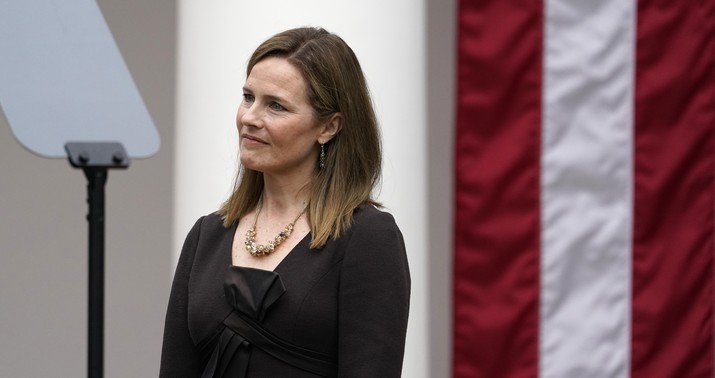 A little good news this morning for the GOP amid an otherwise grim moment.

46% of voters in our latest poll with @politico said the Senate should confirm Judge Amy Coney Barrett to the Supreme Court — up 9 percentage points since President Donald Trump announced her nomination on Sept. 26. https://t.co/dplWQ3XLrB pic.twitter.com/NnQwx1EblX

Previously a plurality of independents had opposed confirmation. Now a plurality supports it. Even Democrats have softened (a little). How come? Take your pick of possibilities:

1. Voters don’t care about process, which is the main objection to Barrett at the moment. Political junkies can bicker about the propriety of blocking Garland four years ago and then ramming Barrett through now, but most Americans don’t care or follow politics closely enough to invest in that debate.

2. Barrett’s made a good impression. Her legal peers, including those on the left, seemingly can’t pay her enough compliments for her intellect and character. And her big family made for an adorable scene in the Rose Garden at the White House. What’s not to like?

3. Some of her critics have made a bad impression. The effort to paint her as a religious fanatic or kook is … not going well.

4. Conceivably, Barrett has gained a bit of sympathy due to the fact that her grand introduction to the public is now suspected to have been a COVID superspreader sh*tshow that took out half the White House. That’s not her fault. It’s a shame history will remember it that way.

Not only do Americans now support confirming Barrett, they’ve shifted slightly from opposing her confirmation before the election to narrowly supporting it. Two weeks ago they split 40/39 in favor of making confirmation contingent upon Trump winning the election. Now they split 43/37 in favor of doing it before the vote. Which makes me wonder if some segment of the “wait until Trump wins” group in the previous poll was confident at the time that he was going to be reelected and has grown less confident after the double whammy of his debate performance and COVID diagnosis. But maybe not: Even Dems have shrunk from 79 percent in favor of waiting until after the election to confirm her to 59 percent in favor of doing so.

All of which adds up to some alarm bells for Democrats. Part of their closing argument against the GOP is that the Barrett Court is going to nuke legal abortion *and* coverage for preexisting conditions under ObamaCare. They’ve spent two weeks making that point repeatedly on the trail. And … voters are more pro-Barrett today than they were before that messaging began. If that’s true, packing the Court may be an even bigger loser politically than anyone thought. And it already seemed like a pretty big loser.

Rising support for Barrett *could* also mean rising support for Lindsey Graham in his South Carolina Senate race. Graham’s the head of the Judiciary Committee and will be front and center when confirmation hearings begin next week. If he makes a good show there, as he tends to do at SCOTUS hearings, maybe that’ll bring home some of the wayward Republican voters in SC who keep refusing to commit to him in polls of that race. As things stand, the Cook Political Report now rates his chances against Democrat Jaime Harrison as a toss-up — a shocking verdict given Graham’s long incumbency and South Carolina’s status as a red stronghold. If SC is in play, virtually everything’s in play.

Republicans certainly hope that heavy coverage [of the hearing] can help consolidate Republican votes and remind them why they want to vote for a GOP majority on judges, with Graham being the only way to get that.

At the candidates’ first debate this past Saturday, Graham repeatedly hammered home his sway on the court and judicial nominees, turning nearly every question back to Barrett or his support for Trump’s appointees. Harrison, in turn, evoked the coronavirus crisis and how badly it’s hit South Carolina — punctuated by a plexiglass shield he brought with him to the debate to separate himself from Graham. While the senator tested negative for COVID after being exposed to other senators who tested positive, there would still be a 14 day quarantine per CDC guidelines. In that regard, the chasm between them on the pandemic wasn’t just metaphorical, and Graham could face some blowback for pushing ahead with the hearings on such a rushed timeline even as two committee members have tested positive for the virus. Even some Republicans privately concede it was Harrison, not Graham, who came out looking stronger from that showdown.

That’s an important point. As it happens, the one number in today’s Morning Consult poll that wasn’t encouraging for Republicans was the share who thought Barrett’s confirmation hearing should be postponed in light of Trump’s COVID diagnosis. Fifty-four percent said so, including 46 percent of indies and even 30 percent of Republicans. I expect Democrats will use the hearing as a platform to hammer at that along with the expected scaremongering about Roe v. Wade and ObamaCare. “We shouldn’t even be here today! We should be isolating to protect ourselves and our families, but once again these reckless Republicans care more about their agenda than the health of people around them!” How does that play in SC? No idea.

Two last points. Although the public *momentarily* supports confirming Barrett before the election, if something happened to push that vote past Election Day and if Biden were to win in a landslide, I doubt the numbers would look the same on November 4. Some chunk of the public would shift to the view that the new president had just been given a major mandate at a moment when there’s still a vacancy on the Court and therefore he should get to fill it. Senate Republicans wouldn’t care, I suspect — why would they when they wouldn’t need to face voters again for two years? — but the politics may be different then than now.

Second, although the public supports Barrett’s confirmation on balance, that doesn’t mean this issue is necessarily a winner for the GOP. We’re all familiar with gun-control polls that show 90 percent of the public supports universal background checks, yet Congress never gets around to passing a bill to make universal background checks the law. Why not? Because the 10 percent that opposes the idea opposes it vehemently, and they’re willing and able to punish Republican politicians who cross them. The same may be true with the Barrett confirmation. A plurality of the public is fine with it, but the insane amounts of money that Democratic candidates have raised over the past three weeks since Ginsburg died prove that some lefties oppose letting Trump fill the seat vehemently. What that means for turnout on Election Day, I don’t know. But Cook notes that Harrison has received such a ludicrous windfall of contributions from donors that he’s outspent Graham, a well-connected incumbent, three to one on TV and digital ads — $60 million versus $20 million. And that advantage may yet grow in the four weeks left before the vote.

In lieu of an exit question, read Michael Brendan Dougherty on the double disservice done to Barrett by Trump in rolling out her nomination. It’s not just that she made her debut at an apparent superspreader event caused by Whit House negligence. It’s that Trump continually talks about the need for confirming a ninth justice before the election so that she can cast the deciding vote in any ballot disputes. Democrats are destined to grill her about that at her hearing, notes Dougherty, and there’s really no good response for her to give. Exit quotation: “If her answers make it sound like she is against recusal, she will be portrayed as corrupt. If her answers make it sound like she is pre-committing to recusal, it will shake Republicans up.”

AP: Many of those President Trump portrays as violent left-wing radicals are young suburban adults 'caught up in the moment'

Say what? Moderator will mute mics in next presidential debate