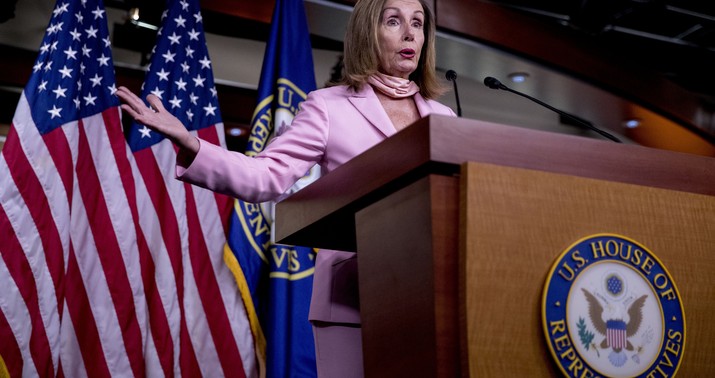 Stop me if you’ve heard this before. Nancy Pelosi hopeful a deal is near! Congress really wants Phase 4 before the election! The check will be in the mail!

Both CNN and CNBC think progress is being made on a Phase 4 relief bill, but. Last night, Nancy Pelosi released a new $2.2 trillion proposal, a slight trim off of her earlier $2.5 trillion proposal but still far off from the Senate GOP’s $1 trillion cap. Meanwhile, Pelosi continues to talk with Treasury Secretary Steve Mnuchin, hoping to get the White House to pressure Senate Republicans to loosen up the pursestrings.

Last night’s unveiling of the latest House package had been previewed at CNBC earlier in the evening:

CNN’s Manu Raju followed up this morning on the “one final time” of attempts to break the logjam soon enough to pass an aid package ahead of the election:

House Speaker Nancy Pelosi and Treasury Secretary Steven Mnuchin, who have cut several major deals during the coronavirus pandemic, are trying one final time to ease a bitter standoff on Capitol Hill over a pre-Election Day package to provide relief to millions of Americans reeling from the damaging economic crisis.

Pelosi and Mnuchin have spoken several times in recent days, including Monday night and plan to again on Tuesday. And while most on Capitol Hill are deeply skeptical a deal can be reached, both Pelosi and Mnuchin have aligned interests: The speaker is facing growing pressure from vulnerable House Democrats, particularly freshmen, to cut a deal immediately while President Donald Trump wants a legislative accomplishment to tout in the final weeks of the intensely fought campaign.

But the House speaker has made contingency plans in case the effort falls apart: She and her top lieutenants on Monday night unveiled a $2.2 trillion plan, down from the $3.4 trillion measure that passed the House largely along party lines in May and has since been ignored by the GOP-led Senate.

That price tag for the bill is still far too high for the White House and Senate Republicans, who tried to advance a $500 billion plan this month that was blocked by Democrats over concerns it didn’t go far enough.

So what’s in the new House plan? Most of what was in the old House plan, but with a significant cut to the bloc-grant program for state and local governments:

The new legislation would:

The bloc grant level is well above what the White House wants ($150B), and the Senate doesn’t want to fund it at all. They would prefer to fund only programs that specifically target COVID-19 efforts, including some money to assist schools but only if they use it to reopen. The width of the gaps isn’t just on the overall price tag, and they don’t appear to be closing much either.

Nevertheless, Pelosi declared herself “hopeful” for a deal this week after a meeting this morning with Mnuchin:

“I’m hopeful,” Pelosi told reporters who asked whether agreement on additional coronavirus relief could be reached this week. Her discussion with Mnuchin on Tuesday was their third conversation in as many days.

“The two went over the provisions of the updated Heroes Act and agreed to speak again tomorrow,” Pelosi spokesman Drew Hammill said on Twitter, referring to a $2.2 trillion measure unveiled on Monday by House Democrats.

In an interview with CNBC, White House economic adviser Larry Kudlow made clear that the White House still views the $2.2 trillion figure as too high.

“There are things, I think, that both sides agree with but then the other team wants a gigantic package and we don’t think we need that,” he said.

White House Chief of Staff Mark Meadows has previously said that President Donald Trump would be willing to sign a $1.3 trillion measure. Meadows on Tuesday said he was in touch with Mnuchin and Trump on the matter.

Apparently, the only agreement made was to keep talking:

Speaker Pelosi and Secretary Mnuchin spoke this morning by phone at 9:30 a.m. for approximately 50 minutes. The two went over the provisions of the updated Heroes Act and agreed to speak again tomorrow.

What happened to the plan from the Problem Solvers Caucus? That proposal split the baby rather neatly between the three entities negotiating for a new relief package. It has 50 signatories, split evenly between Democrats and Republicans, which means it might succeed in winning a vote through a discharge petition. Pelosi wants Democrats to hold off, though, betting that she can wring more concessions from Republicans than the Problem Solvers did — or successfully place the blame for failure on the GOP.

If Pelosi pushes this to a floor vote this week, it’s over, warns Ryan Derousseau at Forbes:

If you see a House vote this week, consider it a death knell for any compromise before the election.

Vulnerable Democrats, particularly freshman legislators, want a vote on the stimulus package as a way to show their base that they’re working to fund aid. It’s not dissimilar to the efforts by the GOP-controlled Senate last month to try and bring a much slimmer stimulus package to vote on the floor.

Pelosi is up against a wall, since the House will recess at the end of the week to allow for the final month of campaigning. Pelosi has said she would call back representatives, if a deal is struck during the final month before the election. If it’s clear a deal won’t come, then she very well could call a vote on the $2.2 trillion package to appease the vulnerable representatives.

If that happens this week, and the House moves forward on the bill, then it means negotiation efforts have failed, reports CNN.

With so little time before the election, it will likely be the end of serious discussions until after November 3.

Maybe, but don’t count out the discharge petition as a late possibility after a floor vote. House freshman need a deal, and centrists might be angry over Pelosi’s attempt to play hardball rather than work with them on a reasonable middle ground. The White House has already signaled that it could support the Problem Solvers’ approach. If a discharge petition succeeds in forcing a floor vote, Pelosi’s toast — and everyone will know it. That might force her to come a lot closer to Mnuchin and Kudlow than the other way around.