California gov: We interrupt your rolling blackouts to announce ban on gas-powered car sales by 2035 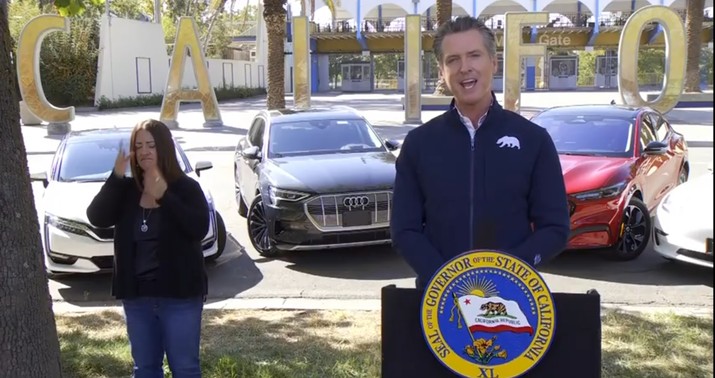 A month ago, California couldn’t generate enough energy to keep homes powered on a consistent basis, as the state’s mandates for “green energy” resources left their grid short. Today, Gov. Gavin Newsom committed to adding millions of vehicles to the grid’s load by 2035. “Of all the simultaneous crises that we face as a state and,” Gavin declared when signing an EO to ban the sale of gasoline-powered cars in the state over the next fifteen years, “I’d argue as a nation – for that matter from a global perspective – none is more important, none is more forceful than the issue of the climate crisis.”

Some Californians might have had to wait for the power to come back on later to hear the news, of course:

California Gov. Gavin Newsom signed an executive order Wednesday that will ban the sale of new gasoline-powered cars and other passenger vehicles in the state by 2035. The move was among a number of actions the Democratic governor announced aimed at slashing the state’s greenhouse gas emissions and other pollution.

The executive order will not prevent Californians from owning gasoline-powered cars or selling them on the used car market, according to the state.

True, but the 2035 ban will force auto manufacturers to start selling more electric vehicles now in order to build enough of a customer base to get the support infrastructure in place. That’s not just outlets in homes and public places, but also building service networks, training more mechanics, and getting spare parts in place to keep the vehicles running. That can’t be developed overnight — it will take years to put those in place in sufficient quantity to succeed.

In other words, California won’t have fifteen years to add more supply to the grid to meet that demand all at once. More and more vehicles will get added to the grid for power replenishing starting in the next few years. That will add to the demand that California can’t meet at its present levels of supply, with the shortages forcing the state into serious rationing in the form of rolling blackouts.

Of course, last month’s embarrassing blackouts did give state regulators a brief moment of sanity two weeks ago. They extended the operation of natural-gas power generation past a previous mandated shutdown scheduled at the end of this year, which actually only means they won’t cut supply, not add to it. With the addition of new demand, will California look for new ways to add reliable supply, especially from cleaner fossil-fuel sources that can be found in abundance now?

Hydraulic fracturing, a method of oil and gas extraction known as fracking, could also end be on the Golden State’s chopping block. Newsom said he is working with the California Legislature to ban the practice by 2024. The order also aims to create new health and safety regulations “that protect workers and communities from the impacts of oil extraction.”

So far, all it’s meant is that the state has protected its residents from their appliances, air conditioning, and lighting on an arbitrary basis. Newsom wants to cut supply at the same time he wants to mandate more demand, which isn’t going to work out well for “workers and communities.” It means workers will have more and more trouble getting to work, while communities have less and less time when commerce can be reliably conducted. Even for those who can work from home, the grid’s reliability and the general lack of back-up power options that might be available in commercial space makes for an unstable economic climate.

A couple of weeks ago, it seemed that California’s leadership had grudgingly acknowledged the gap between utopian Green-New-Deal thinking and hard reality. And just wait until the state starts dealing with all of the environmental problems that will arise from battery disposal as vehicle power storages ages out.