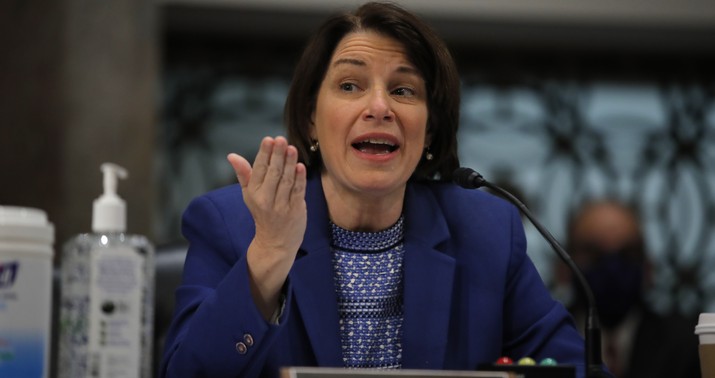 Which argument is more compelling in favor of holding a confirmation vote for Donald Trump’s Supreme Court pick — the one from a Never Trump conservative, or from a Senate Democrat? Only one is intentional, but they are both essentially the same argument.

Let’s kick this off with some irony first. Senator Amy Klobuchar tried to argue against the idea last night, but booted it spectacularly:

Yes indeed, that’s exactly what happens … and exactly what will happen at the end of the week. The people picked a president, and he’s in office until January 20. Since the opening took place before then, the current president picks the replacement, as Trump will do on Friday or Saturday … with four months left in his term in office.

Klobuchar tried to clean up the argument:

People are voting RIGHT NOW to pick our president — that president should pick the next Supreme Court Justice.

People are voting “RIGHT NOW” to pick our next president, not the current president. They’re voting for the person they want to fill Supreme Court openings during that person’s term in office … which starts on January 20. Now, the Senate can refuse to consider that choice until after the election (or ever) if a majority decides it doesn’t want to proceed with it, which is what happened in 2016 (along with a lot of hypocritical blathering from all sides, then and now). But there’s nothing at all unusual about a president picking a replacement Supreme Court justice; in fact, that’s truly “how it works,” constitutionally speaking, as Klobuchar stumbles into admitting.

That brings us to Matt Lewis’ argument from his Never Trump-conservative perspective at The Daily Beast.  Perhaps this cohort wants to deny Trump any opportunity for a win, Lewis says with some sympathy, but in this case they’re hardly acting as principled conservatives. Not only should they desire the kind of jurists Trump is likely to nominate, they should recognize that this is an entirely legitimate exercise of authority by both Trump and Senate Republicans:

If you are a conservative, then you should support the kinds of judges Trump is likely to nominate. Here, I’m talking about Amy Coney Barrett and Barbara Lagoa. These are highly qualified judges that Mitt Romney or Marco Rubio might have nominated. So if you don’t support them now, it might mean that you’ve changed. This is fine, but then you might want to drop the “conservative” part from your résumé. While Democrats will surely scaremonger whomever Trump nominates, it’s not like Republican-nominated judges get on the Court and start taking crazy right-wing positions. Indeed, it’s fair to criticize them for disappointing conservatives too often. …

Another possible rationale for opposing this is the assumption that Republicans are doing something that is egregious, and that it will lead to us spiraling out of control. I just disagree with the premise that Republicans are doing something weird or outrageous. A vacancy occurred, and the sitting president is going to try to nominate a replacement. That’s it. As I explained in my previous column, a duly elected president has the right to make a nomination, and duly elected senators have the right to confirm (or not) his nominee.

As for Democrats’ threats to escalate this fight unless Senate Republicans back down, Lewis argues that’s how we got Trump in the first place:

Just as a baseball team’s fans might rightly be angry and disenchanted if their ball club started throwing games, conservative voters have every right to expect that the people they elected will at least try to defend their values and advance their beliefs.

It is demoralizing for people to work hard in the political process only to see the establishment elites abandon the fight to avoid trouble. This is one of the reasons we got Trump—there was at least a perception that conservative elites kept losing because they were too soft. I’m not sure that was valid, but backing down on something of this magnitude would only confirm this perception.

That would be especially true if the retreat was from a legitimate constitutional authority granted to the president and the Senate, all to avoid a temper tantrum from Democrats. A temper tantrum is how Democrats got here in the first place, after all. After using minoritarian tactics to block George Bush’s appellate-circuit appointments, Harry Reid and Chuck Schumer retaliated when Mitch McConnell did the same to Barack Obama’s. They set a new precedent for changing rules mid-session and eliminated the filibuster for all presidential appointments except for the Supreme Court. When Schumer threatened to use the filibuster on Neil Gorsuch, McConnell used the Reid-Schumer precedent to eliminate minoritarian tactics altogether.

In fact, one has to wonder whether we would have three openings on the Supreme Court at this moment had McConnell not given Schumer a dose of his own medicine in 2017.

At any rate, it’s easy to get distracted by all the hypocrisy on both sides. Lewis cuts to the heart of the argument intentionally by noting its normality, while Klobuchar fumbled her way to the truth … even if she likely still doesn’t recognize it. A Supreme Court opening has emerged, and the current president and Senate have the authority and arguably the responsibility to deal with it. Elections have consequences — the elections that chose the current officeholders, that is.