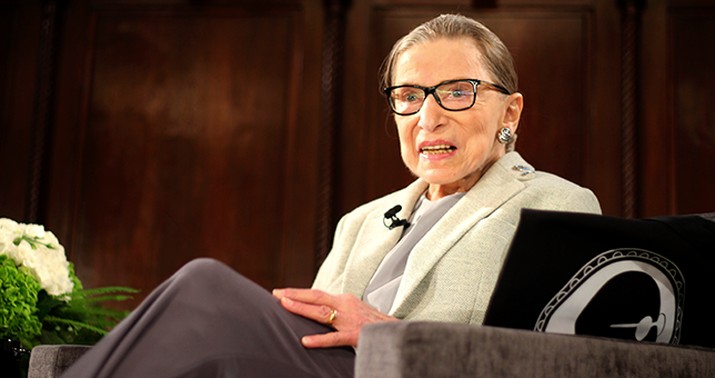 The political shocks will come soon enough. For now, though, it’s the time to mark an end of an era. Supreme Court Associate Justice Ruth Bader Ginsburg passed away today after 27 years on the court, and after a long and tough fight with pancreatic cancer:

Justice Ruth Bader Ginsburg, the demure firebrand who in her 80s became a legal, cultural and feminist icon, died Friday. The Supreme Court announced her death, saying the cause was complications from metastatic cancer of the pancreas.

The court, in a statement, said Ginsburg died at her home in Washington surrounded by family. She was 87.

“Our nation has lost a justice of historic stature,” Chief Justice John Roberts said. “We at the Supreme Court have lost a cherished colleague. Today we mourn but with confidence that future generations will remember Ruth Bader Ginsburg as we knew her, a tired and resolute champion of justice.”

Regardless of her ideology and approach, Ginsburg devoted her life to public service. That kind of dedication to the law and its application should be, and will be, recalled with respect and gratitude. We have had lots of reasons and occasions to disagree with her, but Ginsburg is now beyond those issues, and so should we be, too. Our condolences, prayers, and best wishes go out to her family, friends, and admirers for their loss.

There will be plenty of retrospectives on her life and career, of course. Some are already being published now, as media outlets had plenty of time to prepare for this moment. Ginsburg seemed rather indestructible, though; as Jazz wrote on Twitter, it almost seemed like she would live forever:

RIP Notorious RBG. Honestly shocked. Thought she would be going like the Energizer Bunny. Long career of service.

However, her death creates a unique political issue at a critical time. It’s not too soon to discuss that, as even Ginsburg herself recognized shortly before her death:

Just days before her death, as her strength waned, Ginsburg dictated this statement to her granddaughter Clara Spera: “My most fervent wish is that I will not be replaced until a new president is installed.”

She knew what was to come. Ginsburg’s death will have profound consequences for the court and the country. Inside the court, not only is the leader of the liberal wing gone, but with the Court about to open a new term, Chief Justice John Roberts no longer holds the controlling vote in closely contested cases.

That would depend greatly on who wins the election. This seat won’t sit open for four years, after all, nor would Ginsburg have expected that. Interestingly enough, Hugh Hewitt asked Donald Trump about what he planned to do in case of a vacancy just a month ago:

I asked @realDonaldTrump about a #SCOTUS vacancy on 8/11: pic.twitter.com/RiSvfm408B

It’s possible that Trump could just pick a name off of his list in the next few days, but that’s as far as it will go.  Amy Coney Barrett seems to be the most likely candidate, under the circumstances, and she has been relatively recently vetted for the appellate court. However, there’s almost no time left for a candidate to come up for a vote before the election. There’s only six weeks to go before Election Day, and few of those days will have senators around to conduct business. Lindsey Graham probably can’t even arrange a confirmation hearing in the Judiciary Committee that fast, let alone pass a nominee to the full floor.

What’s more likely to happen will be that Trump’s selection will end up being a major issue in the election — perhaps the major issue now. It will remind voters in both parties of the stakes involved in presidential elections, but will it change the turnout models? I’d guess that Republicans are already pretty motivated, and Democrats for whom this is critical probably would be, too. This probably isn’t that much of a game-changer in that sense, but it might convince some previous Trump voters who have been disillusioned to come back to the fold for this issue.

The big question will be whether the Senate will confirm a Trump appointee after the election if he loses to Biden. Would Mitch McConnell escalate the judiciary wars with that kind of maneuver? I’d guess that he’d try, but don’t expect all 53 Republican senators to go along. Susan Collins and Lisa Murkowski would absolutely balk, which means McConnell would have only one more vote to lose. The meltdown that would follow would likely cow more than one other Republican to quail at the prospect, especially in the class that has to defend their seats in 2022. The most likely outcome is that either Trump wins or Biden gets to choose.

Update: Murkowski’s already out in front of this

NEW: Lisa Murkowski (R-AK) announces she will NOT vote to replace RBG on SCOTUS until after Election Day. "Fair is fair," she says.

As I wrote, there’s really not enough time on the legislative calendar for that. The big question really is whether Republicans would confirm a SCOTUS appointment from a president who lost an election in a lame-duck session. All the talk about precedents will get a big test over the next few weeks — unless voters moot it in the election.

Update: It didn’t take long for Collins to stake out the same position, and also add that she’s opposed to a lame-duck confirmation too:

News: @SenatorCollins told me earlier this month in Maine that she would not seat a Supreme Court justice in October.

“I think that’s too close, I really do,” she said.

She said she’d also oppose seating a justice in the lame duck if there’s a change in presidents.

Update: That’s probably an end to the before-the-election question:

Again, none of this stops Trump from nominating a replacement. But whoever it is should be prepared for a s***storm of personal attacks over the next few weeks. That’s something Trump and his team should keep in mind while calculating their next moves.

Update; More of an aside, actually, from friends on Twitter. Does anyone expect Mitt Romney to go for a pre-election vote? Naah. McConnell doesn’t have a prayer of moving forward before Election Day.

Update: Let’s chalk this up to sunny optimism:

We’ll see, but I wouldn’t count on it before Election Day. However, this could be taken to apply to a lame-duck appointment, too.

Update: This one’s a bit of a surprise:

McSally indicates that the Senate should vote on Trump's SCOTUS nominee

Maybe she figures that the MAGA vote in Arizona is more important than the centrist-crossover vote. She may be right, too. Not sure the calculus will be the same in bluer Colorado for Gardner, though.

Update: Can Republicans sell the idea that the election will require a full bench in place?

From my notebook/calls over the past hour: there are discussions within the Senate GOP about voting *before* the election, making the argument that 9 justices are needed in case of an election crisis. But Rs who want that aren't sure if Collins/Murkowski would fight it.

Eh, I’m not sure this makes sense. Right now conservatives have a 5-3 majority with Ginsburg’s passing, at least nominally. Adding another conservative would not improve matters for the liberal wing, so they won’t have any reason to buy into this argument. And Roberts would probably try hard to avoid 4-4 splits now, so Republicans don’t really need it anyway.

Update: The election argument has another defect, too:

In that case, the nomination of Merrick Garland threatened to create a 5-4 liberal tilt. Republicans blocked that for obvious reasons, but it did leave a 4-4 ideological split that was more likely to deadlock if the court had to deal with any election challenges. It didn’t bother Republicans at that time, or at least not publicly.