Politico: The COVID decline is real — and could be spectacular for Trump 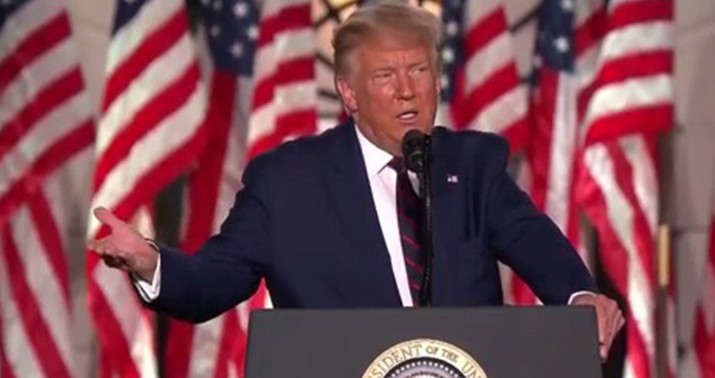 The good news, according to Politico: Progress against COVID-19 transmission has been made. After a summer of spikes, national infection rates have finally reversed again. So too have hospitalizations and deaths, and since the latter is a lagging indicator, we can expect to see it drop more dramatically over the next few weeks.

The bad news, according to Politico: The success might lead the Trump administration to double down on reopening. Dan Goldberg sees this indicated in the way Donald Trump and the RNC are campaigning, and not just on the pandemic issue alone:

Coronavirus infections are down in nearly every state. That could either give President Donald Trump just what he needs to prime his reelection odds or become another missed opportunity to capitalize on a lull during the pandemic.

The positive trends are real. Covid-19 cases have been falling since late July, including in several battleground states. Hospitalizations have dropped 37 percent in the last month and the daily death count is leveling off.

But that doesn’t mean the pandemic is over, even if Trump and his team portray it that way.

Are they portraying it as over? Not really, although Goldberg has something of a point on testing and the White House messaging on that issue. It’s a bit mystifying why Trump keeps insisting on pushing testing as a win when it’s been an Achilles heel for months. Testing capacities in the states have been uneven and the timing of results has been too long to be useful in many situations. Those issues are slowly being resolved, but it has taken too long and we are still not where we need to be with reliable and fast antigen testing — and nowhere near that with antibody testing, which still remains relatively useless.

However, we clearly are making some progress, and on a broader scale than before. Goldberg points to Trump’s decision to accept the nomination with a live audience on the South Lawn as an indicator of fantasy thinking, but …

Trump hasn’t been inclined to go that route, instead pressing states to reopen and slowing down testing. In his closing speech at the Republican National Convention Thursday night. the president said it was time for Americans to return to work and school, and called on Democratic governors to open their states.

And holding the event on the White House’s South Lawn with a boisterous crowd of about 1,500, only a few of whom were wearing masks, signaled that the threat was over, it’s time to get on with life.

Ahem. What Goldberg fails to mention is that the South Lawn audience was seated with some distancing between them — and on the other side of the building, a massive BLM/defund-the-police protest had assembled without any social distancing at all. Which side of the White House signaled more that the COVID-19 threat wasn’t serious? How many cities feature riots and protests with nowhere near the nominal distancing seen on the South Lawn? If any spikes come out of Thursday night in DC, I know which side of the building I’d bet produces it.

Trump is pressing to reopen for good reasons — to save businesses that will otherwise fold. That kind of economic destruction will only fan the flames of anger and rioting that already have gotten out of hand in places like Portland, Minneapolis, and Kenosha. It sets off a vicious cycle of despair and decline, one that can’t be held at bay forever by government handouts. Eventually, as New York City is presently discovering, you run out of cash when businesses can’t operate.

The point of the initial shutdown was to flatten curves, not to stop the virus from transmission entirely, which is impossible on this scale. That largely worked, but unevenly and more regionally than nationally. The US is a vast country, and the virus did not hit every region at the same time. The so-called “second wave” to which Goldberg refers is largely a regional phenomenon of a first wave in regions that didn’t include New York, New Jersey, DC, and California. We might still see upticks in other regions as they deal with first-time spikes, but most of the US has seen their first wave already now. Thanks to the build-up of supplies and health-care capacity along with better treatment methods, we should see lower transmission rates and better morbidity rates for the next few months — at least until winter hits. Hopefully an effective and safe vaccine will emerge before then, but don’t be surprised if the pandemic doesn’t get a boost in the winter weather, although that will likely be after the election, not before it.

Can Trump overplay his COVID-19 hand? Yes, and to some extent he’s repeatedly done so by making foolish predictions and ridiculously sunny claims about his administration’s progress. There are reasons to believe that the worst may be behind us, but it doesn’t mean that the disease and its dangers are behind us yet. Voters are still more worried about COVID-19 than the economy, and if the Trump campaign doesn’t address that more seriously, then the real danger is the disconnect that will open up between Trump and the voters he needs for re-election.

The Morning Briefing: Who Had 'Lil Wayne Chillin' With Trump' On Their 2020 Bingo Cards?