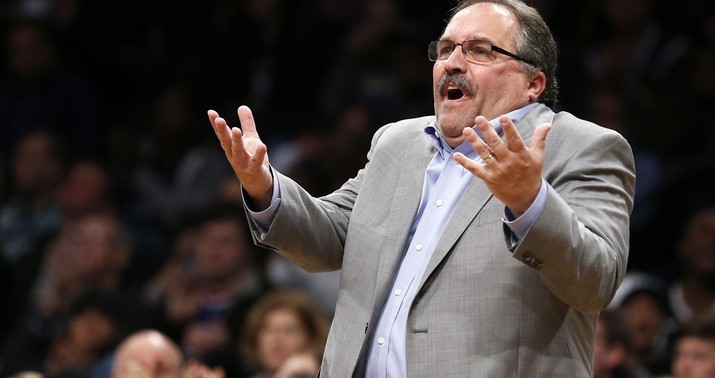 Perhaps NBA figures should just shut up about politics and human-rights abuses entirely, especially after the league’s partnership in exploiting and abusing children in Xinjiang concentration, er, training camps. Instead, NBA-TV and TNT analyst Stan Van Gundy advises Americans to shut up about China’s ongoing atrocities because history ‘n stuff, or something. This all started with a derisive column from the Orlando Sentinel’s David Whitley yesterday, in which he marveled at China’s ability to do what Laura Ingraham only dreamed of — getting the NBA to “shut up and dribble”:

Amid all the preaching, would someone make a peep about a country that commits more human rights abuses in 10 minutes than the U.S. does in 10 years?

Don’t press your ears against the NBA’s bubble waiting for an answer.

The league officially declared it has no soul in October, when Houston general manager Daryl Morey sent one measly tweet supporting the democracy protests in Hong Kong.

The Chinese Communist Party started pulling NBA games off TV and merchandise off shelves. With its multibillion-dollar relationship threatened, the NBA quickly bowed in subservience and sent Morey to re-education camp.

Since then, the NBA has stayed mum as China ransacked all rights in Hong Kong, unleashed COVID-19 on the world and herded countless more Uighur Muslims onto trains bound for slave labor camps.

Somewhere, Laura Ingraham must be cackling.

Van Gundy took exception to Whitley’s accusations of hypocrisy and corruption in the midst of its “social justice festival” this season. The TNT and NBATV analyst then made it pretty clear just how far NBA figures were prepared to go in maintaining both:

We committed genocide against Native Americans. We have enslaved, lynched, segregated and incarcerated blacks over 400 years. Women couldn’t vote for 140 years. Using abuses elsewhere to try to distract from our own poor record on human rights is dishonest https://t.co/3TyPJrbZPA

If that’s the standard, then the NBA’s involvement in Xinjiang should keep every single one of its employees silenced for the next 400 years or so. After all, their partnership in the physical abuse of children in Xinjiang — not to mention collaboration with a genocidal regime just a stone’s throw away from its concentration camps — is still ongoing. And their obsequiousness to Beijing in shutting down any in-league criticism of China’s policies makes Marshal Petain look positively patriotic.

Steve Kerr on if he's ever been asked about human rights during his previous trips to China:

"No. Nor has (America's) record of human rights abuses come up either… People in China didn't ask me about, you know, people owning AR-15s and mowing each other down in a mall." pic.twitter.com/56mNC7LmID

If Van Gundy set out to prove Whitley’s argument, he could hardly have done a better job.

Our pal and colleague Guy Benson was merciless in his response:

I wonder how Stan’s galaxy brain would grapple with the question of whether Americans were right to fight the Nazis, or express horror at the Holocaust. Our major civil rights laws were still years away at the time, after all. Too flawed to ‘cast stones’ or whatever?

I’d guess that “galaxy brain” is not an accurate description of Van Gundy’s intellectual power. Neither is it an indication of his integrity. It does, however, show that China didn’t really have to exert much effort into getting the league to knuckle under to its economic power, or to get social-justice hypocrites to defend Beijing, of all regimes. “Shut up and dribble” started off as an insult, has transformed into the status quo, and it might end up being very good advice for the future.