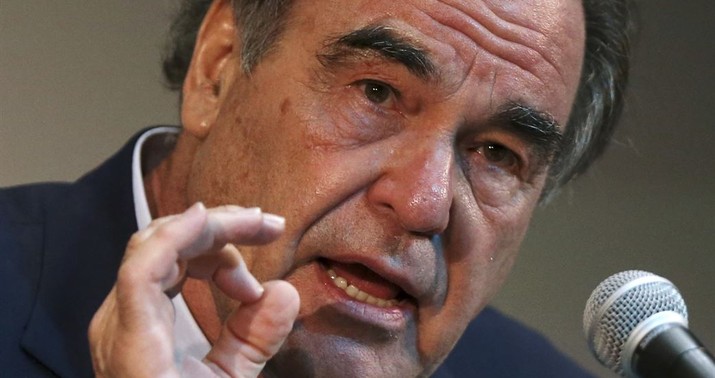 No kidding! When Mr. Conspiracy Theory can’t make a major studio film due to “politically correct [expletive],” you know the industry has run off the rails. Oliver Stone spoke with the New York Times late last week about the difficulties of working in Hollywood, and why he hasn’t done a major film in years. Stone told David Marchese that his main complaint is with studios’ marketing efforts, which have taken over all other considerations in filmmaking.

However, Stone also said that an “Alice in Wonderland” environment has emerged, in which political correctness keeps morphing and contradicting itself:

You had about a 10-year period, starting with “Salvador” and “Platoon” and going up to “Natural Born Killers” or “Nixon,” when your films felt like these major statements on the country and the culture. When that zeitgeist-y period ended, which it inevitably does for artists, did it change how you approached your work? I recognize the impact I had, but at the same time I enjoyed doing the films I did afterward. In 1999 I did “Any Given Sunday.” I get so much attention for that. “World Trade Center” was one of my most successful films financially. So the parade continued. The problem is in Hollywood. It’s just so expensive — the marketing. Everything has become too fragile, too sensitive. Hollywood now — you can’t make a film without a Covid adviser. You can’t make a film without a sensitivity counselor. It’s ridiculous.

Why is that ridiculous? The Academy changes its mind every five, 10, two months about what it’s trying to keep up with. It’s politically correct [expletive], and it’s not a world I’m anxious to run out into. I’ve never seen it quite mad like this. It’s like an “Alice in Wonderland” tea party.

Mediaite picked up on the “fragility” quote late yesterday, which seems perfectly positioned to combat the cancel-culture frenzy of late — and not just in Hollywood. Stone himself might not volunteer as a combatant in that platoon, however. Sensing that Marchese had taken this too much as his issue, Stone tried to walk it back immediately:

In what respect? Oh, David, don’t go there. That’s going to be your headline. You know, I just read something about how films are going to be very expensive to make now, because you need to take all these precautions, and a 50-day shoot becomes a 60-day shoot, and social distancing for actors. That’s what I’m talking about.

The rest of the interview contains some fascinating exchanges between Stone and Marchese, especially on his recent documentary on Russia. Marchese wondered whether Stone had considered why Vladimir Putin showed so much interest in working with him. Did Stone act as a “useful idiot”? Stone bristled at the suggestion, and ended up half-defending Donald Trump on the Russia-collusion conspiracy theory:

Putin is obviously a canny politician. What do you suspect he believed he had to gain by talking with you? I think his intention, as he forthrightly says again and again in the documentary, was: Let’s talk. Let’s be mature. Let’s be adults in the room.

Could it have been something else maybe? There’s that term “the useful idiot.” First of all, you should just look at the documentary.

I’ve seen it. Where is it clear that I’m an idiot? I think it’s a very articulate dialogue. I would also point out that when we started, which was in 2014 roughly, the relationship with the United States was not as bad as it would become. Things got much worse. In 2017, we went back to him, and you have on the record what he says about Donald Trump and the American election. I don’t think Russia has the desire or the money to spend on “destabilizing” an entire election. And how can you even compare it to what we’ve done in other countries?

But two evils don’t have to be equal for them to both be evil. We’re getting too much onto Putin. That’s not in this book.

Stone isn’t the only one speaking out about cancel culture in the entertainment industry. Comedian and actor Ricky Gervais calls it a “new weird sort of fascism,” and says that even The Office probably couldn’t get made with the BBC now. The discussion starts around the nine-minute mark, before which Gervais vents about American attitudes on health care that show he’s not exactly a conservative. Unlike the New York Times, however, Gervais prefers a robust debate over the “outrage mobs”:

“There’s this new weird sort of fascism of people thinking they know what you can say and what you can’t and it’s a really weird thing… that there’s this new trendy myth that people who want free speech want to say awful things all the time. It’s just isn’t true, it protects everyone,” Gervais said.

“If you’re mildly left-wing on Twitter, you’re suddenly Trotsky, right? If your mildly conservative, if you’re Hitler and if your centrist and you look at both arguments, you’re a coward,” he continued.

Ricky Gervais is an avid freedom of speech supporter, and though he supports some curtailments of it in the form of libel and slander laws, he ultimately cautioned against the criminalization of speech that some people might find offensive.

Someone should paint that quote in the street in front of A.G. Sulzberger’s office.