Today’s guessing game: What will the new Washington Redskins name be? 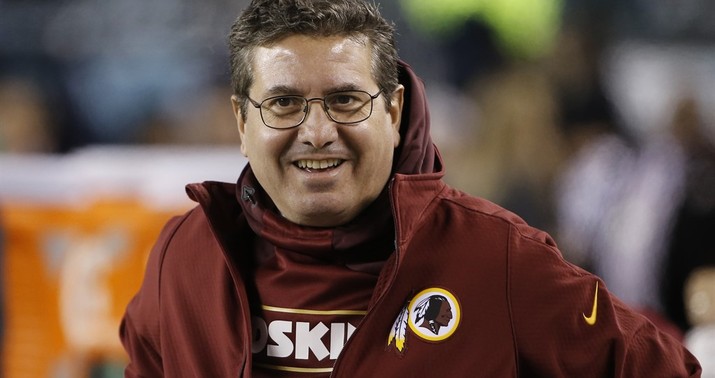 To quote an old joke, the NFL’s team in the nation’s capital has suddenly discovered that their name is offensive. The new name will be … the DC Redskins. The announcement on July 3rd that team owner Dan Snyder had begun a “thorough review” of the team’s name only meant one thing, and today Snyder will make it official — the Redskins name is history.

What will replace it? Your guess is as good as anyone’s. They have apparently stumbled into a Lady Antebellum conundrum:

The Washington Redskins plan to announce Monday morning that they will change their team name, three people with knowledge of the situation confirmed Sunday night. The team is not expected to reveal a new name until a later date.

Monday’s anticipated announcement comes after the organization released a statement July 3 saying it would be undertaking what it called a “thorough review” of the team’s name; multiple people familiar with the process have said that it would result in the name being changed. In an interview July 4, Coach Ron Rivera — who is working with owner Daniel Snyder to choose a name — said he hoped the new name would be in place by the start of the 2020 NFL season. Others have said it will be revealed as soon as within two weeks.

Two people with knowledge of the team’s plans said Sunday that the preferred replacement name is tied up in a trademark fight, which is why the team can’t announce the new name Monday.

At least Snyder didn’t wait until after announcing the change to do a little research. He managed to avoid that kind of faceplant, anyway, but this is still pretty strange. Snyder wants to get credit for changing the name now, even though he still doesn’t have a replacement. He’s trading the Redskins brand for a team name to be named later, or something.

I tell you, the lawsuit to strip the Globetrotters name from the people using it now will be lit.

Unlike the Lady A**holes, Snyder didn’t really have any choice. The term “redskin” was undeniable used in a derogatory fashion, even if — as Snyder claims — it was also used in a non-derogatory fashion, too. His sponsors and his merchandising  partners all refused to work with the name any longer. Snyder has enough money to where he could sustain massive losses without those revenue streams for a while, but who wants to sustain massive losses? The problem is that Snyder needs a new name for the merchandise, and he needs one fast.

So what’s the hold-up? Snyder had already trademarked Washington Warriors, a name that would allow them to continue the Native American motif.  Another idea was to call the team the Redtails, the nickname of the famed WWII Tuskegee Airmen:

If Washington is to change its franchise name (it should), then team should follow @petemrogers’ design pic.twitter.com/GPsWFgy6DB

That seems to be one of the choices, if you read between the WaPo’s lines:

In the July 4 interview, Rivera said he and Snyder had come up with two names that Rivera really liked. He did not reveal the names but said he wanted to confer with Native American and military organizations to make sure that the new name properly honored both.

That could apply to the name Warriors, but perhaps not the Redtails, which has no Native American reference. However, Native American groups that objected to Redskins also objected to any other reference, so that seems unlikely to fly. Snyder wouldn’t have a trademark issue with that name either, so if he can’t reveal it now, Warriors is probably not the first choice.

Perhaps Snyder should consider something more reflective of the culture of his home rather than appropriating symbology from others. The Washington Swamp Rats has a ring to it, no? How about the Washington Graft? True, they’d have to petition the league for a color change to green, but at least no one would object to any cultural appropriation. The Washington Gridlock works too, as a play off gridiron, and also as a great description of their offense.

What’s the best way to launch the new brand, whatever they choose? Maybe they could have the Lady A**holes sing the national anthem. That’s a move that could only make both more popular than they are at the moment.