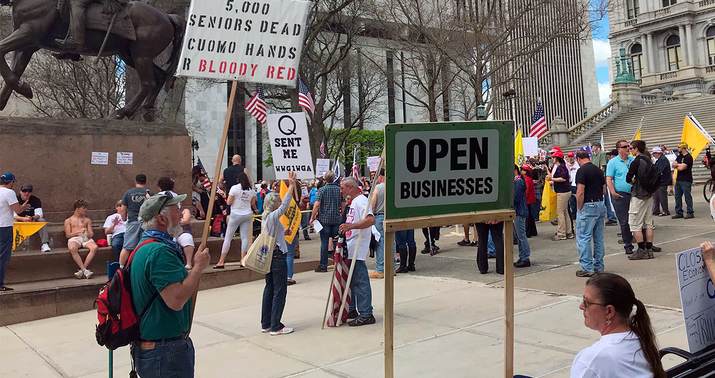 Don’t get too comfy yet, but it looks like the May jobs report wasn’t a fluke. The US economy added almost twice as many jobs in June as it did the month before, according to the new jobs report from the Bureau of Labor Statistics. The unemployment rate fell two full points as 4.8 million jobs got created, but the enduring high rate of weekly jobless claims will put a damper on any celebrations.

However, it does appear that the riots and unrest did not derail the economic recovery. What about the new spikes in COVID-19? It might be too early to tell:

Total nonfarm payroll employment rose by 4.8 million in June, and the unemployment rate declined to 11.1 percent, the U.S. Bureau of Labor Statistics reported today. These improvements in the labor market reflected the continued resumption of economic activity that had been curtailed in March and April due to the coronavirus (COVID-19) pandemic and efforts to contain it. In June, employment in leisure and hospitality rose sharply. Notable job gains also occurred in retail trade, education and health services, other services, manufacturing, and professional and business services. …

The decline in unemployed persons is especially encouraging, and even more so when seen in the context of labor-force calculations. According to the Household data, 1.7 million people joined the labor force, part of a return to normalcy for many Americans. The labor force participation rate shot up 0.7 points to 61.5%, and the employment-population ratio went up 1.8 points to 54.6%. That indicates more confidence in the jobs markets and the economy, or at least it did in mid-June when the survey was conducted.

Let’s stick with the good news for now, however. Unemployment rates fell in every demographic as the bounty was widely shared. Teenagers had the biggest rebound, with their unemployment rate falling 6.7 points since May. Black unemployment only fell 1.4 points, however, although Hispanic unemployment fell 3.1 points.

The Establishment survey mainly lines up with the Household survey on jobs gained in June. The gains were nearly across the board, with only small declines in mining/logging and utilities showing negatives. Manufacturing added 356,000 jobs in June as factories went back to work, but the biggest gain was in leisure and hospitality services, adding slightly more than two million employees. Wages fell back 1.1% and hours dropped slightly too, likely an indication that the returning jobs tend toward lower-income positions — which were the first to get torched in the shutdowns.

Now for the not-so-good news, or at least context. These surveys got conducted mid-month before COVID-19 spikes, which means this report didn’t capture the impact of new business restrictions imposed later in some states. We may see more of that impact in the July jobs report, if those spikes don’t go away before mid-month. A more immediate measure of the jobs market, weekly initial jobless claims, still indicates a high level of jobs destruction:

The number of claims has leveled off, but at a pre-COVID historically high level. The level of insured claims still paying actually increased slightly in the week before last, although it has been trending downward. Normally, one would expect that to indicate a stagnant job-creation environment, but these are not normal times. Plus, as Bloomberg reported yesterday, the states are still dealing with massive backlogs in these claims — so this may be an indication of May more than June, let alone the last couple of weeks.

U.S. employers added a substantial 4.8 million jobs in June, and the unemployment rate fell to 11.1%, as the job market improved for a second straight month yet still remained far short of regaining the colossal losses it suffered this spring.

The nation has now recovered roughly one-third of the 22 million jobs it lost to the pandemic recession. And with confirmed coronavirus cases spiking across the Sun Belt states, a range of evidence suggests that a job market recovery may be stalling. In those states and elsewhere, some restaurants, bars and other retailers that had re-opened are being forced to close again.

The re-closings are keeping layoffs elevated: The number of Americans who sought unemployment benefits barely fell last week to 1.47 million. Though that weekly figure has declined steadily since peaking in late March, it’s still more than double the pre-pandemic peak set in 1982. And the total number of people receiving jobless aid remains at a sizable 19 million.

All fair points, but that tends to drown out what the report actually does indicate. People are returning to the jobs market, and they are finding jobs when they do. Not all of them, and not all jobs may last, but this is a massive step in the right direction. It demonstrates a momentum back toward normalcy, and that is welcome news indeed.

Update: Donald Trump called it a “historic” result, and touted the jobs added for African-American and Hispanic workers: