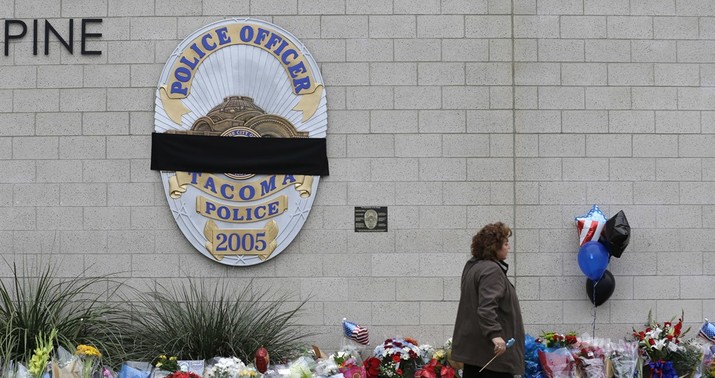 Add another name to the protests sweeping the nation. A coroner has ruled the death of an African-American man who died in the custody of Tacoma police a homicide. Manuel Ellis had reportedly assaulted officers before being detained, but complained while on the ground, “I can’t breathe.” That sounds similar to what happened to George Floyd in Minneapolis and Eric Garner in New York, even though the circumstances of those cases were different:

Police officers encountered Mr. Ellis, a musician and father of two from Tacoma, on the night of March 3 as they were stopped at an intersection. They saw him banging on the window of another vehicle, Detective Troyer said.

Mr. Ellis approached the officers, Detective Troyer said, and then threw an officer to the ground when the officer got out of the vehicle. The two officers and two backup officers who joined — two of them white, one black and one Asian — handcuffed him.

“Mr. Ellis was physically restrained as he continued to be combative,” the Tacoma Police Department said in a statement on Wednesday.

The detective assigned to the Ellis case told reporters that he doesn’t believe officers used a chokehold or a knee to the neck of Ellis. No one knows for sure, though, because none of the officers were wearing body cameras. The case has other curiosities, too, including the fact that Ellis was still breathing on his own when EMS arrived, at least according to the police. Forty minutes later, the 33-year-old man died anyway.

How does a 33-year-old man suddenly drop dead while still breathing when EMS arrives? The coroner ruled that the police detention caused the death, although Ellis did have other issues:

The situation may not be all that different from Floyd’s in the end. Recall that the first Minneapolis police description of the incident sounded a bit like the police description of Ellis’ arrest — a struggle while being detained, followed by a “medical incident” that resulted in death. Only after video from bystanders exploded into viral status did the police realize that something entirely different had happened to Floyd. Perhaps Ellis’ last minutes of life unfolded precisely in the manner Tacoma police describe, but … video sure would be handy to corroborate that, wouldn’t it?

Regardless, the coroner’s ruling of homicide at the hands of police will now push the case forward for prosecution. Troyer says the district attorney’s office will get the case as early as tomorrow. Public pressure for charging the four officers will be tremendous, especially in this particular moment, but a lack of video of the incident will make it tougher to overcome the traditional reliance of juries on police integrity. Still, the defense is going to have a tough time explaining away the death of a 33-year-old unarmed suspect by compression and restraint, unless they can undermine the coroner’s findings in court.

If nothing else, it underscores the power of video for accountability. Keep the smartphones handy, and perhaps more communities should be investing in body cams.

BREAKING: Gavin Newsom’s PlumpJack Winery Is Shutting Down This Weekend Due to “Logistical” Issues