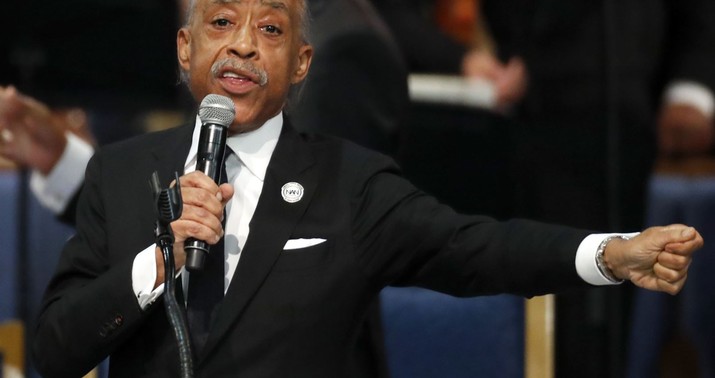 Thank goodness Minneapolis found some leadership at a moment of crisis. Amazingly, it comes from the family and friends of the man who died at the hands of police. After watching the city burn last night, George Floyd’s girlfriend Courtney Ross urged residents to stop looting and burning in his name, telling the media that Floyd “loved the city” and would be “devastated” by its destruction:

“Waking up this morning to see Minneapolis on fire would be something that would devastate Floyd,” said Ross, his girlfriend for the past three years and a resident of the city. “He loved the city. He came here [from Houston] and stayed here for the people and the opportunities. … Floyd was a gentle giant. He was about love and about peace.”

Ross said she wants everyone who took to the streets “to know that I understand their frustration. … I want people to protest in a peaceful way.”

Some of Floyd’s relatives echoed Ross’ sentiments Thursday through their attorney, Benjamin Crump, who has represented families left mourning the death of loved ones during police encounters.

“Looting and violence distract from strength of our collective voice,” Crump said in a tweet, followed by another that said, “George Floyd’s family wants peace in #Minneapolis — but knows that Black people want peace in their souls — and until we get #JusticeForFloyd there will be no peace.”

There’s no small amount of grace in those efforts. Of all the people who might have justifiable reason to seek revenge, Ross and Floyd’s family qualify. And yet, they are putting civic responsibility ahead of their grief and trying to save their community from further harm. If everyone had that impulse, we would see a very different city in Minneapolis than the one that got looted and burned overnight by people exploiting Floyd as an excuse for their own selfishness.

Floyd’s death has reverberated far past the confines of the Twin Cities, too. In Floyd’s native Houston, a visibly angry Police Chief Art Acevedo announced that he had instructed his entire force that “the neck is off limits” unless officers are in a fight for their lives — and for no longer than that:

Thus far, all is quiet today in Minneapolis, but that might be changing. Coming to the city today are those agents of calm and reason, Jesse Jackson and … Al Sharpton:

The civil rights leaders announced their visits in the midst of response to the death of George Floyd. …

Jackson’s likely to simply work with the local churches to strategize more effective protest and political pressure. Sharpton’s track record is quite a bit more complicated — such as in Crown Heights and in the Tawana Brawley hoax. Perhaps Sharpton will have learned a few things in the intervening years, but he has much more history as a firebrand than a fireman. We need a lot more of the latter at the moment in Minneapolis, both figuratively and literally.

My friend Scott Johnson writes at Power Line about how appalling the video of Floyd’s death was, but says that we need leadership to speak up for the rule of law now more than ever:

I don’t think that Chauvin’s knee to the neck of a suspect in custody is an authorized police maneuver. I haven’t heard any hypothesis that offers an innocent explanation of Chavin’s behavior. The video is sickening. Chauvin and his three colleagues were all promptly fired by Minneapolis Chief of Police Chief Medaria Arradondo. No one defends what happened to Floyd. No one justifies it.

Floyd’s death is under investigation by the Minnesota Bureau of Criminal Apprehension and the FBI. When the BCA investigation is complete, the file will be turned over to the Hennepin County Attorney for charging. The case has been assigned to Assistant Hennepin County Attorney Amy Sweasy. Sweasy is the prosecutor who secured the third-degree murder conviction of Mohammed Noor last year in the death of Justine Damond. I would guess that Sweasy will be closely involved with the BCA investigation. She was not impressed with its work in the Noor case. …

Fast-talking Governor Walz, “light-skinned Native American” Flanagan, former Nation of Islam leader Ellison — this is a parade of clowns and, in Ellison’s case, a malefactor. They go this far: they urge protesters to use masks and employ social distancing. Will any of them call out the violence for what it is and do something about it?

Don’t expect that message to come from Sharpton, at least not as a priority in his activism. Ross and the Floyd family, however, are putting out a superhuman effort to show leadership in a city in dire need of it.