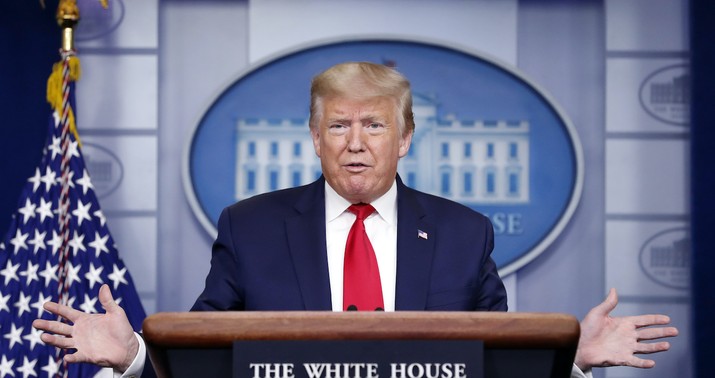 Inevitable, although one might have hoped that it would take a little longer than this. Donald Trump enjoyed a rally effect in polling on both overall job approval and in approval for his handling of the coronavirus pandemic early in the crisis. The White House hoped that his more serious tone and effective handling of the press in the early days would continue to impress voters enough to change the calculus of his political standing long enough to last at least through the election season.

Alas, it may not even outlast the flatten-the-curve campaign. Two new polls out this morning show Trump’s ratings flattening again on both questions as partisanship applies the normal floors and ceilings. First, ABC/Ipsos — which first detected Trump’s upward bounce — shows it deflating for the second week in a row:

Trump’s approval for his handling of the crisis continues to be underwater for back-to-back weeks. Last week, in a poll conducted from April 1 to 2, Trump’s approval sat at 47%, with disapproval at 52%. This week, disapproval among Americans is at 55%, with only 44% approving.

Those most recent numbers mirror attitudes towards his management of the crisis from the first ABC News/Ipsos poll on coronavirus, conducted from March 11 to 12, when 43% of Americans approved and 54% disapproved.

Partisanship also drives attitudes of the president’s handling of the outbreak. Among Democrats, only 10% approve of Trump’s handling of the coronavirus – nearly identical to last week’s 9% – which is also one third of the 30% of Democrats who said the same three weeks ago. Trump’s support among Republicans remains stable, with 89% giving him high marks, similar to last week’s 91%.

An overwhelming 90% of Democrats disapprove, similar to last week’s 91%, and 11% of Republicans disapproving, on par with last week’s 9%. Independents continue to trace the opinions of the country, with 43% approving and 57% disapproving.

At the time when ABC/Ipsos detected the upward swing in approval, I noted that the boost came largely from anti-Trump demographics. That could have either broadened his appeal or make the boost short-lived, I wrote at the time. It could still do both to some degree, but for the most part Democrats are returning to their anti-Trump impulses.

CBS News sees the same thing in its new poll, and correlates it to trust in Trump … broken down by partisan demos, of course:

Views on President Trump’s handling of the outbreak response have ticked down for the second consecutive week. The president is seen doing a good job by 47%, down four points from 51% last week and 53% the prior week. Now is the first time more say he’s doing a bad job than a good one. …

And for many partisans, rating the president now is not just about the metrics on containment. There appears to be a lot of built-up trust or mistrust of him more generally. Republicans, who think he’s doing a good job, said trust in his judgment was the biggest reason they approve. Democrats, who think he’s doing a bad job, overwhelmingly said they don’t trust that judgment.

Moreover, 40% of Republicans said another big reason they give him good marks now is that they’ve always been supporters; a similar percentage of Democrats who gave him bad marks said a big reason was that they never backed him in the first place.

This puts another meaning to “rally effect.” Yesterday, Allahpundit wondered whether the briefings did more damage than good to Trump, based on criticism from the Wall Street Journal that the briefings had begun to take on the air of his self-centric rallies. The answer, based on that CBS data, is that it’s probably serving the same purpose as rallies — keeping his base engaged while being pretty much neutral otherwise. If the partisan demos were going to slip away this easily, it wouldn’t have outlasted the need for the daily briefings, most likely.

The trend seems significant in the RealClearPolitics tracking on COVID-19 response approval:

This doesn’t include the CBS or ABC poll data yet, so when RCP wraps those into the aggregation, the split will become wider. The RCP tracker on overall job approval also hasn’t included the data from these polls, but that shows a pretty significant return to status quo ante norms as well.

What does this mean for the national election? Probably not much one way or the other. Had Trump held those demographic gains, it would have been devastating to Democrats, but in truth the judgment will be on just how many deaths got avoided and how much economic damage can be repaired by October. Plus, keep an eye on crisis-trust numbers if pollsters continue to ask that question. Trump might never sustain a 50% job approval rating, but if voters wake up to the consequences of putting a doddering Joe Biden in charge, those demographics might bounce back in Trump’s favor anyway — even if they don’t like him.